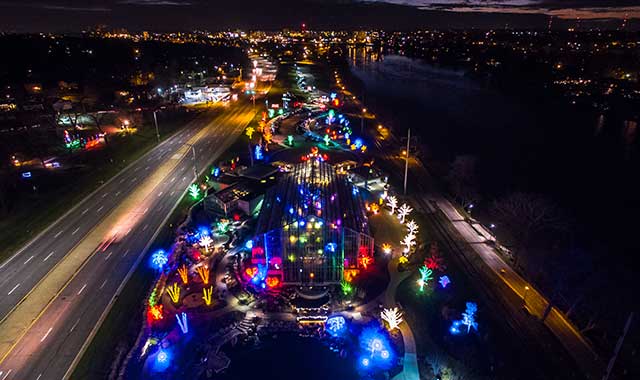 Combining the collection of the Command Post Restaurant and contributions from the community, this work-in-progress promises a major fixture in Rockford’s history.

Midway Village Museum is developing a new permanent exhibit to tell the story of Rockford’s Camp Grant and is in the process of collecting artifacts, stories and funds to move the plans forward.

“You’re in the Army Now: Camp Grant, Rockford’s Legacy,” is the name of the permanent exhibit that will be housed in a 2,500-square-foot exhibition hall at Midway Village Museum, 6799 Guilford Road, in Rockford.

“Camp Grant is a fundamental part of Rockford history, and the city changed so much because of Camp Grant,” says Luke Fredrickson, marketing director for the museum. “It’s meaningful to the veterans, their friends, families and the entire community. So, those stories and artifacts should be preserved and displayed at Rockford’s history museum, which is Midway Village.”

Early this summer, the museum launched a capital campaign to fund the construction of the future exhibit. A fundraising goal of $525,000 was established to allow for design, curation and construction. To date, about $150,000 has been raised and a total of $350,000 is needed to begin construction, Fredrickson says.

Executive Director Patrick O’Keefe adds that the exhibit will include videos, interactive stations, hands-on items for people of all ages, and hundreds of pictures and artifacts directly related to Camp Grant. The permanent exhibit will take up about 2,500 square feet in the main gallery building at Midway Village. One section will be updated regularly as new items are discovered and donated.

Inquiries from as far away as California have come in. Curator Laura Furman assesses every item for its authenticity, to stay true to the stories and artifacts that were actually a part of Camp Grant, O’Keefe says.

“We always ask for descriptions and photos because people sometimes think they have something to contribute, and it may or may not be authentic,” he says. “Stories and accounts of what happened can change over time as told from one generation to the next.

“What we are doing is unique,” he adds. “The story of Camp Grant has never been told before in this way, and it’s an important part of Rockford history and the service men and women who served our country around the world,” he says.

Other exhibit items include pictures and stories from those serving in the military, a bus depot sign, a bus stop bench, a stove from one of the guardhouses, souvenir pillow shams soldiers bought and sent home as gifts, and many civilian employment badges.

O’Keefe says there are stories from soldiers who kept personal records and wrote letters to loved ones at home.

A soldier named Ervin Bottlemy, from Harvard, Ill., was in Europe serving as a motorcycle messenger during World War I. He kept a journal, wrote many letters, received many letters and collected artifacts during his time in the service. His family has donated the entire collection to the museum.

The collection also includes some art pieces created by prisoners of war in Rockford.

“Many people are surprised to find out a part of Camp Grant was used as a prisoner of war camp,” says O’Keefe. “It wasn’t a significant part of the camp, but it’s a piece of history.”

As the United States entered World War I in 1917, the government built 16 Army Infantry Training Camps. The Rockford Chamber of Commerce campaigned for one to be placed in Rockford, and the result was Camp Grant, built 5 miles south of downtown on property that now includes portions of Chicago Rockford International Airport, Atwood Park and the village of New Milford.

Construction of the camp led to better roads, land development and an expansion of public services in Rockford. Camp Grant had trenches for infantry training, medical facilities, recreation buildings and hundreds of barracks. It provided thousands of jobs, served as a rallying point for local support of war efforts, and forever impacted the demographics of the community.

During World War I, tens of thousands of recruits trained at the camp, and thousands more were discharged there. Particularly notable was the arrival of 6,000 African-American soldiers, a dramatic demographic shift for the region. At the time, the Rockford community had only 200 black residents.

Much of the camp was dismantled after World War I, and what remained was used by the Illinois National Guard and the Civilian Conservation Corps. However, the onset of World War II saw Camp Grant reactivated with more than 300,000 soldiers passing through its gates, mainly to train medical personnel and house prisoners of war.

In 1948, the camp was turned over to the City of Rockford.

The Camp Grant collection got off to a good start when the former Command Post Restaurant closed its doors in 2020 and auctioned off its hundreds of Camp Grant photographs, documents and artifacts. The museum acquired many of them.

“A Camp Grant exhibit had been one of the museum’s long-term goals, but with the Command Post closing, it made the exhibit a much more urgent priority,” Fredrickson says.

Command Post owner Yolanda Weisensel, 85, said the pandemic was enough to convince her it was time to retire. She sold the restaurant more than a year ago and more recently sold the building.

She and her husband, Stanley, who died in 2017, owned the building for more than 25 years. The property, located around the former boundary of Camp Grant, started out as a restaurant and dance hall.

The couple spent their weekends going to antique stores, flea markets and other sales to find anything about Camp Grant or the World War eras. When the couple sold the business, they let go of all the artifacts they had collected through the years.

People enjoyed looking at the pictures and other artifacts, but they came back for the biscuits and gravy and homemade chicken noodle soup, a couple of the most popular items on the menu.

“We don’t ever want to forget that our soldiers died for us,” Weisensel says. “We have to remember the past so we don’t forget the supreme sacrifice those serving our country accomplished for us. It’s difficult to think about what these men went through, but it’s important to remember. I hope that I have helped people to remember.”

With the Camp Grant exhibit, she’s pleased to see the past will not be forgotten.

“We are very thankful the family-owned business did such a great job of preserving the artifacts they had on display in the restaurant,” Fredrickson says.

The museum’s mission statement is to collect, preserve and interpret the history of the Rockford region, so people can understand how the events of the past were meaningful at the time and how they impact life in Rockford today.

The Camp Grant stories and artifacts leave a lasting impression on many, and they’ve received plenty of support from local veterans groups.

“I’ve learned how much Camp Grant has changed Rockford over the past 100 years,” says Fredrickson. “It was a boon to the economy when it was built in 1917 and then expanded during World War II. Buildings and roads were built using local labor and supplies, and many of the soldiers who came to Rockford ended up staying here and added to the diversity of the community. Rockford would have been dramatically different without Camp Grant.”