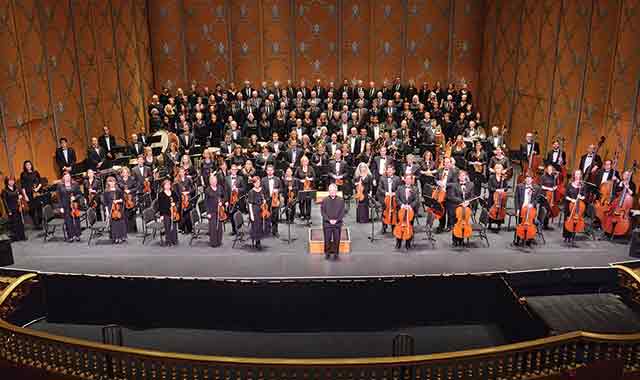 For more than seven decades, Rockford Choral Union’s annual production of ‘Messiah’ has endured, connecting people with the spiritual side of Christmas.

A Rockford tradition is helping people tune into a more peaceful, meaningful and spiritual side of Christmas.

“Messiah” is the beginning and the focus of the Christmas season for many people, says RCU President Dale Johnson. “Messiah” has endured, he adds, because of the message and the great music.

“There are times in our lives when we feel disconnected from one another and experiences like the pandemic gave us a feeling of hopelessness and doom,” Johnson says. “But God, through Jesus Christ, has communicated to us his unconditional love and gives us hope, regardless of what is happening. Audiences feel uplifted and energized by the production.”

“We give this gift to the community to help celebrate Advent and the Christmas holiday,” he says. “It’s an important message to those in need of spiritual renewal.”

Beert, a cellist with the Rockford Symphony Orchestra, has played the cello for the annual production for 33 years, serving as the RCU conductor for the past three years.

“As a cellist, I see how important it is for the conductor to get the musicians to not only play well and be in tune with each other, but also make sure the message comes out clearly,” he says.

Soprano Susan Nelson, of Chicago, sang with RCU in 2019 and 2022 and has also performed in the choir and as a soloist for “Messiah” many times throughout the Chicago area. She says it always offers something new to audiences, whether they attend every year or hear it for the first time.

“For so many people, ‘Messiah’ is a tradition,” Nelson says. “Even before I started singing, I was familiar with the music because it has been a part of my whole life.”

The production features a 15-piece chamber orchestra, an organist, four soloists, a harpsichordist, and up to 100 voices representing many churches and faith organizations in the Rockford area and beyond.

Nelson enjoys performing in Rockford because, although some cuts are made to shorten the performance, the entire story is told, and the story is more meaningful each year.

“As we get older, we get more sentimental,” she adds. “When I first performed ‘Messiah,’ I thought mainly about how I was singing. Now, I am so comfortable with what I am doing, I have the freedom to be more expressive and can think about meeting the expectations of those in the audience.

“Depending on where people are in their lives and who is performing the production, there is always something new for listeners to hear, even if they are familiar with the music,” she adds.

“When they hear the Biblical text spoken at church, they will reconnect with the musicalexperience that enriches their lives the entire year.”

RCU, at one time known as the Lutheran Choral Union, was established in 1945 for the sole purpose of performing “Messiah.” Seventy-seven years later, the annual tradition has been heard 199 times, except in 2020 during the pandemic. Emmanuel Lutheran Church was its first home before moving to Trinity Lutheran Church for many years.

The move back to Emmanuel Lutheran was made three years ago to avoid congestion related to Stroll on State, also scheduled for the Thanksgiving weekend. The crowds at Stroll on State created parking problems and discouraged attendance, Beert says.

The frequency of performances has been reduced from three to two, eliminating the Saturday night performance. The afternoon concerts are better attended, Beert says.

Last year’s COVID requirements and scaled-down version of “Messiah” didn’t deter people from enjoying the concert, which was livestreamed for the first time.

“We were surprised, if not shocked, by how many people came to the concert in spite of having to wear masks and social distance,” Johnson says. “People live life under the assumption they are in control, but the pandemic reminded us we are not in control of much around us, so the ‘Messiah’ was one way people could move forward with hope because of the story being told about God’s promise that He is always with us.”

Johnson is a retired Lutheran pastor. Before going to college, and now during his retirement, he has sung with the choral union. He first attended a performance of “Messiah” when he was 12 years old and remembers being moved by the music and the message. He played the French horn in high school and college bands.

“Messiah” is an English-spoken oratorio. The musical composition tells a sacred story with voices and orchestra about man’s sinful nature and Christ’s redemption. With 79 scripture references from the Old and New Testaments, Charles Jennens, an author and friend of Handel, compiled the text from the King James Bible and from the version of the Psalms included with the Book of Common Prayer. Part I of “Messiah” begins with prophecies of Christ’s coming and the annunciation to the shepherds. Part II focuses on the Passion and ends with the famous and well-loved Hallelujah chorus. Part III covers the resurrection of the dead and Christ’s glorification in heaven.

First performed in Dublin, Ireland, in 1742, the work has become one of the best-known and most frequently performed choral works in western music.

Beert says Handel was commissioned to write the piece for the opening of an orphanage and hospital in London and worked on the music nonstop for several weeks.

“He was not only meeting a deadline, but his composing was also a true moving of the spirit,” he says.

Handel wrote the oratorio in 1741, after coming to London in the 1700s to write opera. He was well-versed in Italian opera, which was the focus of his career, but then the musical tastes of audiences changed. New operas were being written in the form of English folk tales and the changes in the monarchy wanted music to express the politics of the day, which was a move toward Protestantism.

“Handel had to adjust,” Beert says. “Instead of writing opera, he reinvented the oratorio, making it something the aristocracy could support and enjoy. After hearing the first ‘Messiah’ performed in London, King George II stood up for the Hallelujah chorus because he was so moved by what he heard.”

Oratorios differ from opera in that they are religious in topic and require no scenery, costumes or acting.

“Handel was all about trying to express what was happening in Jesus’ life from the prophecies of the Old Testament to Revelation, through words and music,” Beert adds. “Baroque composers, like Handel, were most interested in conveying emotion as a story is told.”

There is no admission fee and a free-will offering will be received. Masks are recommended, but not required.