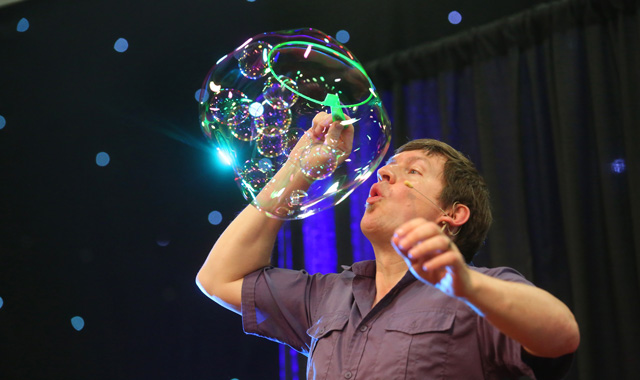 The Sweet Corn Festival is more than just a beloved Illinois tradition. It is a touchstone for the town, drawing residents, expats and visitors downtown each and every year.

It’s for these reasons that she flies back to her hometown of Mendota, Ill., every summer to be part of the annual Sweet Corn Festival.

“I’ve been to almost every one,” says Kraus, who, after graduating from high school and college, lived in Rockford before moving to Cocoa Beach, Fla., 12 years ago.

The annual Sweet Corn Festival celebrates its 75th anniversary this summer as it overtakes the streets of downtown Mendota, a community of just under 7,300 that’s located 2 hours southwest of Chicago.

“We close off roughly eight blocks of downtown,” says Shelby Weide, president and CEO of the Mendota Area Chamber of Commerce and the event’s chief organizer. “The street department does a phenomenal job getting the streets ready to roll. And we’ll get between 55,000 to 60,000 people for the weekend.”

“My husband is from Milwaukee and he loves it as much as me, maybe more,” says Kraus. “He gets a kick out of how everybody knows everybody else.”

Part of that is because everybody with Mendota ties is there.

“Growing up here, that is a big class reunion weekend,” says Weide, also a Mendota High School graduate. “You just know to come home that weekend and you see not only people from your class, but all the classes around you. It’s a great family weekend.”

It’s a family weekend to some, but for others, it’s become a longstanding tradition.

“This will be my 75th,” says 93-year-old Marian Hochstatter, Paulette Kraus’ mother. “I remember the first one and it really hasn’t changed a whole lot. They used to have it out at the fairgrounds, and now it’s downtown. It’s so much nicer downtown.”

Hochstatter’s memories include going with her husband. “He was my boyfriend then,” she says. We liked the Ferris wheel.”

“We didn’t worry about our figures back then,” she says. “I also knew most of the girls in the pageant because they went to school with our kids.”

At any age, the Sweet Corn Festival has been all about creating memories.

“For us, it was always the last thing before school started,” says Weide. “You’d go with your friends when you were a kid. Then when you got older, your parents would let you come downtown by yourself with your friends. I’d ride rides and eat all the junk food I wanted and then go home and hang out with my girlfriends the rest of the night and turn around and do it again the next day.”

But as evidenced by the thousands of people who attend the event every summer, the festival is not just for Mendota natives.

“We draw people from the Chicago area, Rockford, Bloomington, Ill., Normal, Ill., all over,” Weide says. “We’re one of the biggest harvest festivals in the area, and if you haven’t been here, it’s a great weekend to come.”

The festival website, sweetcornfestival.com, lists several hotels and motels, as well as campground information, for those planning an extended stay.

The biggest draw of the weekend is in the name: sweet corn. There are vendors throughout the weekend who sell it, but on Sunday, the festival offers all the sweet corn you can eat for free.

“We bring in an old steam engine, and that’s how the corn is cooked,” says Weide, who estimates that more than 50 tons of sweet corn will be consumed over the weekend. “We have a huge vat, and the steam engine is powered by fire.”

And the corn is delicious. It’s a food that can’t be duplicated anywhere else.

“Growing up in the Midwest, you take that sweet corn for granted,” says Kraus. “After moving to Florida, I bought some sweet corn one time, and it was the last time. “Unless you move away, you don’t realize how good that sweet corn is.”

The other big highlight of Sunday is the parade.

“We invite area high school bands, including our local grade school and high school bands,” Weide says. “We have a bagpipe group, the Jesse White Tumblers, the South Shore Drill Team and a couple other drill teams as well.”

There are also floats, along with antique and classic vehicles.

“When we lived in Rockford, we would take the kids, especially for the parade, because they gave out candy,” Kraus says. “Still to this day, my daughter will come down from Rockford just for the parade.”

In recent years, the festival kicked off earlier, on Thursday.

“In the last five years, we added a special event called A Special Day for Special Kids, which takes place on Thursday, before the carnival opens.” Weide explains. “We open it up to people with special needs. Sometimes, kids and adults who have difficulties may be uncomfortable with the lights and the sounds and the crowds. The carnival opens up a few rides and some of the vendors will open, too. They get to experience the carnival that way.

“If you have a child that fits that category, we allow the whole family to attend,” Weide says.

The Sweet Corn Festival officially opens at 6 p.m. on Aug. 11, after A Special Day for Special Kids.
The Carnival Midway is open 6 p.m. to 10 p.m. on Thursday, noon-10:30 p.m. on Friday and Saturday and noon-6 p.m. on Sunday. People can purchase a wristband for unlimited rides. There are also daily passes available, and there’s a “mega pass” that covers the whole weekend. Those can be purchased online or at the Chamber of Commerce office. They’ll also be available throughout the weekend at the festival.

There are plenty of rides provided for kids, including the flying teacups, a large slide, the Dragon Wagon and a fun house. A Ferris wheel and a carousel are on hand for those who like to take it easy. Memorable carnival rides are there, including the Zipper, Zero Gravity, Cliff Hanger and the Sizzler.

The crafters market and flea market take place on Saturday and Sunday, featuring food, baby items, home decor, scents, pet items, wooden items, sewn items and yard decor, along with collectibles, books and antiques. Altogether, there are between 180 and 200 vendors.

The Sweet Corn Queen pageant takes place on Friday night at 7:30 p.m. “That is a time-honored tradition,” says Weide, who, along with Kraus, was a contestant at one time. “Girls from Mendota are sponsored by our local civic organizations like the Rotary, Women of the Moose and the Quarterback Club.”

This year, to honor the 75th anniversary of the festival, all past queens have been invited back to take part in the event. And there is a mini king and queen pageant on Saturday.

There’s also a 50/50 raffle; people can purchase tickets in advance online as well as throughout the weekend. The drawing is live on Sunday afternoon. Last year, the winner took home more than $15,000.

And, this year they are adding a bags tournament.

Weide says some parking lots around the festival grounds may charge a small fee, but parking on the streets is free. There are two ATMs located downtown for those who want to use cash. Some vendors do not take credit cards.

“When you were a kid growing up in Mendota, the Sweet Corn Festival was like Christmas.” Kraus says. “You looked forward to it. You’d get with your neighborhood friends and head downtown and go on the rides and get your taffy and your corn dogs and carny food.”

“It’s funny. As I got older and I moved away, I realized how lucky I was to be raised in that small town,” Kraus adds. “The Sweet Corn Festival was a big part of it.”