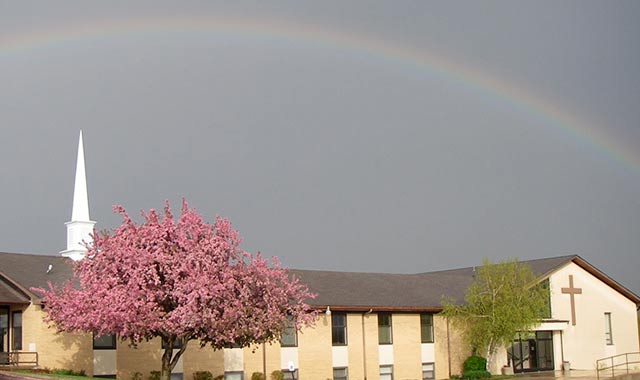 It’s not very often that a community redevelops its main library from the ground up. So, Rockford Public Library is taking its unique opportunity to build the library of the future. Take a sneak peek inside, and find out what it takes to reimagine this critical community asset.

Just like a good book, Rockford Public Library’s (RPL) future is unfolding one chapter at a time as it celebrates its 150th birthday this year and plans to open a brand-new main building at the historic location, 215 N. Wyman St.

Despite a few bad weather days and all the difficulties related to the pandemic, the library is on track to open in Fall 2023. The clean-up of contaminated soil that prompted the razing of the old main library is completed and groundbreaking for the new building took place Oct. 20.

“I feel very good about the future,” says RPL Executive Director Lynn Stainbrook. “I think we’re moving into a new role for the library and will become even more vital to the community.”

The rising cost of materials forced the library to reopen bids in February, in hopes of getting more competitive pricing for the construction jobs not yet contracted.

“We made changes to our bid packages, we’re still reviewing bids, and we’re changing some of the details in our plans to hold down rising costs without changing the basic building plan or the priorities set by the community,” Stainbrook says.

The library board hosted many ‘envisioning’ sessions with the public. It met with community leaders, conducted surveys, visited public schools and other local organizations to gather input about what people want in their new library.

Local history, the children’s area, new releases and other collections are among top priorities, along with making good use of the riverfront location, Stainbrook says.

The $33 million project includes a three-story, 66,000-square-foot building with many floor-to-ceiling windows and covered (not underground) parking on the street level for 20 cars, and a drive-up area to return books or pick up ‘on hold’ materials. More parking in the form of city lots and a couple of parking ramps are nearby.

The architects for the project are Engberg Architects of Milwaukee, who have designed more than 180 libraries. They’re working in partnership with Rockford’s award-winning Gary Anderson Architects of Studio GWA.

The new library will be about 20,000 square feet smaller than the old one, but the space will be used more efficiently, Stainbrook says.

“The older building had been added onto so many times, there was a lot of wasted space, and some things we chose not to duplicate,” she says. “There will be no auditorium in the new library because we have one at our Nordlof Center, across the street, at 118 N. Main St.

“There will be lots of landscaping and walking paths for bicycles and pedestrians. The space once used for parking will be much more people-friendly and centered around the beauty and enjoyment of the river,” she says.

The library is working with the Rockford Park District to form a cohesive riverfront with Davis Park to the south.

In addition to attempting to control costs, experts are in the process of figuring out how much more money they’ll need once the new bids are in, and ComEd will be asked to come up with additional funds, Stainbrook says. ComEd is paying for the entire remediation and rebuilding project, with a portion of all ComEd customer utility bills going toward remediation projects throughout the state, Stainbrook explains.

The first floor of the new library will be devoted to staff offices, Friends of the Library bookstore, a children’s area, and a section for newly released books and audio-visual materials. The second floor will include fiction and non-fiction books, a teen and gaming area, a reading room with windows overlooking the river, multi-purpose rooms, and a patio off the Maker Lab, a room that contains tools, machines and other components for people to create or work on projects.

Stainbrook says the Maker Lab was introduced at the Hart Interim Library, 214 N. Church St., and spaces like it are popular in many libraries today, because they help to reach people who learn better by doing things hands-on.

“At one time, libraries were thought of as ‘the people’s university,’ and all the learning came from books,” she says. “The library of the future is about meeting the needs of all kinds of learners, which includes printed books, digital books and e-books, as well as other resources.”

The third floor will house the local history collection, staff work areas, three meeting rooms that can also become one large space, and a deck overlooking the river.

While the library celebrates its 150th anniversary this year, it’s partnering with Rockford Art Museum, 711 N. Main St., for a current exhibition that runs through May 29, called “Buzz Spector: Reading Matter.”

The artist shows his large-format Polaroid photographs of books from his own library and various public and private collections. The exhibit reveals the range of Spector’s interest in books others read or collect. Also on view are his drawings and prints, dating back to the 1970s. The centerpiece of the show is a sculpture made exclusively for the exhibit. The sculpture is in the shape of the Rock River and made from 5,000 recycled hardcover books donated mainly from the Rockford library and from Evanston Public Library.

A Friends of the Library book sale takes place June 4, on the grounds of the art museum, featuring books that were in the exhibit. There’ll also be food trucks and a kickoff for the annual summer reading challenge.

The Rockford Public Library recently learned it will receive $50,000 in grant money as part of an initiative to provide libraries across the state with funds to help combat the problems caused by the pandemic, specifically regarding the development of resources for the local workforce.

The original Wyman Street library opened to the public in 1902, built on land once owned by Rockford Gas, Light and Coke, which operated a manufactured gas plant (MGP) there from 1856 to 1898. The byproducts of MGP operations are typically coal tar, purifier waste and petroleum products.

In the 1960s, ComEd acquired Rockford Gas, Light and Coke and, in 2010, conducted an environmental study of the library site, in cooperation with the Illinois Environmental Protection Agency. Contamination in the soil and groundwater was found under the library, which led to the decision to demolish the building and clean up the contamination.

The main library closed in November 2017 and moved to the interim location in December 2017.
Recycling and reusing as much of the building as possible was important to both ComEd and the library.

Less than 7% of materials ended up in the landfill after a public auction was held to allow businesses and individuals to buy lights, wall paneling, machinery and other items. All proceeds of the sale went to the Rockford Public Library Foundation.