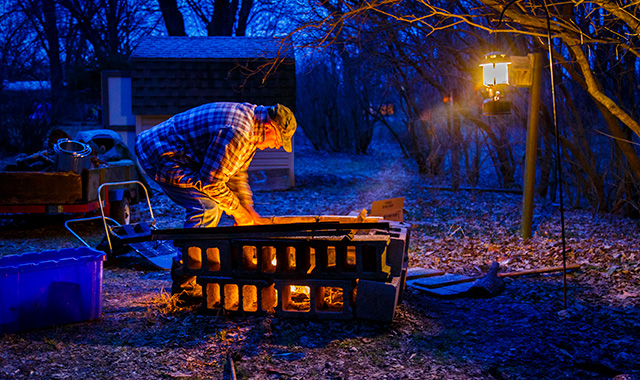 It sat vacant for nearly four decades, and now, Belvidere’s Funderburg House is ready to welcome the public back into its time capsule environment. Lovingly preserved, it’s a telling reflection of two families and the history that unfolded behind these walls.

On the third floor of Funderburg House, in what’s known as the travel room, a slide projector sits on an ornate table, flanked by a small couch and a comfy set of chairs. A screen sits at the front with a small, worn leather satchel perched beside it. The room looks as though guests could glide in at any moment, cocktails in hand, ready for Alice Funderburg to start a slide show highlighting one of the countries she and Hugh just visited.

“Alice Funderburg traveled the world,” says Anna Pivoras, executive director of the Boone County Museum of History, which now owns the Funderburgs’ home. “This little projector could have been sitting on this table since at least the 1960s.”

For more than two years, Pivoras has been preparing this old home to meet the public. Few people had been inside the home in nearly four decades when Alice and Hugh’s grandson, R. Robert Funderburg Jr., orchestrated its donation to the Boone County Historical Society.
“It’s kind of like a time capsule house,” says Pivoras, gesturing around the travel room. “This is how Alice set it up. I haven’t moved a thing.”

To understand the story of the Funderburg House, you need to float through time, moving forwards and backwards, zooming in and out of each detail as you go. Each room tells a different story about a specific time in the past. That’s just the way Pivoras wants it. When the home opens to visitors this spring, the public will find rich details and hundreds of artifacts that bring to life the two families who once resided in this old stone building at the corner of North State Street and East Boone Street, in Belvidere.

“When you have a house that has 80 years of occupancy, that’s eight decades of different styles,” says Pivoras. “I didn’t want to ignore any of them. I wanted to go room by room, pick a decade, and stick to it.”

Unlike most stories, the best starting point isn’t at the beginning, but rather 115 years after Funderburg House was built. In 2019, R. Robert Funderburg Jr., a local philanthropist, former chairman of Alpine Bank, and current chair of K-B Farms Inc. donated the house to the Boone County Historical Society, along with $1 million for its restoration and upkeep.

“The donation was Rob’s brainchild,” says Pivoras. “He worked closely with the K-B Farms board to get everything underway.”

K-B Farms, formerly known as Keene-Belvidere Canning Co., was bought by Hugh Funderburg a few years after he started there as a manager in 1911. He scrimped and saved his monthly salary until he could buy full stock control in 1925. He sold the canning facilities to Green Giant in 1944, but retained the company’s farmland and evolved into a real estate investment company, thus becoming one of the state’s largest landholders. Hugh was also Chairman of Farmers National Bank, which later became Alpine Bank, a local institution run by three generations of Funderburgs and sold to Midland States Bancorp in 2018.

The Funderburgs remain a familiar presence throughout Boone County. Their foundation regularly contributes to charitable causes. Funderburg Stadium, located at Belvidere High School and named after Hugh, was almost entirely built from contributions by Rob’s aunt Barbara and his father, Bob. Though the family is known by many, the story of their original home was, until now, known by few.

Hugh moved into the house with his wife, Alice, in 1934. They raised their three children and took pride in their home. Walking through it today, you can almost see the mischievous kids playing with the kitchen’s dumbwaiter and hear the extravagant dinner parties hosted by Hugh and Alice. After Alice’s death in 1985, about 24 years after Hugh died, the family intentionally left the old stomping grounds empty, preserving the memories created there.

“This house was vacant for almost 40 years,” says Pivoras. “In that time, nobody had a chance to see it. We’re so excited to welcome people back.”

K-B Farms’ donation stands as the largest in the Boone County Historical Society’s 86-year history. That, in and of itself, is special. But what really intrigues Pivoras are all the clues its occupants left behind.

Katherine Fuller-Rhinehart was the daughter of Allen C. Fuller, a judge who was adjutant general of Illinois during the Civil War and elected to the Illinois House of Representatives after the war.

The Fullers were the richest family in town and, when her father died in 1901, Katherine was left with his $1 million estate – a value of more than $32 million today.

With her newfound wealth, Katherine built a home for herself and her two children. It had not been an easy life, up to this point. Her husband, Thomas, was already out of the picture and her first-born, Allen, had died of winter cholera in 1886.

She spared no expense on the new home, commissioning Charles Wyman Bradley, one of the most sought-after and renowned architects of his day. Bradley was behind several local landmarks, including Veterans Memorial Hall in Rockford and the Bel-Mar Country Club in Belvidere. Bradley almost certainly had an impression on Kathrine’s son, Frank, who designed Belvidere’s Apollo Theater, located just down the street.

“I’m fascinated by Frank Rhinehart,” says Pivoras, standing in the middle of what was once his bedroom. “He was a World War I vet. He trained at Camp Grant. But he was also a theater buff. He started the Belvidere Amusement Company and built the Apollo Theater.”

Katherine lived in the house until her death in 1927. The house sat vacant until 1934, when Katherine’s daughter, Ida, sold it to the Funderburgs.

The latest chapter in this home’s history begins with Alice Funderburg’s death in 1985. Though her house stood empty for nearly four decades afterward, it was by no means deserted. Alice’s descendants continued to check in, hiring maintenance workers to take care of the home’s general upkeep.

“The Funderburgs were very fastidious about repairs,” says Pivoras. “When we announced the donation, a lot of people were surprised. They didn’t know the house was vacant. Structurally, it was almost perfect. We’re very fortunate to have a house that was so loved and cherished by everyone who lived here.”

The decades of loving care made it that much easier to convert into a museum, but some change was inevitable.

“We’ve done a ton of work,” says Pivoras. “Every single surface has been restored. Every single wall has been treated in some way.”

For Pivoras, the work isn’t just about preserving the space, but also the love and respect it has enjoyed from the very beginning.

“When I first walked in, there were rugs on every floor and every single window was covered with at least three layers of drapery that had deteriorated over time,” Pivoras says. “It looked like it needed some TLC, but I thought, ‘This is so beautiful.’”

The to-do list was staggering. The original plumbing had to be updated, including the house’s five existing bathrooms. A sixth bathroom was added to provide wheelchair access, along with an outdoor elevator at one of the entrances. A new elevator meant installing a new electrical system. An HVAC system was added, then hidden, to maintain historical accuracy.

Along the way, Pivoras continued digging through the layers of history, striking gold with each new find.

“One day, as we were peeling wallpaper, we found a pencil sketch that was made by the original builders,” she says. “They were just having fun, doing these little doodles that were covered up, and here we are, finding them more than a century later.”

Now, the end is in sight. With only a few tasks left, Funderburg House will be ready to greet visitors by early spring. Pivoras is confident visitors will see the labor of love.

“We put a tremendous amount of care and consideration into every single decision we made,” she says. “We wanted to balance the historical nature of the property and honor that, but we also made it a functional and safe environment for the public.”

While programming and public viewing are still being planned, Funderburg House is already available to schedule rentals. Event planners interested in hosting private functions can book the house as a unique venue for their celebrations. It will also be a place for local artists to display and sell their artwork. Two rooms on the second floor have been converted into art galleries, an effort the Boone County Historical Society created in conjunction with the Boone County Arts Council.

Once the museum is open, Pivoras hopes to give visitors the time-travel experience she’s been working toward.

“Our tour programming is going to be so fun,” says Pivoras. “We’re taking a non-traditional approach to a historical house museum.”

That approach will include as few velvet ropes as possible, putting visitors right in the rooms, able to interact with the furnishings.

“We want our visitors to feel like they’ve been invited into someone’s home,” says Pivoras. “We want you to sit in the furniture. There will be things for you to touch, and interact with. We want you to feel like it’s a hundred years ago.”

After all the work Pivoras and her team have put in, that immersive experience already feels in place. Strolling through the rooms, one almost expects to see Katherine Fuller-Rhinehart relaxing in the music room or Hugh Funderburg writing at his desk.

“I was one of the first people from our museum to walk through that door,” says Pivoras, pointing to the home’s main entrance. “Calling this a dream come true doesn’t do it justice.”

At the end of the tour, Pivoras stops in the dining room and places her hand on an ornate sideboard table.

“This sideboard was part of a 16-piece dining room set from 1937,” she says. “It was a wedding gift from the Funderburgs to one of their employees, and then it was donated back to us. Somehow, it found its way home. Everything in this house has a story to tell. We can’t wait to share with our visitors.”

Explore Further
Just down the road from Funderburg House, at 314 State St., is the Boone County Historical Museum. Since opening its doors more than half a century ago, the museum has grown to encapsulate an entire city block, with three floors of exhibits dedicated to the history of Boone County. Here are just a few of the exhibits visitors can find there:

World War I Exhibit
Visitors get an up-close-and-personal look at a soldier’s life during The Great War, with patriotic posters from the period and a replicated trench, complete with officer quarters.

Celebrating 50 Years of Judi Ford
Focusing on Miss America 1969, this exhibit discusses Belvidere native Judi Ford’s life and accomplishments, before and after her reign.

Melvin & Mildred Banks Gallery
This conservation and photography gallery is named after Melvin Banks, a farmer, businessman, philanthropist, and passionate conservationist, and his wife, Mildred, a photographer whose collection includes more than 35,000 slides and prints.

History of Farming in Boone County
An interactive kids’ exhibit featuring a milkable cow, a farmers market and other displays designed to teach about farming and its place in Boone County’s history.