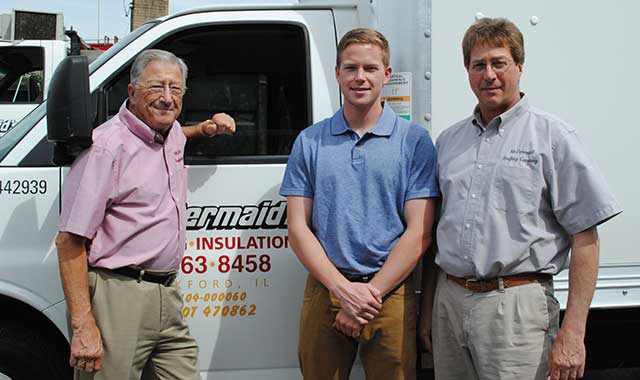 A weekend’s journey is closer than you might think. Check out these fun destinations that are close to home but still feel so far away.

Visit Rock Falls: The Family Spot that Remembers its Past

Rock Falls has been on the map for generations, and many of those generations don’t want to be anywhere else.

“We have super, duper family-run restaurants that have been around for 20, 30, 40 years,” says Melinda Jones, Director of Tourism & Events for the City of Rock Falls. “A lot of our restaurants have been run by the same families since the beginning.”

That is a common theme in Rock Falls, located along the Rock River, in the heart of northwest Illinois. It’s the kind of place that makes residents, and some visitors, prefer to stick around.

“We had a girl set up a boutique booth during one of our summer events and she never left town,” laughs Jones. “She now has a store in Rock Falls and she’s doing great.”

With everything the town has to offer, the reason for this phenomenon is no mystery. No matter what time of year it is, there’s always something to do in Rock Falls.

For art enthusiasts, the year-round Art in the Park Sculpture Walk is a must-see. Located in beautiful RB&W Park, this attraction features work from artists all over the country. The sculptures are changed once per year, except for “Nemesis,” a metallic angel that was purchased from a participating artist in 2019.

“The other sculptures are from all over, including Colorado, Missouri, Indiana and Maryland,” says Jones.
RB&W Park stands on the former grounds of a factory owned by RB&W Manufacturing.

“When the factory closed, it was decided to make it into a park,” says Jones. “Grants were put in place to get the area cleaned up, and now it’s absolutely fabulous.”

The result is one of seven public parks in Rock Falls, and each one offers amenities for year-round outdoor fun. For trail enthusiasts, Hennepin Canal Parkway State Park is a haven for biking and hiking in the summer and cross-country skiing, snowshoeing and snowmobiling in the winter.

In addition to being a fun destination, Hennepin Canal is an engineering marvel and just one of many Rock Falls landmarks with a rich history. The Firehouse Ministries Fire Museum takes visitors back in time with vintage equipment, compelling photos and actual fire trucks from Rock Falls’ past. The Little Red School & Historical Museum shows modern students just what it was like to learn in a one-room schoolhouse.

For holiday visitors, Rock Falls has several events the whole family can enjoy.

The Rock Falls Chamber of Commerce hosts its annual Hometown Holidays in late November, featuring wagon rides, a visit from Santa and a Christmas tree lighting in RB&W Park.

The Holiday Light Display at Centennial Park is open every Friday, Saturday and Sunday in December, from 5:00 p.m. to 8:00 p.m.

“Last year was our first year doing it,” says Jones. “It was a huge success.”

In addition to stunning light displays hosted by local businesses, the event also features live performances by the town’s church choirs and a visit from Santa and Mrs. Claus.

Like Santa himself, Rock Falls has plenty of surprises just waiting to be enjoyed. No matter what time of year you visit, you’ll be sure to find something that will make you want to stay.

Starved Rock Lodge: Kick off the Holidays with a Little Retreat

If you haven’t been to Starved Rock Lodge at Christmastime, this is a year to visit. The new theme for the 2021 holiday season has been kept “under wraps,” but Santa’s elves have been hinting that children are going to love it.

The Main Dining Room is decorated after the Thanksgiving Dinner Buffet is enjoyed by guests from near and far. The giant two-sided fireplace is aglow as families gather for group photos and get-togethers. Face masks are still required in public spaces within this historic destination, but guests tell us that being together is priceless.

The Lodge is happy to announce that Sunday Brunch is back. The ambiance of the log cabin aesthetic in the Main Dining Room welcomes families, guests and locals. Reservations are recommended.

“Classic Crooner” fans will love the Christmas matinee and evening shows set for Dec. 13 and 14. Tickets are $44. Each show includes a lunch or dinner buffet and reservations are required.

This year’s New Year’s Eve theme is “Throwback Prom,” and there’s no telling what favorite memories from pre-millennium proms will resurface. There will be two bands, appetizers, a lavish dinner buffet, pastries, a midnight toast and more. Champagne and party favors are included in the package along with an overnight stay and the chance to win a vacation voucher. The complete New Year’s Eve Party Package is $600 per couple. Reservations are required and guests must be 21 to attend.

Christmas Lights Trolley Tours are a great way to relax and let someone else do the driving while you enjoy the beauty of the season at night. You’ll get to tour Rotary Park, where hundreds of illuminated displays are sure to put you in the holiday spirit. Reservations are required. Tours run Dec. 10-12 and 17-19. Tickets are $20 for adults and $10 for children 10 and under.

Enjoy DeKalb County: So Much to Do and See in the Early Winter

Visitors to DeKalb County don’t need to ask what they should do. Just what they should do first.
“We have so many options,” says Katherine McLaughlin, marketing specialist for the DeKalb County Convention and Visitors Bureau. “We have three ice rinks, four sled hills, a ton of hiking and 17 forest preserves, the largest one being just under 400 acres.”

And that’s just the outdoors fun. Each of the county’s 14 communities has its own distinctive downtown area with a variety of locally owned shops and restaurants. Belly up to the bar in any of DeKalb County’s local taverns and there’s a good chance you’ll be able to sample locally sourced and produced libations from a local distillery, two (soon to be three) breweries and two wineries.

And then there’s the area’s arts and culture scene.

“You can visit the Pick Museum of Anthropology,” says Brad Hoey, special projects manager for the DeKalb County Convention and Visitors Bureau. “We have the NIU Art Museum, which is in Altgeld Hall, the ‘Castle on the Hill.’ And then, of course, there’s the historic Egyptian Theatre.”

The Egyptian is a landmark in downtown DeKalb. Built during the apex of the nation’s obsession with Egyptology following the discovery of King Tut’s tomb, the theater is one of the last remaining venues of its kind.

“Last year, the theater completed a multimillion-dollar renovation,” says Hoey. “Now, they’re able to be open year-round for the first time in 91 years. It really is a gem.”

Another gem is the Sandwich Opera House. Built in 1878, the opera house began its life as a full-service community center, housing offices for the mayor, city clerk and the marshal, judge’s chambers and five jail cells – in addition to a performance space. The building still houses city government offices, but it also offers a full season of live entertainment.

One of the many things that makes DeKalb County unique is the fact that it is one of the few places in Illinois, outside Chicago, that hosts a major university. Northern Illinois University attracts students from across the region, the nation and the world.

“The impact is pretty astounding,” says Hoey. “It goes beyond the fact that we have around 15,000 or 16,000 students here. It impacts the entire region. We have the best of both worlds. We live an hour outside of Chicago, but we have just as much to offer when you think of the diversity we have and the arts and culture that we have.”

NIU also brings a host of major sporting events, including NCAA Division I athletics and the Illinois High School State Football Championship, which comes to town around Thanksgiving.

All who visit DeKalb County will be spoiled for choice, so much so that they will want to visit again and again, just to take it all in.

Find your adventure at dekalbcvb.org.

No matter where you go in Ottawa, Ill., you’ll be surrounded by history.

Situated where the Illinois River and Fox River meet 80 miles southwest of Chicago, the city is often described by its leaders as being “in the middle of everywhere.” This is true, both in the sense of its proximity to a variety of natural and cultural destinations, as well as its place in America’s storied past. Its closeness to two major rivers, as well as the Illinois and Michigan Canal, established Ottawa as a transportation hub, shaping the city into the historical Illinois touchstone it is today.

“We are so rich in history,” says Donna Reynolds, administrative assistant with the Ottawa Visitors Bureau. “I’ve lived here my whole life, and I’m still finding things I didn’t know.”

Pedestrians can pick up a copy of the Old Town Heritage Tour book at the visitor’s center, in downtown Ottawa, and take a walking tour around the city’s most well-known historic landmarks. Washington Square, site of the first debate between Stephen Douglas and Abraham Lincoln, is one of the first stops. Directly north of Washington Square sits the Reddick Mansion, former home of William Reddick, a mogul, merchant, sheriff, senator and philanthropist who left a major portion of his land to Ottawa after his death. History buffs can tour the mansion and stand on its steps.

The City of Ottawa commissioned 10 murals depicting historic events from the city’s past. These include the Lincoln-Douglas Debates and famous former residents like Union General W.H.L Wallace and Bob McGrath of “Sesame Street.” Tours of the murals can be arranged through the Ottawa Visitors’ Center.

One of the founders of the Boy Scouts of America, W.D Boyce, made his home in Ottawa and is buried in the Ottawa Avenue Cemetery. Visitors can learn more about Boyce and his contributions to Scouting at the Ottawa Historical & Scouting Museum.

As much as Ottawa is steeped in history, there are plenty of places where history and the modern world collide. The city boasts 15 parks, with everything from baseball diamonds and bike trails to hiking trails, disc golf and boat launches. The Buffalo Rock State Park features an enclosure with three majestic bison in their natural habitat. A short drive north takes visitors to the Dayton Bluffs Preserve. While most of this new preserve’s amenities are still being built, the area boasts hundreds of acres of open prairie, lush woodlands and sacred American Indian burial mounds, all located along the Fox River.

All of these activities are sure to work up an appetite. Luckily, Ottawa’s restaurant scene is up to the task. There are several locally owned dining spots covering the gambit from sushi to farm-to-table to fine dining and everything in between.

“We have a plethora of every cuisine you can think of,” says Reynolds.

Since the city’s incorporation in 1853, Ottawa has always found itself “in the middle of everywhere.” And these days, it’s still right where you want to be.