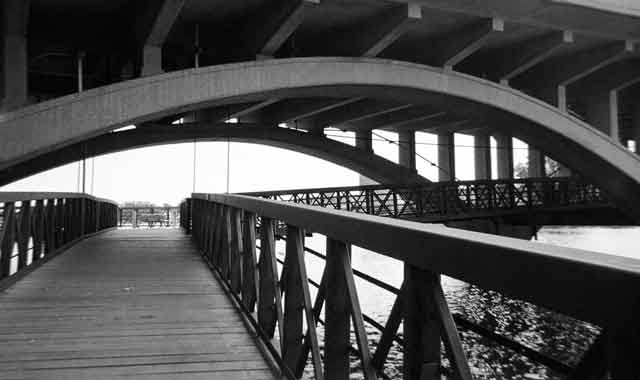 Proving that science can be fun and hands-on, the Discovery Center Museum has been a hit going on four decades. From humble beginnings in a post office basement to a nationally recognized award-winner, this museum has made a hallmark of learning while having fun.

When the Discovery Center Museum first opened in 1981 it was a far cry from what it is now.

It was housed in Rockford’s old post office building with just 20 exhibits. It wasn’t open to the public, but it was available for field trips from surrounding schools. In fact, around 2,000 students visited that first year, as they were welcomed and guided through the museum by volunteers.

To say the museum has grown and evolved in 40 years is an understatement. Those 20 exhibits have grown to more than 300 today. Each display is science-inspired, hands-on and geared toward kids of all ages.

The number of visitors has grown as well. In 2019, the museum served almost 275,000 people from across the country and around the world.

Boasting two floors of fun and 23,000 square feet of exhibit space, with another 18,000 square feet dedicated to a multi-level outdoor science park, today’s Discovery Center, 711 N. Main St., couldn’t possibly fit in its old home. And it’s still growing, thanks to the museum’s workshop where most of its exhibits are designed, built and maintained.

The Discovery Center has also earned a staggering amount of acclaim. TripAdvisor, the popular travel website, has awarded the museum multiple Traveler’s Choice awards and has placed the museum in its Hall of Fame, due to its many positive reviews. Publications like USA Today, Forbes, Child Magazine, Family Vacation Critic, Family Fun Magazine and Reader’s Digest have all listed Discovery Center as one of the top children’s museums in the nation.

It’s a lot to take in when you consider where it all started.

Getting Off the Ground

There is one constant through the entirety of Discovery Center’s evolution: Executive Director Sarah Wolf.
“If I had known, when this was getting started, where it was going to end up, I probably would have chickened out,” she says with a laugh.

Fortunately for the Rockford region, she didn’t.

Wolf was a member of Junior League of Rockford, which, in partnership with the Rockford Area Arts Council, decided to create a hands-on learning space dedicated to physical science. She served on the committee charged with making it happen, taking the helm as the committee’s director in its second year.

For research, the group visited similar museums like Exploritorium, in San Francisco. It was during a trip to the Magic House, a children’s museum in St. Louis, that Wolf became truly inspired.

“We thought we were going over for a magic show,” she says of that fateful trip. “When I saw the Magic House, I thought, ‘This is it. This is what we’re thinking about.’”

Once the Discovery Center got off the ground, it wasn’t long before curious parents of visiting schoolchildren wanted to see it for themselves. The museum opened to the public in its second year. By the third year, attendance had almost doubled to 11,750. By its fifth year, it almost doubled again, and by then Wolf had been appointed the museum’s director.

It wasn’t long before the Discovery Center needed a new home. A decision to host a dinosaur exhibit in the National Guard Armory, a stone’s throw from its current location, turned out to be a pivotal moment.
“Around 80,000 people came that summer,” Wolf says. “I was forever having to explain what Discovery Center was until we did the dinosaurs. Then, I could say, ‘We’re the group that did the dinosaur exhibit.’ That put our name on the map.”

That attention, and Wolf’s persistence, led to a $300,000 grant from the Build Illinois program, funds that could be used to find a new home.

Since those early days, the Discovery Center has become much more than just a tourist destination. Now a vital pillar to the greater Rockford area, it is an important hub for students, teachers and citizen scientists.

“For a city our size, to have a museum that has such a national reputation is pretty incredible,” says Ann Marie Walker, marketing director. “We’ve been very fortunate over the years to have so many phenomenal staff who understand what it takes to be successful in an informal science setting.”

Unlike other museums, nothing in the Discovery Center is under glass or behind a rope. Everything is designed and created specifically to be played with while teaching core science, technology, engineering and math (STEM) concepts.

“The way that children learn is through play,” Walker says. “When you’re playing with your child, it’s not just about having fun. There’s learning going on. There are neurons firing. Connections are being made.”

In addition to hosting tens of thousands of visitors per year, the Discovery Center also offers a wide range of classes for school groups of all ages. Students can explore the exhibits and learn in a classroom setting with the museum’s small, but mighty, education team.

“Our STEM labs offer more-focused and more-structured teaching about a particular topic,” Walker says. “There are lectures involved, but there are also hands-on things for them to do.”

“We have a fairly sizable number of home-school families in the region,” Walker says. “Sometimes, there are topics where they don’t have access to materials they might need, or there are certain safety issues that make parents hesitant to do a project at home.”

By covering less home-friendly topics like dissections and chemistry demonstrations, the staff can complement the lesson plans of students learning at home, while going that extra mile to provide a quality educational experience.

For toddlers and preschoolers, the Discovery Center’s Tot Spot classes offer a unique opportunity for parents to meet up and interact with their children, and each other, with a focus on teaching social interaction and basic concepts like turn-taking and sharing with a heavy emphasis on play. This helps parents understand just how important play is in a child’s development.

“We love parent interaction,” Walker says. “It’s incredibly important to spend time with your child and interact with your child. We really try to talk about that in our classes and provide opportunities for it to happen.”

For elementary and middle school teachers, Discovery Center provides 40 hours of STEM training during the summer months, giving teachers the opportunity to build their confidence and provide strategies for teaching science in their own classroom. And, if you can’t come to the museum, the museum can come to you with hands-on classes, science carts, a portable planetarium and assembly programs.

Spreading The Word of Science

When the pandemic hit, Discovery Center, like almost all museums in the country, was forced to close its doors for six months. The experience led to innovation and a pivot from the real world to the virtual. Now, thanks to the hard work of the museum’s creative education staff, the museum offers a virtual outreach program with a variety of courses that can be beamed to groups and classrooms around the world. It’s all part of the Discovery Center’s mission to spread the word of science far and wide.

Now that the world is starting to open again, Discovery Center’s team is looking forward to hosting events.
Recently wrapped gatherings like Spooky Science, the museum’s not-so-scary Halloween event, and Smashing Pumpkins, where used-up jack-o-lanterns are launched through the museum parking lot with a trebuchet, have been a tradition for years. Each fall, the museum hosts a Bubble Festival, bringing in a live bubble performer to wow audiences of all ages. In the summer months, the museum hosts Family Fridays, where visitors can explore wizards’ castles, battle for control of the galaxy, or dress as superheroes or pirates, depending on that week’s theme.

All this programming can be daunting for a nonprofit organization like Discovery Center, but the lessons learned in those early days have served the museum well. The staff, under Wolf’s leadership, understand it’s not just about the money coming in.

“We also recognize we need to be good stewards of any money we receive,” Walker says.

A great deal of that stewardship involves teaming up with other community-minded organizations. The museum has a long history of partnership with the Rockford Public Schools, providing valuable programs like the Head Start/Early Childhood Family Engagement Program, which supports school readiness and direct services like facilitated playgroups, classroom visits, family nights and subsidized field trips.

The Discovery Center also participates in LEAP into Science, a nationwide program that combines science programming with children’s books. Through LEAP into Science, the museum has provided books, project supplies and after-school staff training for eight local elementary schools.

After-school programming is enhanced by visits and demonstrations by museum staff. Additionally, students at Lathrop and Conklin elementary schools’ programs receive a free membership to the museum. Summer school and summer camp programs are available for District 205 students to help them build core skills in math and literacy.

The museum also provides family fun nights to participating schools, giving students and their families an opportunity to play and explore the museum after-hours. The museum has also teamed up with a local chapter of the National Society of Black Engineers to create STEM on the Rock, a series of hands-on sessions designed to spark interest, develop confidence and inspire students to consider science-related careers.

All of this community service, combined with programming and exhibits, has made the Discovery Center an asset, not only in the community-at-large, but also in the eyes of the many tech and aerospace companies doing business in Rockford.

“We’ve gotten great partnerships over the years with Collins Aerospace, Thermo Fisher and Woodward, which are some of the biggest employers in town,” Walker says. “They see our value and they want an educated workforce. They need employees, engineers and scientists. They see us as a place where we start that curiosity and that love of learning.”

The museum is also recognized for the quality of life it brings to the city of Rockford.

“We’re used in the recruitment materials for area employers,” Walker says. “If potential employees are considering moving to Rockford and having a family, Discovery Center is a great resource.”

Not so long ago, science saved the world. In the midst of a pandemic, scientists from across the planet came together to create a vaccine. It’s not a stretch to wonder if those scientists were inspired by a place like the Discovery Center.

“The core of our mission is to inspire future innovators and scientists,” Walker says. “Our country needs more innovators and creators. I think there’s a real calling for us to be a place where kids can experiment, innovate and create.”

It’s hard to imagine just what the next 40 years will look like, but Wolf is confident about what’s to come.
No matter what the future holds, the one thing that will remain the same is the museum’s commitment to making science accessible to everyone.

“We’re always trying to meet the needs of our own community,” Wolf says. “If you lose sight of that, then you’ve lost a big reason to be.”