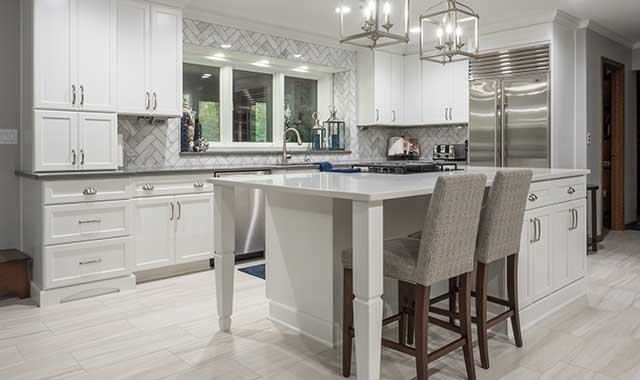 A fireplace can instantly turn a house into a home and, with a fuel efficient gas fireplace, you can stay cozy in front of a crackling fire without the back-breaking wood chopping.

Snuggling up in front of a cozy fire is one of the true joys of Midwestern winters. While the crackle and aroma of wood-burning stoves and fireplaces create a relaxing environment, having to chop wood, light fires and clean up ashes can be exhausting.

“We still do some wood-burning units, but the majority of people want gas,” says Kevin Obee, general manager of Benson Stone, in Rockford. “Gas units have come a long way in the past 20 years to the point where they look very real.”

Most modern units can be vented through an exterior wall or be retrofitted into existing fireplace openings, making them extremely versatile.

“It’s easy to add one to a pre-existing home since the venting doesn’t have to go way up through the roof,” notes Brad Vander Hayden, president of Advanced Chimney Systems, in Rockford.

There are so many shapes, sizes, features and styles that homeowners can be overwhelmed by the options. That’s why companies like Advanced Chimney Systems and Benson Stone have experts on hand to help customers select not only the look they want but the type of system that best fits their budget and lifestyle.

“We have designers on staff who can help you narrow it down and design a fireplace really quickly,” Obee adds. “We can do the whole turnkey installation, or we can put the fireplace in and let do-it-yourselfers put on the stone, brick or panel stones, which are really easy to do.”

Along with deciding what your new hearth will look like and where to place it, your most important choice is whether you want an open-vent fireplace, a direct-vent insert, gas logs or an electric fireplace.

For starters, the terminology is important to understand. A new fireplace is a brand-new unit where one has never existed; inserts are sealed systems that pull air from outside (instead of your room) and send exhaust directly outdoors. Gas logs with glowing “embers” can be found in both open-vent and direct-vent systems.

Each system has its pros and cons, depending on the customer’s needs and interests in things like efficiency, space and color.

All that most homeowners need to know about open-vent and direct-vent systems is pretty simple. While both types will exhaust fumes outdoors, open-vent systems – like traditional masonry fireplaces – draw in room air to feed the flames. This approach is less efficient than a sealed, direct-vent system that pulls air from outside your home.

For centuries, wood was the fuel of choice for fireplaces. And for some people it still is.

“We have high-efficiency wood fireplaces and wood inserts for existing fireplaces that transition a fireplace into more of a heater,” Vander Hayden says.

“They’re very popular,” he adds, “because with your traditional fireplace, most of the heat goes right up the chimney, but with wood or gas inserts, you’ll get a lot of heat back. Most have fans to blow the heat into the room, and they have sealed combustion so you’re not using room air for combustion.”

Gas logs can be found in both open-vent fireplaces and direct-vent inserts.

Vander Hayden says newer gas logs radiate more heat than those sold a decade or two ago. “Even though they’re pulling heat out of the room in a traditional masonry fireplace, they’re reflecting heat into the room.”

Obee estimates that, given current natural gas prices, running 80,000BTU gas logs in an open-vent fireplace adds about 30 cents per hour to your gas bill.

“They’re roughly 0% efficient, because a typical masonry fireplace is gaining as much heat as it’s losing, but you’re only paying a dollar every three hours to enjoy a fire,” he says. “You turn it off, set your damper and it’s no big deal. You’re not cooling your house down, but you’re warming up the room you’re sitting in while you enjoy it.”

On the other hand, Obee says direct-vent gas inserts in the 25,000-40,000BTU range are between 80-85% efficient. Using his own fireplace as an example, he says he usually runs it on the high setting, and it doesn’t cost a penny to run.

“That’s because I’m trading the gas in the furnace for the gas in the fireplace that’s heating the family room where we’re watching TV,” Obee says. The fireplace essentially serves as a zone space heater, and it reduces how long the furnace runs. In the event of a power outage, the fireplace will continue heating when your furnace won’t. “And it actually saves me money every single time I use it, versus using my furnace to heat the same space.”

When it comes to appearances, there are some small differences between gas and traditional wood models. “Gas logs with a sand pan burner will have a rich, yellow-red flame, but it does create a little soot – which is fine with an open-vent fireplace,” Vander Hayden says, “With direct-vent fireplaces, some gas logs might start out blue and turn a nice yellow after they heat up, but direct-vent fireplaces will not create soot.”

When installing a gas line or proper venting would be impractical or expensive, some homeowners opt instead for electric fireplaces.

“Electric fireplaces have come a long way in the past few years,” Obee says. “They’re much better looking than they used to be, but they put out almost no heat. They’re more for ambiance.”

However, Obee notes that a new trend in electric fireplaces is a water vapor system. “It’s actually mist that looks like flame coming up when orange and yellow lights are on it,” he says. That water can add a bit of humidity to a room, but no heat. These models offer only the cozy feeling of a traditional fire and tend to be more popular in warmer climates.

If you want to build a new fireplace where none has been before, plan to spend at least $6,000 to $10,000, and possibly double that for some direct-vent units. There are a lot of variables, from the materials you choose to the proximity of your gas lines (if you opt for gas) or if you’re having a full chimney chase built.

If you want to convert an existing masonry fireplace to gas logs and need to run a gas line, Vander Hayden says it might cost around $2,000, depending on the type of gas logs you choose and whether you opt for a remote control.

Installing a direct-vent insert into an existing fireplace could cost two to three times as much, if not more.

“It really depends on the manufacturer, the size and front, and how easy or difficult the installation would be,” Vander Hayden says.

Obee concurs, saying the average cost of installing a direct-vent system into an existing masonry fireplace could be between $5,000 and $8,000.

It’s an investment that will pay off over time by reducing your home’s heating costs and increasing the value of your home.

Whether you’re looking for pure ambience or a little extra heat to get you through those cold winter months, the options abound. But the bigger question remains: Why wouldn’t you want a little extra coziness?