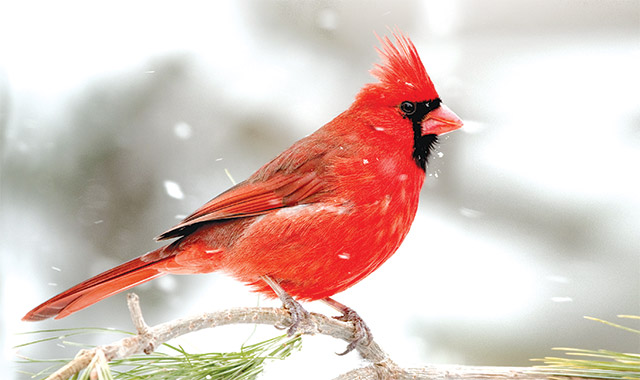 It Really Is a Winter Wonderland

How many teenagers would wake up at just to hit the trails at 4 a.m.? For this talented young photographer, the thrill of the hunt and the discovery of nature fuel a growing passion for her art.

Most teenagers are sound asleep at 4 a.m., trying to get as much shuteye as they can.

Kayla Lindquist is not like most teenagers. At just 18 years old, she has an eye for nature photography that’s possessed only by seasoned veterans.

And those seasoned veterans will tell you some of the best photos of wildlife are taken very first thing in the morning.

That’s where many of Lindquist’s adventures begin. On one recent morning, Lindquist ventured out to Cedar Cliff Forest Preserve, north of Stillman Valley, Ill., and photographed a Dickcissel prairie bird singing. It was a cool morning, and she captured the bird’s breath as its song rang through the prairie.

“You won’t find many teenagers who are so passionate about photography that they’ll get up at 4 a.m. to be somewhere by 5 a.m. just to get a shot like that,” says Paul Lindquist, Kayla’s father. “During the pandemic last year and this year, we probably hiked 300 or 400 miles in the area forest preserves just looking for the right shot. There are days where we’ll hike 10 to 15 miles. Find a teenager who’s willing to hike like that just for a photo.”

Lindquist was hooked on nature photography at 13, the moment she started taking photos with a Samsung Galaxy phone.

Her first photo was of flowers and landscaping on the side of her house.

“My first thought was, ‘Wow, I just took a pretty picture,’” she says. “Then, I wanted to take a better one.”

What started innocuously has blossomed into a love and a passion for nature photography.

In five years, her talents have taken off, and she has her sights set on the next level. The Winnebago, Ill. resident, and recent Pecatonica High School graduate, is heading to Central College in Pella, Iowa, where surprisingly, she won’t be studying photography. Instead, she plans to study biology, so she can get a better understanding of the subjects she’ll one day shoot.

“I’ll take classes to help me get better at photography, but I’m not going to be completely focused on it,” Lindquist says. “If you know what you’re photographing and you know their behaviors, you’ll end up getting better photos.”

Her favorite subject matter is birds, because they’re very difficult subjects to shoot, she says. At the same time, capturing a bird at the right moment yields the most rewarding photos.

“That takes a lot of studying, because they don’t like people and they’re fast,” she says. “I’ve spent hours and hours and hours learning all of the species. I’ve gotten photos of more than 120 species of birds just in our area.”

Lindquist knows so much about birds that she’s able to distinguish them just by their songs.

“That took a lot of listening in nature,” she says with a laugh.

Lindquist has traveled all over the country for her photos, but the majority of her work has been done right here at home. There are more than 40 forest preserves in Winnebago County, and Kayla and her parents visited nearly all of them in the past year alone. They also visit the Byron [Ill.] Forest Preserve District and several preserves in Wisconsin.

“Some of my favorite places to shoot are right here, and my favorite this summer is the Cedar Cliff Forest Preserve because there are so many birds and flowers there,” she says.

Another favorite hangout is the Pecatonica Wetlands Forest Preserve, in Pecatonica, Ill., where Lindquist has spent more than 100 hours shooting nature and wildlife.

If it’s a cloudy day, Lindquist prefers to shoot in a forest setting, because it provides the best backdrop. If it’s a bright and sunny day, she prefers to shoot early in the morning or later in the day toward sunset. She’s always trying the best lighting situations, when white values are toned down and other colors are brought out.

“The lighting is very important,” she says. “You’d think during the day you’d have all the lighting you need because it’s so bright, but everything becomes very reflective and hard to see, so the lighting has to be just right.”

Currently, Lindquist uses a Sony Alpha A9 full-frame camera with a Sony FE 200-600mm lens. Paired together, they create high-resolution photos at a rate of 20 frames per second, which is ideal for photographing birds in flight. She also uses a Nikon Coolpix P1000 camera, which she says is perfect for capturing photos at a distance.

“The P1000 has 125 times optical zoom, which is the equivalent of a 3,000-millimeter lens,” she says. “It’s very good for birding, because I can shoot them from far away without having to bother them.”

Occasionally, she’ll also take videos with the P1000. One went viral on TikTok, with 1.2 million views. The video starts with a man standing atop Half Dome in California’s Yosemite National Park. The video looks close-up, but as it zooms out, the viewer finds out the guy is actually more than five miles away.

“You can use this camera to zoom in on the moon and see the craters on the moon in detail,” Lindquist says.
As she’s discovered, there’s both an art and a science to photography. It’s important to have patience and lots of practice.

Studying others has helped Lindquist grow her eye for detail and her knack for subject placement.

One of Lindquist’s favorite inspirations is Bob Ross, an iconic painter. She fell in love with his work at a young age and even modeled some of her work after his.

“I learned how to put a composition together because if you watch him paint, he knows where our eyes go when we see a picture,” she says.

And, she adds, the late artist knew how to keep the viewer’s eyes on the picture.

“A lot of mistakes people make involve having a bird look off the screen and a person look off the screen, so then your eyes go where their eyes go,” she says. “Sometimes, you go into a picture and you’re out of it and dismiss the whole picture because of where the subjects are placed.”

“He didn’t even have a guide,” she says. “He just knew from his mind where to put everything, and I started figuring out why he was doing certain things. That started helping my photography. I just kept watching him, and his show is now the default channel on my TV. So, whenever I turn it on, Bob Ross is there.”

One of Ross’ methods was to add layers to his paintings, which gave them depth. So, when Lindquist grabs her nature shots, she looks for views that have a touch of depth, like a little bit of haze, in the background.

“This is the kind of stuff that she’s looking for when she takes her photos, but the average person wouldn’t even know to look for that,” father Paul says.

Lindquist is an active member of the Rockford Photo Club, and the Winnebago County Forest Preserves have displayed her work on their website, in their quarterly newsletter and in their 2020 calendars. 815 Outside, an initiative aimed at getting more people outside, has posted several of Lindquist’s photos on its website.

She’s also created and continually updates her own website, kaylalindquistphotography.com, where she shares all of her favorite photos and provides educational information.

And to think it all started with a couple of flowers on her smartphone.

“It’s like when you make your first basketball shot or you hit your first home run,” she says. “Once you do that, your mind kind of gets semi-addicted to doing that thing because you want to continue outdoing yourself. That’s what happened to me when I took that first photo.”