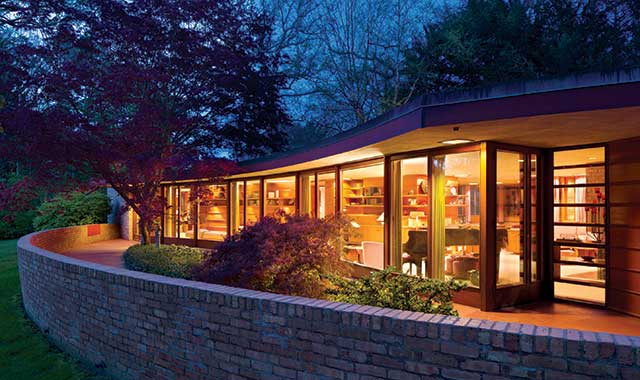 In 1939, Cheeseman Construction of Freeport built a band shell for approximately $8,000. Originally dubbed the Memorial Band Shell, it was built for music concerts and pageants.

“It was presented to the Freeport Park District in 1940 by Mr. and Mrs. Robert F. Koenig in memory of Wilbur Thomas Rawleigh’s son, who died during service in World War I, and all Stephenson County men who died in defense of the flag,” says Sharon Weldon, executive director at the Stephenson County Historical Society.

The amphitheater was used for the first time on July 4, 1940, as the Freeport Concert Band, directed by Karl Kubitz, celebrated our nation’s independence.

The amphitheater has since been used for musical performances, weddings, special events, dance recitals and fitness classes. Every summer, the park district hosts Movies in the Park and the Freeport Concert Band presents Music Under the Stars.

The amphitheater earned the Outstanding Facility Renovation award from the Illinois Parks and Recreation Association in 2000, recognizing the quality of structural repairs made to the proscenium arch and main stage.

The opening volleys of the Black Hawk War began around what’s now Stillman Valley, Ill. Regarded by historians as the Battle at Stillman’s Run, the Battle of Sycamore Creek or the Battle of Old Man’s Creek, the skirmish happened on May 14, 1832, when 275 Illinois soldiers led by Maj. Isaiah Stillman clashed with Sauk warriors sent by Black Hawk, a Sauk chieftain who was camped nearby with a ragtag group of Sauk, Fox, Kickapoo and Ho-Chunk peoples.

Illinois Gov. John Reynolds had called a volunteer militia to the area to defend settlers against native tribes as Black Hawk moved east of the Mississippi in an effort to reclaim tribal lands. A small group of soldiers, sent from a fort near what’s now Dixon, Ill., was camped near Old Man’s Creek when Indian scouts were seen nearby. Assuming an imminent raid, Stillman ordered troops to open fire.

In the ensuing fighting and the militia’s panicked retreat, 12 soldiers were killed. An estimated three to five Indians were killed. Afterward, soldiers from the Dixon fort were called in to help bury the dead; among their ranks was a 23-year-old militia captain named Abraham Lincoln, who would be President some 30 years later.

Today, there’s a memorial at the site, commemorating those who died. The public park is listed on the National Register of Historic Places.

Today it’s pretty difficult to imagine a United States without cheese factories, but there were no such things until the 1830s, when European immigrants commercialized what had been a household task. Oddly enough, Swiss immigrants in New Glarus, Wis., originally made their cheese with milk transported from Ohio.

That’s because Wisconsin farmers were focused on growing wheat, not raising cows, until much later in the 1800s, after wheat crops had depleted the soil and wheat farming moved west. Local farmers soon realized just how well-suited their landscape was to raising dairy cows. Once railroads arrived, the making and shipping of cheddar (and other) cheeses transformed the local economy, giving Wisconsin a “gold rush” of its own kind.
Learn these and other cheese facts when you visit this national museum for a $5 admission price. View a 15-minute video that explains the ancient art of cheesemaking, with past and present methods explained; visit Imobersteg Farmstead Cheese Factory, on the property; learn the story of local cheesemaking through the late 1800s and early 1900s; and receive a goodie bag that includes a cheese dip spreader. The Milk House Gift Shop sells cheese-related mementos, books and cards, and nearby stores sell quality Wisconsin cheeses, sausages and other local goods.

The center re-opens for the season on May 1. Updates can be found on its website at nationalhistoriccheesemakingcenter.org.