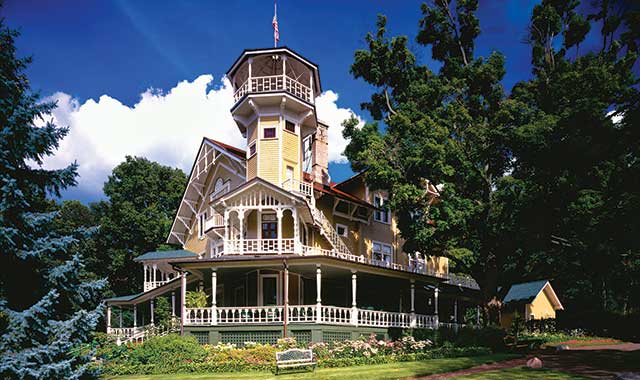 It’s hard to know when news will break, and when it does, you can bet 23 News’ Mike Garrigan will be ready. Get to know this local evening news anchor and find out why he enjoys bringing Rockford the latest updates each night.

Feb. 14, 2008 started out as just a quiet and slow news day for Mike Garrigan, an evening news anchor with WIFR-23, Rockford’s CBS-affiliated station.

He spent part of his Valentine’s Day in a meeting leading up to his afternoon shift when someone asked what he was covering that day.

“I said nothing,” he recalls. “There was nothing really going on. It was kind of a weird, boring day at first.”

Everything changed an hour later. Chatter came across a nearby police scanner about a shooting at Northern Illinois University, in DeKalb.

“I just remember our news director saying we’re going to do a cut-in and they told me to just let people know what we knew so far,” says Garrigan. “So, I grabbed one sheet of paper and I was on the air around 3 p.m. I was on until 6:40 p.m. as a solo anchor, with just one sheet of paper and no prompters. That gives you an idea of what can change in a day when you’re doing the news.”

It’s that type of adrenaline-filled rush that 50-year-old Garrigan lives for. He’s the current evening news anchor on WIFR’s 5, 6 and 10 p.m. newscasts. His co-anchor, Shannon Kelly, has sat by his side for nearly four years.

“She’s the most dependable, committed, competent person that I’ve worked with, and for someone who’s just 26 years old, that’s saying something,” Garrigan says about his co-anchor. “Her future is very bright, but her present is pretty damn good, too. We wouldn’t be doing what we’re doing without her.”

And Garrigan probably wouldn’t be sharing the daily news with Rockford if it weren’t for his wife of 27 years, Kirsten, whom he met when they were both students at the University of Wisconsin-Whitewater.

While at UW-Whitewater, he was a play-by-play announcer for the college’s sporting events, and he had a sports program called “On the Ball.” He also reported for the campus newspaper.

“I got a 4.0 GPA my first semester, but I was more prepared for my career when I got a 3.2 GPA because I was working for the campus television station, the newspaper and covering all these events. That’s where I got the practical experience, even if it meant not studying as much for a test.”

After he graduated in 1992, he began a broadcasting career in sports. He bounced around to several stations before coming to WIFR in 2003. He covered sports for four more years before making the switch to his current role as an anchor in 2008.

“I felt like I reached my salary cap in sports, because you can only make so much money,” he says. “I always was interested in the news.”

His first assignment as an anchor was traveling to Springfield, Ill., and covering then-Sen. Barack Obama’s announcement that he was running for president.

Garrigan has been in the news business ever since and says he loves it just as much now as he did in the beginning.

“This is my art, so it’s great to find out something and tell it in a creative way,” Garrigan says. “I’ve always been a guy who sought information that people cared about, and that’s something I’ve always craved.”

One of the hardest parts of the job, Garrigan says, is trying to relay a news story without his emotions getting in the way. The gunman involved in the NIU shooting entered a lecture hall and shot 22 people, killing five. The gunman then took his own life.

“You really need blinders on as far as emotions at that point, and just give people what they need to know,” he says. “As soon as I was off the air, all I did was take this huge sigh and then I started to cry. You have to be that stable person at a time of tragedy. When the time is right, you can just let it go, and that’s what I did.”

Unlike the traditional nine-to-five sort of job, this one isn’t always beholden to the punch of a time clock. Garrigan is scheduled to work weekdays from 2 until 10:30 p.m., but news can happen at any time, and there’ve been plenty of instances where his schedule has turned completely upside down.

“We have scheduled shifts, but if something happens, I might be coming in at 10:30 a.m.,” Garrigan says. “You just don’t look at the clock at 5 p.m. and then go punch out, because who knows what can happen?”

When there was a deadly shooting last year at Don Carter Lanes in Rockford, Garrigan was called into work on a Sunday, one of his scheduled days off.

“You get some extra time off at some point, but that’s just the nature of the beast,” he says.

Garrigan has been in the news reporting world for more than 25 years, and he’s yet to have a perfect day.

It’s one of the many things that keeps him coming back for more.

When he does have down time, he’s very much into sports, but he also enjoys spending time with his wife and four children: Keenan, 24, Kiah, 21, Larson, 18, and Braylon, 15.

“I still have sports in my blood, so I love watching sports, and I love looking up sports trivia,” he says. “I also love to travel. If I’m going to St. Louis, I like taking the back roads and imagining what life is like in a small town and maybe stop at a cafe to get a better feel for it.”

About three years ago, Garrigan’s doctor discovered a lump on his left kidney, which ended up being cancerous. Doctors caught the cancer in its early stages, and the kidney was removed.

“I’ve had no sign of cancer ever since,” he says.

No two days are ever the same for Garrigan. As a loving husband, father and anchor of a popular evening telecast, he lives each day to the fullest.

“I’m very happy here at WIFR, and I can see myself riding it out here and doing a lot of traveling once I retire,” he says. “I’m so content that I don’t know if I have a big goal for the future, because I’m living it. Rockford is our home and I foresee it being our home for a long time.”