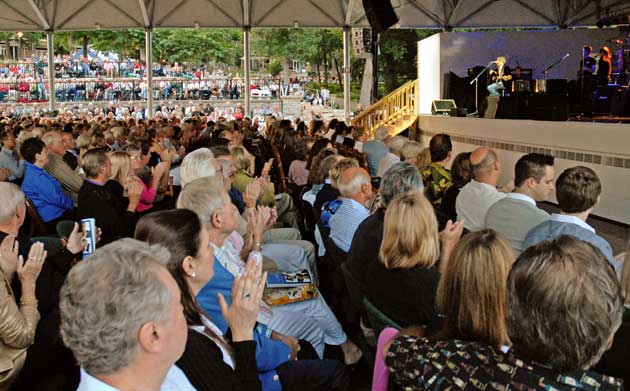 Music by the Lake: Eleven Seasons Strong, and Still Growing

Ever since they met in the 1980s, Nick Sinnaeve and Nicky Bertolino have been making music together as “The Stevee Nix.” Now after a hiatus due to COVID-19, the band is back and ready to rock.

For the better part of 35 years, Nick Sinnaeve and Nicky Bertolino have talked nearly every day. The frontmen for The Stevee Nix, a local band that plays mostly bars and private events in the area, have been rocking the local music scene since before the likes of Taylor Swift and Justin Bieber were even born.

In August, The Stevee Nix got back together after a six-month hiatus due to the COVID-19 pandemic to start rehearsing in anticipation of finally getting back on stage this fall.

Without question, it’s been the toughest year of their long musical career.

“To me, without music there is no life,” says Bertolino, the band’s vocalist. “This year has taught me just how important the relationships are that you form in a band. To go that long without hanging out, telling stories – it kind of wears on you. I compare it to an athlete who retires and misses the camaraderie. I miss my brothers in the band. You look forward to getting together to practice, to share ideas and talk about family. It’s like a second family.”

The pair met in the mid-1980s when they joined the band ICU, a name which came from the phrase I-see-you and made popular by the likes of mega acts U2 and INXs. Sinnaeve, who was 15 at the time, was the first to join. A guitarist, he started his career young; his first live performance was at 13, when he played in front of friends and family at his sister’s high school graduation party.

Bertolino, 21 at the time, was hired for his singing chops. He got his start by trying out for the choir at East High School during his sophomore year. He worked hard and made tenor in time for his senior year. ICU hired Bertolino in time for an upcoming show at the Belvidere Park Pool. “I had to learn 30 songs in two weeks,” he says.

In the late 1980s, ICU was one of the hottest bands in the area. In 1988, they released their first EP (extended play) record titled “It’s About Time,” which sold out of 750 copies within a year. The four-song track included “Time and Time Again,” a song that reached the top spot on WZOK’s Top Ten at Ten, a nightly show featuring songs requested by listeners. Their biggest gig was opening for rapper Gerardo, (think “Rico Suave”) in front of 5,000 screaming teenage girls at the Rockford MetroCentre (now BMO Harris Bank Center).

ICU played local bars like Rush St., Prairie Moon, Cubby’s North and East, and Endless Nights, as well as area festivals and numerous bars and colleges in Wisconsin and Illinois. The band had big dreams beyond Rockford. “We were on the cusp,” says Sinnaeve, who, along with Bertolino met with an entertainment lawyer in downtown Chicago, in hopes of reaching a record deal. But reality quickly smacked the pair squarely in the face.

“We walked in all high and mighty, but it was a letdown to hear the process,” Bertolino says. “I didn’t think we were in the right mind or right point in our life.”

That’s when they decided to return home and be content with being one of Rockford’s best bands. “We were going to play covers with our own beat, extended play, sing alongs, you name it. We were going to try to find a different, cooler version and wind people up,” says Bertolino. “We make the originals sound different like they are our own songs.”

Eventually the band ran out of gas and first broke up in 1993. “We were tired,” says Sinnaeve. “We were playing three or four nights a week. It was nonstop. Some of us were in college and some of us had fulltime jobs. Nicky was doing musicals at Starlight Theatre. We needed a break.” ICU reunited and played a few more years before pulling the plug for good.

Fast forward to 2005. Steve Shannon, morning host on 97 ZOK, approached Sinnaeve and Bertolino about starting a new band with himself and another Steve, Steve Muntz. They agreed and the two Steves and two Nicks played their first show with no band name. “We needed something catchy,” says Bertolino.

WZOK held a contest and the winner was The Stevee Nix, named after the members of the group and not after the singer for the legendary Fleetwood Mac singer, Stevie Nicks, which has caused plenty of confusion over the years. Even bars misspell The Stevee Nix on the marquee. “People think we’re a Stevie Nicks tribute band,” says Bertolino, who did dress up as the Fleetwood Mac singer one Halloween. “We’ve never played one of her songs. We were just two Steves and two Nicks.”

The Stevee Nix band has been around for 15 years with different members. When Shannon and Muntz left, the band was faced with a decision – do they change the name? The answer was no. They had already developed quite a local following. The current lineup includes Sinnaeve, Bertolino, drummer Kenny Goldman, guitarist Al Altamore, and bassist Dan Resenbeck, who was once a member of ICU.

These days, The Stevee Nix plays about two or three times a month and all shows are within 30 miles of the Rockford area. It’s a schedule that works for everyone in the band, says Bertolino, who owns a mobile auto glass business. For 25 years, Sinnaeve has worked for Shutterfly, managing an operations plant that involves some travel.

While there may be fewer shows for The Stevee Nix, the fans are never shortchanged. Typical sets are three hours long, and include decades-old hits that ICU once played like “What I Like About You” and “Melt with You.”

“The songs we do aren’t challenging,” says Sinnaeve. “We’re playing strictly for the crowd. We love to see the smiling faces and people having a good time out there.”

Bertolino is now 54 and Sinnaeve is 51; his long-flowing mane of the ’80s now a distant memory. They have families, including grown children who now sing along in the audience at many of their shows. “I never thought I’d be rocking on stage at age 50 with a Les Paul strapped on my shoulder,” Sinnaeve says. “Sometimes it hurts when I wake up the next morning.”

Bertolino and Sinnaeve have no plans on walking away anytime soon; they take it one show at a time. They tease that they might end up playing background music one day at a supper club.

One thing will never stop, however, and that is their respect for one another.

“We love each other like brothers,” says Sinnaeve. “It’s been a traveling circus over the many years. Nicky and I have been the ring leaders with many different characters or performers with us. It’s been a great journey.”
“We’re kind of like Mick (Jagger) and Keith (Richards),” adds Bertolino. “If it becomes too much work, Nick and I will know when it’s time. But it’s been a hell of a ride.”