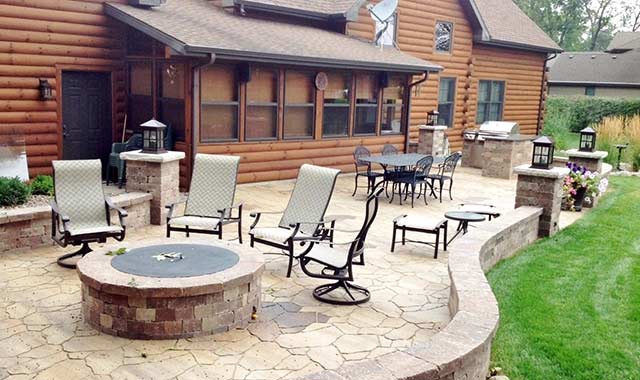 Meet a Rockford man who overcame personal challenges to become a beacon of light for others.

When Kevin Polky was growing up, he struggled with one fundamental question. “Who am I?”

In middle school, he was a shy teenager. He struggled making friends and getting to know other students.
Then, it all began to change.

He started lifting weights and underwent a growth spurt. By the time he reached high school, Polky became a decent wrestler and an honorable mention all-conference linebacker and fullback at Harlem, until a broken leg derailed his senior season.

“I went from invisible to visible,” he says. “In high school I became popular with other kids because of sports. I wasn’t a natural athlete but I could outwork people and other people noticed.”

But, where he really shined was on stage. Polky started body building when he was 15; and he was good. He won the Teenage Mr. Illinois competition two weeks after high school graduation; the next year he was crowned Teenage Mr. USA. While he never won another overall title, he did claim many top 5 finishes.

After seven years of competition, Polky retired from body building at age 22.

“I didn’t realize it at the time, but I stayed longer than I should have,” he says. “My football and wrestling careers were over, so I put all my chips into body building. When body building was over I was angry, lost, grieving. I had a huge fear that when I stopped competing, who would I be?”

So, Polky reinvented himself. In 1990, he graduated from Illinois State University with a degree in psychology. All that time and commitment he put into sports was now channeled into other directions. He put the work in. He studied hard. He took extra work shifts at a local mental health hospital and he went back to school, earning a master’s in social work from the University of Illinois. He went to work as a social worker, and a football and strength and conditioning coach at Harlem.

“I had the same mindset that I had in bodybuilding. The biggest thing I took from competing was a strong work ethic and passion,” says the bespectacled Polky, who years later remains an imposing figure thanks to a sleeve of tattoos, his chiseled physique and a ponytail of his long, graying mane.

Today, Polky is a successful business owner. For the past 18 years, he’s operated KP Counseling, Ltd., a full-service Rockford-based counseling center. He started with one other therapist but has grown to a staff just shy of 50, including therapists, a medical director, nurse practitioner and support staff.

“I wanted to be the best counselor I could be,” he says, “and I wanted to make a difference helping people. I didn’t plan on adding counselors in the beginning, but there was a demand in the community.” KP Counseling offers a range of services including individual, couple, family and group counseling for grief, trauma, addiction, anxiety, depression and other disorders. As executive director, Polky counsels clients two days a week and facilitates three men’s groups.

“I wanted to break the negative stigma around counseling when I opened KP. I am especially proud of my men’s work. I wrestled with the idea of how to market counseling without sounding too cheesy. I tested and tried different elements. That’s when I started doing more public speaking and becoming available for media interviews. I say yes to many things. You never know who I might reach with my message.”

One person he connected with was Masha Erofeeva, who spent the past several months as an intern at KP Counseling. But her first experience with Polky was more than a decade ago, when she was a 16-year-old client of Polky’s.

Erofeeva was a Russian immigrant who moved to Rockford, where she was bullied in school, struggled to speak English and experienced serious culture shock.

“I was an anxious teenager who was being dragged to therapy by her mom,” she says. “I wanted independence from my culture and family. I wanted to feel like I belonged. I was ready to hate the experience but Kevin was really present and able to meet me where I was at. It felt natural and organic. When I walked in to his office I felt at ease. I felt understood in a holistic way, but equally challenged and inspired at the same time to work on becoming the best person I could be.”

Polky describes his counseling style as straightforward. “We’re just talking, having a conversation,” he says. “I totally respect people who are willing to be vulnerable, willing to face their own fears and take that on. I love to hear stories, whether it’s a story of chemical imbalance, misperceptions, or trauma. It’s my job to meet people where they’re at in their journey. How can I be a beacon of light?”

Polky’s work is born out of his faith. It’s a conversation he shares openly and honestly with his therapists. “A lot of my concepts are influenced from my Christian spirituality,” he says. “We don’t fix people; we are a vessel for God to work through. It’s their journey. I’m just walking with them on the path.”

Not much rattles Polky at this point in his career. But, running homicide support groups for the state’s attorney’s office for the past 10 years has exposed him to unimaginable tales of horror. “I’ve left those meetings wanting to hug my kids,” he says.

Four years ago, Polky helped form a nonprofit called “Shatter Our Silence,” after three students from his son’s high school committed suicide. It was after the last funeral he decided to do something. Polky reached out to Xavier Whitford, who lost her own son to suicide, to start a rally. They thought it might be a one and done event, but more people expressed interest in having Polky speak to various groups. Now he works with area schools, hoping to get the message out to students.

“We focus on awareness of young adult suicide,” he says. “When we started four years ago, not everyone knew there was a problem. Now they do. How can we educate people and come up with solutions?”

A year ago, Polky started a podcast as part of his Four Corners Wellness business that includes coaching, executive consulting and professional and personal development trainings. Every week, Polky interviews guests ranging from former athletes to business owners to individuals battling mental illness. “It’s a chance to get to a deeper level of a story,” he says. “These are phenomenal people with phenomenal stories.”

Masha Erofeeva knows Polky as well as anyone. After being a client and a former intern, Erofeeva has come full circle in her journey. She has joined Polky’s staff as a full-time therapist.

“Kevin is genuine, innovative, open to experiences, and very sure of himself and what he has to offer to the world,” she says. “He practices what he preaches. He’s the real deal.”

Thirty years after his body building days ended and the approving crowds cheering his athletic prowess have stilled, Polky now has a higher purpose. He’s been married to wife, Diane, for 25 years. They have a son, Kalab, 23, and daughter Cierra, 21, who both show interest in their father’s work. And while his competitive days are a thing of the past, Polky still works out, stretches and meditates daily. He calls it practicing self-care.

So, who is Kevin Polky today?

“It’s hard to know, but it’s an ongoing process,” he says. “For me, I am someone who is spiritual and willing to make a difference for others. I love teaching and learning. I’m someone who is going to continue evolving, growing and finding balance in my life.”