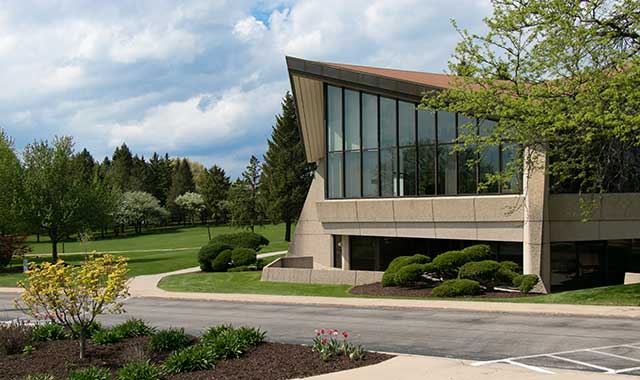 This church was formed in the midst of the Civil War by eight East Fresian immigrants (from a part of lowland Germany that adjoins Holland). The immigrants had been attending the Silver Creek Reformed Church of German Valley but wanted a church closer to home.

East Fresians thought of themselves as distinct from other Germans and sought a Reformed church affiliation rather than Catholic, Lutheran or Evangelical. These independent thinkers settled Ridott Township as the first East Fresian settlement in the U.S. In its earliest years, services were conducted in Dutch, then in German. English was adopted around the time of World War I, probably because German-Americans were often persecuted in those days.

This congregation’s pretty brick church building was erected 100 years ago, in 1919. A family donated the beautiful Himer’s pipe organ in 1925 that’s been well cared for and is still used today.

The church seeks to make a difference locally and across the world by helping to bring education, medical care, clean water and nutritious food to people who need it most. It shares the love of Christ by supporting mission trips, service projects, food drives, clothing and household item collections, and by hosting an appreciation dinner in the community.
The church is led by Pastor Lyle Zumdahl, a former farmer who grew up in this church, and his wife, Amy.

Services are Sundays at 9:30 a.m., with fellowship ahead of the service. Dress is casual.

When you sit in the pews of this church, you’re gazing at the same beautiful stained glass windows Ulysses S. Grant saw when he worshipped here regularly in 1860, just before the Civil War began. The church building we know today was new, having been dedicated in 1857. Grant didn’t yet know he’d lead the Union Army to victory and become the 18th U.S. president before the decade was gone.

Although the church building was new in 1857, the congregation was not. It had formed some three decades earlier, in 1829, during the nation’s first mineral rush. Galena’s population rivaled Chicago’s then, at about 10,000. As was so common in the 1800s, the congregation’s first frame church was destroyed by fire. A second one, made of brick, was too small by the 1850s.

Today the church has a choir and bell choir as part of its active music program.

Congregants are involved in a range of local good works to serve the hungry, sick and homeless. The youth group recently traveled to Montana to do mission work with the Blackfeet Nation. Social Justice conversations are held each Sunday after coffee hour, and the church contributes to the broader efforts of the UMC Committee on Relief, which recently responded to damage done by Hurricane Dorian in the Bahamas.

This church is a designated Reconciling Congregation, meaning it is committed to “being in loving Christian ministry with all people without prejudice, to truly have ‘open hearts, open minds, and open doors,’ to work toward the time when our congregation, our denomination, and our society live the all-inclusive love that our faith demands.”

The church is led by the Rev. Catiana McKay. Sunday services are at 10:30 a.m.