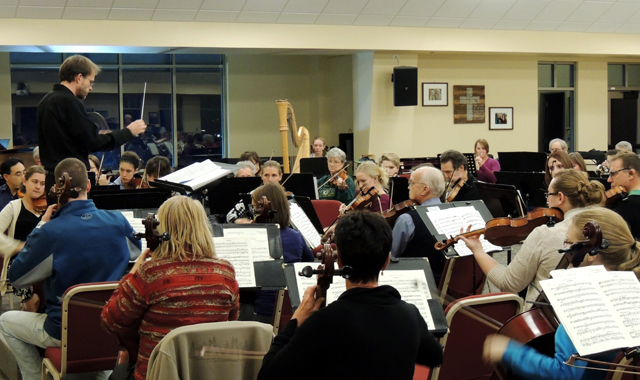 As one of the nation’s longest-running music clubs, the Mendelssohn Performing Arts Center has been a home for Rockford-area musicians and a community support in many ways.

After hosting a group of music-loving women in her home in 1884, prominent Rockfordian Clara Blanche Ellis Starr founded the Mendelssohn Club. Named after renowned German composer Felix Mendelssohn (1809-1847), the social club has since evolved into a venerable community organization dedicated to educating and entertaining the community through music.

Renamed the Mendelssohn Performing Arts Center (MPAC) in 2006, it is the oldest continuously operated musical organization of its kind in the United States, according to its administrative director, Matt Guschl. MPAC celebrates its 135th anniversary on Oct. 4, 2019.

“There are a couple of other community music organizations that were around before us – like the Schubert Club in Minneapolis, and another on the East Coast somewhere – that are a bit older, but they were inactive a few years. We’ve been in continuous operation since 1884,” he says.

In the early 1950s the club built a permanent home at 415 N. Church St. While that facility is still part of the MPAC campus, in 2005 the organization purchased the historic Emerson house at 420 N. Main St.; the main floor was converted into performance space and the second floor now houses the office of the Phantom Regiment Drum and Bugle Corps. In 2012, MPAC bought the former First Presbyterian Church building next door.

“We still have the original pews, which I think adds a community gathering feel to the concerts,” says Guschl, who holds a doctorate in musical arts in oboe performance. “We don’t have assigned seats; you come in and sit wherever you want.” The additional space allows MPAC to host activities for schools and community arts organizations.

“If it fits with our core concept of supporting the musical arts, we’re fully cooperative with other arts organizations,” says MPAC board member Wayne Hatwich. “The Rockford Symphony Orchestra uses our facilities to rehearse sometimes, too.”

Due to MPAC’s focus on music education, it frequently works with the Rockford Public School District. Last year it hosted the school district’s Real Men Sing event that encourages boys to join their school choirs. Guschl also looks for opportunities for MPAC’s guest performers and soloists to visit local schools.

“Part of our mission is education, so it’s exciting and important for us to be able to do that,” he says. Student tickets to all MPAC concerts are only $6.

“All of our concerts have an after party that everybody in the audience is invited to attend,” Guschl continues. “They get to meet the artists and talk with them, get an autograph, or ask them about their music. In a lot of other venues you have to be a major donor to get that kind of access to the soloist.”

Given the breadth of the center’s four annual concert series (see sidebar), there should be something for nearly every musical taste. The Mainstage series is a mix of guest artists and local collaborations. An upcoming performance Guschl is especially excited about is “Modern Dickinson,” where the poetry of Emily Dickinson is set to music performed by Grammy-winning musicians.

“We’re partnering with Rockford University on that,” Guschl says. “It’s going to be part of Rockford University’s Forum Series this year. They’ll do a lecture or demonstration on the way different composers set Dickinson’s poetry to music or were inspired by her poetry. They’ll use excerpts from their concert, but it will be more of an educational talk than just a straight concert.”

The Main Stage series also includes at least two local collaborative concerts. This season, those will be “A Shining Night of Barber,” and “The Ubiquitous Accordion.”

“The Charlotte’s Web series is sort of our world music series,” Guschl says, noting that MPAC has been home to the renowned Charlotte’s Web since 2012. “It’s an all-encompassing series that is not Western classical music. For example, one of the four concerts we have this year is Weep & Willow, which is Miles Nielsen and Kelly Steward. It’s like indie-folk music.”

Latin, African-American and Indonesian music are also part of the Charlotte’s Web lineup this season. “The series explores other ways that people around the world express themselves through music,” Guschl says. “It’s a really exciting thing for us to be able to bring all of those different kinds of music to Rockford.”

“Full disclosure – my son is going to be in the jazz series,” Guschl says. “He’s a jazz musician in Chicago, so you’ll see the Anton Hatwich Trio on the brochure.”

To Hatwich, a retired hospital pharmacist with a master’s degree in pipe organ performance, Mendelssohn is “sophisticated” music. “It’s what I consider serious music, music that musicians go to school for,” he says. “It’s also about promoting music within the community. I think we’re doing a credible job in terms of maintaining good performances with these wonderful concert series – and we’re doing it on a shoestring budget. We’re one of the unsung secrets of the community.”

MPAC also has a variety of programs for music lovers of varying ages and skill levels.

“Our Young Musicians Series is an opportunity for kids in the area to experience a real, professional recital performance,” Guschl says. Most music students only get to play in ensembles or in front of judges, so this allows them to showcase their talents before an actual audience. Pianists can even play the concert grand.

Music students from third to 12th grade can vie for scholarships through the Chandler Starr Miller Scholarship Competition, which has been awarding music scholarships since 1961. A huge perk for participants: each competitor gets a copy of the judges’ comments offering specific feedback on how to improve their skills.

While the award-winning Mendelssohn Chorale – founded in 1975 by Ralph Nielsen (grandfather of Weep & Willow’s Miles Nielson) – is one of MPAC’s best-known groups, it is currently on hiatus, but other programs offer “weekend warrior” musicians a chance to shine.

The Art Song Project, for which members hunt down songs based on each meeting’s theme, is like a book club for singers. “There’s a $40 fee for the year, but that’s to cover the costs of the accompanist,” Guschl says.

There’s no fee for the Piano Performance Group. “Piano enthusiasts from the area get together and play for each other,” Guschl says. “They meet on our main stage and get to play the big concert Steinway. It’s a way for pianists to celebrate their efforts in perfecting musical pieces by playing them for others.”

MPAC offers the community considerable value for an organization with only one full-time employee, three part-time employees and nine board members. “It’s not the old idea of the Mendelssohn Club – high-society tea. We’ve reinvented ourselves,” Hatwich says. “We’re a group of good, well-intended people who are out to support the community and support music.”

Some Highlights from Mendelssohn’s 2019-2020 Season