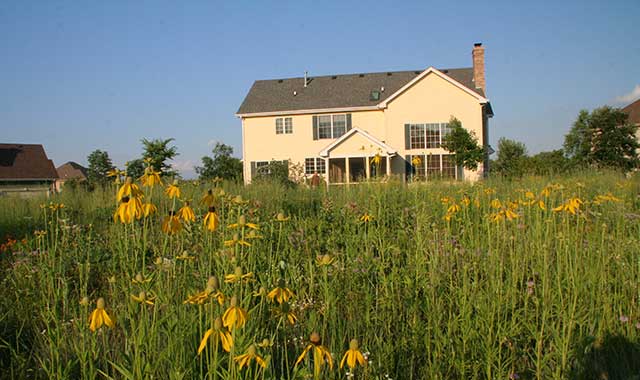 How to Plant With Wildlife in Mind

This health guru wants to change people’s mindsets when it comes to eating. Learn about the meal prep business he created with his wife and find out how he’s inspired a young resident to improve his eating and exercising habits.

Jim McIlroy has seen his share of highs and lows.

As a business owner, the Belvidere resident estimates he’s been involved with nine or 10 operations – from co-owning the Rockford IceHogs to operating Rev’d Up, a family entertainment center.

“I’m a serial entrepreneur,” says the Syracuse, N.Y., native, who moved to Rockford nearly 25 years ago for a job with Joseph Behr and Sons. “I look for gaps and opportunities to bring something of value to the community.”

But along with that entrepreneurial spirit, there’s been plenty of heartache along the way – financial, spiritual and physical, including knee replacement and spinal fusion surgeries. “I’ve been to the top and I’ve been to the bottom,” he says. “I’ve taken risks and I’ve lost everything; I’ve had to move and start all over again. And I’ve gone through a personal reawakening. I’ve had to recalibrate and figure out what’s truly important in life.”

And through all his trials and tribulations, McIlroy believes he’s finally found his calling. These days, McIlroy is bringing the community together, thanks to his latest venture. McIlroy and his wife, Christie, own Food 4 Fuel, a meal prep business that is housed in the kitchen of Carlson Ice Arena.

The idea for the business started in 2013, when the McIlroys and the oldest of their three children started what McIlroy calls a “health conscience journey.” As an adult, McIlroy battled his own weight struggles when he gained 50 pounds. “My body changed. My eating habits changed.
I stopped playing sports,” he says. “As I got older, I got busier, more stressed, making impulse decisions with food. I lost control.”

Through exercise and changes to their diet, the family lost 69 pounds in 90 days. Then McIlroy started dabbling as a health coach. “I found that I could help people lose 10 pounds and get their mind right,” he says. “But after 90 days, they went back to their old ways. They struggled with their relationship with food like we all do.”

“Food is everything,” he says. “We eat when we celebrate, and we eat when we’re sad and depressed. We want to lose weight for that wedding. We want a temporary fix, and then we go back to old habits. We’re looking for immediate gratification. We need to change that mindset.”

In 2014 McIlroy opened the doors to Food 4 Fuel. The business offers healthy, portion-controlled food. Some Food 4 Fuel customers are on weekly and monthly plans. Meals include lean proteins such as chicken, ground beef and ground turkey; carbs such as potatoes and rice; and vegetables. Food 4 Fuel’s Grab-N-Go events on Monday and Thursday nights, held at Carlson Ice Arena, are also popular.

McIlroy, who has a staff of 15 full- and part-time employees, also caters for a variety of special events and businesses, including hospitals, schools and nonprofit organizations. McIlroy has purchased food trucks and more than 20 coolers located at health club partners across the region. Food 4 Fuel has also donated more than 20,000 servings of food to the homeless and underserved.

“I saw something in the news that Rockford was the fourth most obese metropolitan city in the country, and 72 percent of 1,500 middle school students were obese or overweight in the Rockford schools,” he says. “There is a huge need to be a voice. We as parents have done a horrible job teaching our kids what good health looks like. I knew I could be a loud voice.”

And that voice has been found through his meal prep business. “People can do it on their own and they can do it cheaper,” he says. “But if more people were doing it, two-thirds of us wouldn’t be overweight or obese, dealing with high blood pressure and diabetes. We encourage customers to do it on their own. But if you have a weekend where you want to hang out with the family and not worry about meal prep, call Food 4 Fuel and let us handle it.”

Amy Bruscato started using Food 4 Fuel a year ago, when she was training for a body building competition. She grew tired of cooking chicken and rice, so she turned to McIlroy for help with meal prep. “I love his food,” she says. “It wasn’t easy eating the same thing for 18 weeks of training, but it got me to a fifth-place finish.” With the competition long over, Bruscato and her husband still use Food 4 Fuel on a semi-regular basis. “Jim goes above and beyond,” she says. “He’s not doing this for the money. He’s doing this to better the community.”

In addition to meal prep, Food 4 Fuel started a “21 Days to Sprint Confidence” program where clients can purchase meal/exercise plans that include the opportunity to work out at various gyms including Orangetheory, The Gym and Anytime Fitness. “It’s a chance to experience different workouts and continue their wellness journey,” says McIlroy. “Sometimes you need a group to succeed, and sometimes the group needs you.”

McIlroy has helped many people find the path to a healthy lifestyle. Perhaps his greatest story, however, is Ethan Taylor, a 21-year-old Rockford resident who’s struggled with weight for most of his life, reaching as much as 368 pounds.

His lowest point came as a student at MacMurray College in southern Illinois, when he battled not only his weight but depression, drinking and dependency on painkillers.

“I’ve always been the stereotypical fat kid,” says Taylor. “Most of it was eating the wrong things, fast food and no portion control. But things got really bad when I went away to college. I was doing things to ease my pain. I wasn’t trying to kill myself, but I thought I might die an accidental death.”

“When he came in, I saw doom and gloom,” says McIlroy. “He was miserable, fat and sick. He knew he had to do something.”

After talking with Taylor’s mother, McIlroy offered to help. Taylor dropped out of school in October 2017 and moved back home to Rockford. He began a Food 4 Fuel meal plan and a workout program. It was now or never, says Taylor. He also agreed to McIlroy’s plan to go public with his program, mostly through social media. “It was the accountability factor,” he says. “It was hard to not try with everyone watching. This time it clicked.”

Fast forward 1.5 years. Taylor has lost 175 pounds and now is nearly his goal weight of 184. He works out six days a week and meal preps most weeks. Not only does he feel better, he’s developed new friendships through his experience. He’s returned to school, at Rock Valley College, to study exercise science. He also works part-time for McIlroy at Food 4 Fuel. And his depression is “under wraps.”

“I have so much more energy,” says Taylor, who is training for a Chicago marathon in October. “Before, I struggled to walk or ride a bike. Now I run, lift and sleep so much better. I saw it as a daunting task in the beginning, but it gets easier. If you want to lose a lot of weight you have to be mentally prepared. Don’t let little things get you off track. Keep it simple.”

Taylor credits McIlroy for his turnaround.

“Jim is one of the most genuine, kind-hearted people I’ve ever met,” he says. “He’s so positive and wants people to shine in their own light. He’s been instrumental in everything I’ve done in the past 18 months. He’s a great guy.”

McIlroy’s mission is to help Rockford become a top-25 healthiest place to live by 2025. It won’t be easy. But the self-proclaimed workaholic isn’t afraid of putting in the time. “I love every minute of this,” he says. “I’ve found my niche.”