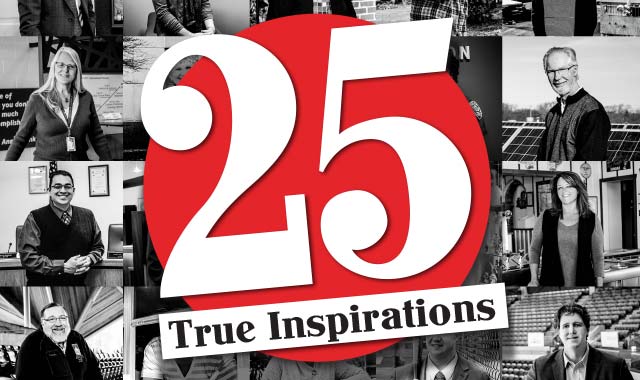 Children who visit Klehm Arboretum & Botanic Gardens now have a new place to explore. Learn more about an exciting water feature and find out why it hits home for one local family.

When Executive Director Alexander Mills began his role at Klehm Arboretum & Botanic Gardens a year ago, he was looking forward to the completion of the large new water feature at the Nancy Olson Children’s Garden.

This project, which has been in the planning and development stages for about two years, is now finished.

The new water feature at the children’s garden has twin streams of water cascading down several small waterfalls and collecting in shallow ponds where children can play. The two streams converge at a large splash pad with eight water fountains jetting into the air. The splash pad and surrounding walkway is made of a porous pavement material that absorbs and distributes water to the nearby landscaping.

“We have been looking forward to the completion of this water feature for a long time as it represents another opportunity to get people of all ages outside and playing, while offering the public a whole new level of engagement with children and their friends and family,” Mills says.

Pat Olson, who is married to the son of the late Dean and Nancy Olson, says her in-laws would be pleased with the garden, which has been enjoyed by three generations of the Olson family.

The garden marked a milestone in Nancy’s life and in the life of the arboretum.

“Twenty-five years ago, we surprised Nancy on her 75th birthday by making a contribution to Klehm so a portion of land could be named in her honor,” Pat says. “She loved children and she loved nature, and so it was a match made in heaven. She oversaw a lot of the initial development of the garden, and it makes me tearful to think of her missing the grand opening.”

The children’s garden has an observation tower for kids to climb on, a gazebo with picnic tables, an alphabet and rainbow garden in bloom throughout the spring and summer, and there’s “Blossom,” the fiberglass cow painted by children.

Nancy was not only involved with the start of the children’s garden, but she was also deeply involved from the beginning in the development of the arboretum and botanic gardens, co-chairing the main committee to help make the grounds more inviting and user-friendly.

“She was an amazingly gracious person and would be so grateful to all the people who have supported Klehm throughout the years,” Pat says. “This garden named in her honor really captures who she was as a person. She was always thinking of others and how to make their lives better.

She would be greatly moved, humbled and pleased.”

Dean was a successful industrialist in Rockford and created a family foundation in the ‘50s to benefit the people of Rockford and to “give back” to his community. The foundation continues to make contributions to Klehm and other organizations in the area. The Olsons were involved in their community as active volunteers as well as being instrumental in getting other organizations off the ground, including Rock Valley College. He died in 1987 and she passed away in 2006.

“The Olson Family contributed throughout their lifetimes with their time, effort and passion for making Rockford a better place, and Klehm is a big part of that,” he says, adding that he hopes the garden will be a high-traffic area that will have something for children of all ages.

The attraction was tested out one sunny spring day in May.

Lyn Oman, the mother of 3-year-old Sophie – a preschooler at Montessori Private Academy – was among the chaperones for an early childhood field trip at Klehm that day. The students were there to learn about the outdoors and look for signs of new life. They made an unplanned stop at the children’s garden.

“The kids loved it,” Oman says. “They were so engrossed in taking their shoes off and splashing around in the water. They were so excited to be there and we will have to take them back when we will have more time. It was hard to pull them away in time for lunch.”

Mills says he can see the garden being a destination for many more school field trips, classes, workshops, story hours and special events. Although there is room to expand the gardens, there are no immediate plans to do so, Mills says, adding that it takes a lot of planning and thinking about what the next best step will be.

“Whenever we do anything at Klehm, we have to be sure it fits in with our mission, which is to ‘Maintain a living museum for the education, enjoyment and inspiration for all people,’” he says.

Attendance and memberships are increasing at Klehm, he adds. “We want to continue to raise Klehm’s profile in our community so more and more people think of coming here with their friends and families to learn, enjoy and volunteer. Especially at this most beautiful time of year, we want to welcome people with open arms and every season has its charm.”

This spring and summer offers new and traditional programs at Klehm, including an Essential Oils Workshop, Woodsong concerts, Hike into the Wild, Yoga among the Trees, a Peace Pole Painting Class, Walks with Swedes, and other events.

Education and Programming Coordinator Samantha Burbach joined the Klehm staff just two months ago. In her current position, she sees herself developing new classes, especially for youth, while offering a more extensive list of opportunities for people of all ages throughout the year.

Her long list of goals includes summer programs for youth in the areas of gardening and nature to get them outdoors while learning useful information.