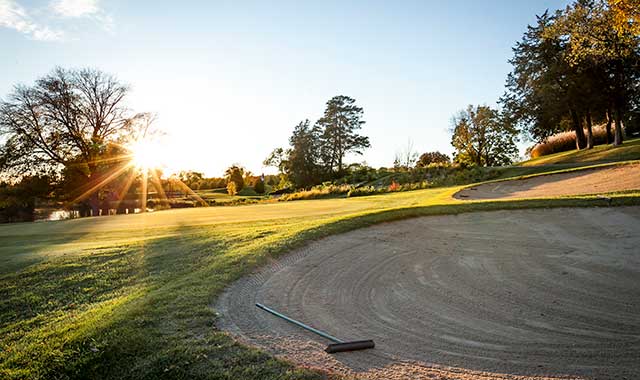 Teeing Up for the Future

With some help from 20 maple trees on his property, Brad Meinert has found a way to beat the cabin fever blues and make life a little sweeter. His homemade maple syrup is all-natural and worth the many hours of labor. Follow along on his journey of transforming sap into syrup.

For the most part, these labor-intensive practices have gone by the wayside as modern syrup-makers utilize updated technology to collect precious sap. We’re left with mass-produced syrup that may or may not contain artificial sweeteners. However, there are still people who prefer the old ways – people like Brad Meinert.

Every year, during a brief window between winter and spring, Meinert taps about 20 trees on his property and makes a product he’s proud of. The unofficial “sugarmaker” of Davis, Ill., is an unofficial master of making traditional syrup.

Thirty years ago, Meinert never considered much of the maple trees on his property. As the owner of Brad’s Barber Shop, in Davis, he worked full-time hours cutting hair, trimming beards and chatting with clientele. One day, a client/friend came into the shop.

“I asked him ‘Whatcha been up to?’ and he talked about making maple syrup,” Meinert recalls. “I just started asking him all these questions about it.”
For a couple of years, Meinert researched syrup making in small operations. Finally, the “boredom” of cabin fever made him sharpen his tools.

“There’s not a whole lot to do late February or early March,” Meinert says. “I thought this would be a good way to spend a couple of days enjoying the outside. Plus, maple syrup is awfully good!”

It took about three years for Meinert to feel confident in syrup-making. First, he gathers all the wood he needs to keep a consistent fire going.
“I was the Village President of Davis for 20 years, until 2017, so I used to ask the village maintenance man to dump all his wood from tree-trimming in my yard,” Meinert says. “That’s mainly how I kept wood in previous years.”

Last year, he had to chop down a pine tree on his property. The “soft wood” will play a part in this year’s syrup making process.

“It’ll burn really fast, but I have some other wood I can mix with it that’ll burn longer,” Meinert says. “The best kind to use, if you can, is a hard wood, like oak. It’ll burn for the longest.”

Sap runs best from maple trees when the temperature is around 40 degrees during the day, but below freezing at night. The sunnier and less windy it is, the better. As soon as the weather enters this range, Meinert takes a walk down by the railroad tracks in town.

“Sumac grows wild around the railroad track,” Meinert says. “I go down there every year and cut off branches to make about 30 spiles.”

Of course, he could just buy spiles. But this way is more fun.

“It’s closer to how it used to be done years ago,” Meinert says. “Plus, I did use spiles I bought one time, and I didn’t have as much luck.”

Using an electric drill, Meinert puts a hole through the pulpy center of the sumac branch. Then, he uses his jack knife to taper the end of the branch. This gives him a makeshift spile for retrieving sap.

“The eclectic drill is probably the most modern tool I use in the whole process,” Meinert says.

Meinert uses his drill once more to make small holes in his maple trees – about 2.25 inches deep at a 10-degree angle. Then, he pounds his spiles into the holes.

“The sap starts dripping out, and I nail gallon-size containers to the trees to catch it,” Meinert says. “I always use distilled water containers. Milk containers don’t work because you can always smell it.”

As long as the sun is shining, the temperature is above freezing, and no wind interferes, the sap drips steadily. Still, some trees just happen to give more sap than others.

One important lesson Meinert has learned: you never want to put a new tap directly above an old tap from the previous five years.

“When you drill a hole, there’s a scar in the tree and sap won’t flow,” Meinert says. “You can drill a hole right beside or below a previous tap, but not directly above it.”

Depending on the thickness of the tree trunk, Meinert puts one to four taps in each maple tree. Some days he collects up to 2.5 gallons of sap, some days there might not be anything if the wind picks up.

“I never do more than four taps – I don’t want to take all the sap away from the tree,” Meinert says. “But I’ve been doing this 30 years and it never seems to hurt the trees any.”

Once Meinert collects sap from the maple trees – a process that takes a week – he has about a week and a half before it starts looking cloudy. The cold weather at night helps preserve the sap during this time.

“At this point, it does have a hint of a sweet taste to it,” Meinert says.

“I have a little fire pit down at the end of the lot, and I wake up around 5 a.m. to get a good, even fire going,” Meinert says. “Then, I put my containers over the fire and fill them up with sap.”

The water evaporates, leaving behind syrup. Meinert boils four small batches of sap at a time, adding more sap each time a container gets low. At the end of the day, he combines the four containers into one.

“The closer it gets to being done, the smaller the bubbles are,” Meinert says. “I usually go from 5 a.m. to 9 p.m. You have to watch the sap really well, because when it’s close to being done, it burns easily. I mean in a snap.”

Once the bubbles are really small, Meinert can’t run to the house for anything.

“That’s how I’ve burnt two or three batches,” he laughs.

He finishes the boiling process over the stove in his house, where he can keep a close eye on the syrup’s texture.

“A good finished product is a light amber and has the consistency of honey, but maybe not quite as thick,” Meinert says. “And it has a sweet maple flavor, of course. The way I do mine, there’s a hint of a smoky taste to it.”

If Meinert can make a gallon and a half of syrup each year, he’s happy. Since he started, there was only one year he had no syrup at all.

“I got all done one year and tripped up the steps trying to bring it in the house,” he laughs. “It would have been a lot of syrup, though.”

He gives away small samples of the final product to a few of his customers at the barbershop, and shares the rest with his family.

“It’s just something enjoyable for me to do,” Meinert says. “I like the finished product, and when you can’t mow a yard or plant a garden, it’s a good way to spend time outside. It’s just a relaxing way to keep busy.”