You might recognize this Rockford-area real estate firm for its catchy jingles, but clever marketing is only part of the formula that’s helped this firm to become one of the region’s oldest and largest specialists in real estate. 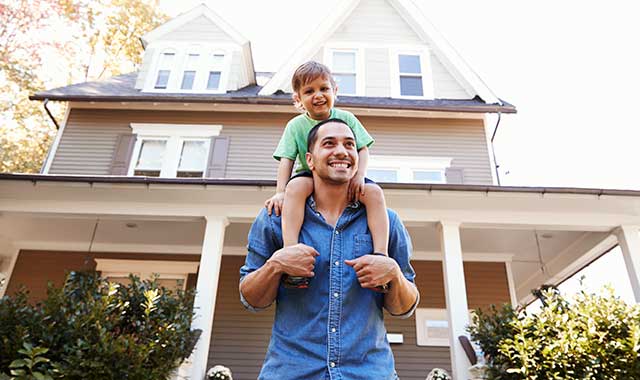 You’re washing dishes or playing with the kids, TV on in the background, and then Gambino Realtors’ unmistakable jingle sings out.

That catchy little earworm is an important tool for keeping Gambino in the forefront of prospective homebuyers and sellers. And it’s exactly what Jonathan Krause, president of Gambino Realtors, wanted out of the popular tune.
“We hired a marketing firm to develop a jingle for us back in 2005, and that was their very first attempt,” Krause says. “I couldn’t get it out of my head. We’ve been running that jingle more and more, and it helps people remember our name.”

Buying or selling a home can be an overwhelming and sometimes stressful task, but getting customers through the experience with some enjoyment is a major pursuit for Gambino, which handles both residential and commercial real estate transactions.

“It takes about 30 to 45 days to purchase a house, and along the way, you might come across challenges with financing, challenges with home inspections and other details that need to be attended to,” Krause says. “We go the extra mile by making sure our customers don’t have to worry about those details.”

Started in 1923, Gambino Realtors is currently one of the oldest and largest real estate firms in the greater Rockford area.

Over the years, the firm has separated itself from competitors by focusing on the agents it hires and their approach to customer service. Instead of simply taking a laundry list of square footage needs and other requests from homebuyers, Gambino agents take a deeper look into the client’s specific needs and wants. This strategy, Krause says, usually gives an agent more information to work with.

“There are times when a buyer will tell us they only want a ranch-style house,” Krause says. “We’ll talk to them and ask for their vision, or why they’re only looking for a ranch. Through discussion and our expertise, we might be able to show them another style of home that they never even considered. Instead of getting the hard facts about a house, we try to figure out why someone is looking for a particular home.”

Krause says Gambino’s nearly 100 agents on staff are the heartbeat of the company.

“When a Gambino agent does an excellent job, word gets around the area,” he says. “The quality of services they perform each day has allowed our company to do well. Our success is tied to the success of those agents, and without them, there is no real estate company.”

To make sure those agents remain at the top of their game, Krause tries to hand them all of the tools they need.

“I try to provide all of the support, branding and name recognition that I can, so when an agent is out in the public and someone sees the Gambino name, they know instantly what it is, and what that agent does for a living,” he says. “Hopefully, our name has a good reputation, which also helps the agent to succeed. The agents are very skilled, and they’re able to take care of a problem before it becomes a bigger problem, so all you have to do is just pack and move.”

Always looking to build on the firm’s sustained success in the real estate market, Krause and Gambino Realtors seek new opportunities when possible. Gambino recently launched an electronic magazine that hits some 62,000 homes in the area. Showing the firm’s prime listings, the magazine is targeted to people who earn at least $250,000 a year.

“When it comes to selling a home, we do a lot more marketing than other companies do,” Krause says. “We’re always trying new ways to get our listings out in front of prospective buyers.”

The company has also staked a competitive advantage on the fact that it’s locally owned and operated, unlike some competitors that are part of a national organization.

“Other companies may have affiliations with franchises that are owned by someone else in another part of the country,” Krause says. “Those funds leave the marketplace, and they leave our area.”

Krause has experienced tremendous swings in the real estate market since he joined Gambino in 1985. At that time, interest rates on a home mortgage still stood at a whopping 15 percent, he says. Then, interest rates decreased, home sales increased and sale prices increased – and in 2007 the market totally fell out.

“I didn’t know if we’d survive, so we had to take some drastic measures to reduce overhead,” Krause says. “We hung on by the skin of our teeth. I don’t anticipate that’ll happen in the next five years, but if it did, the survival lessons that I learned will help us.”

During the worst times of the recession, Krause and his team cut marketing efforts and closely examined their spending.

“I had less visibility and less marketing, but I was able to keep the lights on, and as the economy improved, I did more marketing. But, I’m being careful not to overdo things,” he says. “We also had to let staff go, but one of the lessons that I learned was to keep your overhead in check.”

Krause encourages anyone looking to sustain business success or get an idea off the ground to keep things simple.

“My advice would be to follow the basics,” he says. “If you perform whatever service or product that you have to the very best of your ability, and you market it to the target audience, you’ll be fine,” he says. “It’s worked for us because we have the best agents, and we market like no one else.”

Krause says he’s proud of the work Gambino has done over the years, and he expects the firm’s success to continue.

“People can definitely trust us when it comes to buying a house,” Krause says. “We wouldn’t be selling as many homes if we didn’t provide excellent service. We would’ve been out of business decades ago. We have the best Realtors in the business, with excellent results, and the testimonials they receive is evidence of that.”