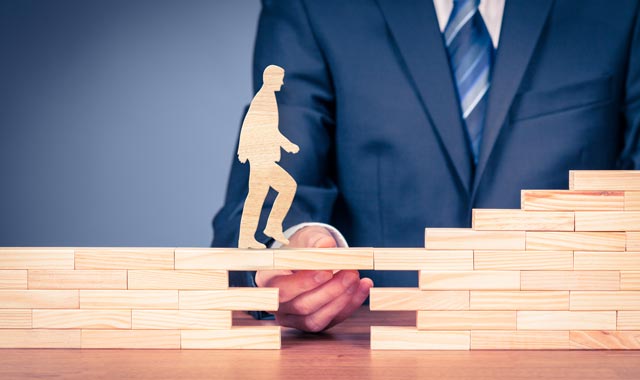 The Rockford area’s NBC affiliate is standing tall after netting recognition for its work on the national stage. Meet the leadership behind this station and how they’ve distinguished their brand against competitors.

In a three-station TV market, it’s hard to stand out.

Everyone covers breaking news. Everyone strives to be hyper-local. Everyone wants to win.

But not only has 13 WREX risen above the local TV crowd, it’s standing tall on the national stage.

“It’s one of the pre-eminent awards in all of broadcast journalism,” says news director Josh Morgan. “And we were the second-smallest station to ever win the national award for Overall Excellence.”

There are 210 TV markets across the United States, and Rockford sits in market 138. The Murrow Award breaks those markets into 14 geographical regions, with Rockford facing similar smaller stations from Illinois, Indiana, Michigan and Ohio. Within those regions, stations compete for various awards. In 2018, WREX brought home three of those regional awards: one for Excellence in Social Media, one for Continuing Coverage for their series “Hooked: The Opioid Epidemic Hits Home” and one for Overall Excellence. It was the third straight year WREX captured the Overall Excellence honor.

Winning a Regional Murrow automatically puts you in contention for the national award, which had eluded WREX.
Until now.

“The biggest, happiest moment in my career was going to New York to pick up this award,” says John Chadwick, now in his 22nd year as station manager.

It was a peak moment for a station that has been on a steady climb for the past several years, a time during which it won regional Murrow awards in 2015, 2016 and 2017.

Chadwick has a theory about the continuous recognition.

“It was when Josh came,” he says of Morgan, who joined WREX in 2013 after stints at WPSD in Paducah, Ky., and WLUK in Green Bay, Wis.

But Morgan was quick to deflect the credit to the staff and their willingness to accept a new way to approach their jobs.

“When we made changes a few years ago, it started with regular meetings,” he says. “The best way for us to win every single day, on every single story, is for us to work together and share ideas. If each person in the station feels like they have a say, and their idea could be our next big project, that’s when you start to build something special.”

“So many people have helped build this station into what it is today,” he says. “A lot of really good, talented people. And right now we have a group that has raised the bar to its highest level to date with the type of hard work and quality journalism they are producing each and every day.”

“It wasn’t an easy process at first,” Chadwick says. “I think everybody was acting like they were from Missouri. I don’t think there was a lot of faith that we were going to follow through on any of their ideas.”

“The first idea was almost flippant, but because we followed through and it hit, they gained more confidence to come up with more ideas,” Chadwick adds.

The next step was taking those ideas and making them unique to WREX. The key to that was innovation.

“When it comes to being innovative, you have to take chances,” Morgan says. “You can’t just say you’re innovative. Sometimes people do that, but those are just words. We can prove it.

“If there is big breaking news, the first thing we say is ‘How can we do this differently?’ It could be my idea, a photographer’s idea, a producer’s idea or an anchor’s idea. It is truly a team approach. If it’s always coming from the same person or people, you’re no longer innovative.

“We took the phrase ‘That’s how we’ve always done it’ and threw it out of the newsroom.”

Morgan and Chadwick like to point to the live news broadcast from Rockford City Market every Friday in the summer as an example of that “different” approach. It’s done with live backpacks rather than a live satellite truck. That’s a risky idea, but a proven success.

“And that was not a manager’s idea,” Chadwick says. “It came from an employee.”

“We take a ton of risks,” Morgan adds. “I talk to the other stations, including my previous ones, and tell them what we do here with half the staff they have, and they ask, ‘How can you do that?’ I would argue that a lot of things we try are not that hard, you just have to have the ‘you-know-what’ to go out and do it. We may screw up once in a while, but 99 times we do it well and it’s worth that one screw-up.”

But Morgan and Chadwick both emphasize their driving force is to answer the needs of their viewers, not to win awards.
“If you’re sitting back trying to win awards, you’re not serving your viewers; you’re just serving yourself,” Morgan says.

“First, it comes down to what can we do for the community?” Chadwick adds. “What does the community need? How do we address those needs? And to answer that, it takes everybody working together. We’re a relatively small operation, with 43 people including 19 in the news department. So, it takes people in the sales department, people in engineering and everybody in the building.”

And, like a constantly spinning wheel, that buy-in breeds quality work, which brings awards, which spurs excitement to do it again.

“They get their batteries recharged from things like this,” says Chadwick, referring to the Murrow Award. “They like it when we have this success, and they go way above and beyond because of the burst they get from helping. That takes us into these kinds of situations where we win these kinds of awards. And it all started with just trying to serve the community.”

One may think the biggest detriment to the station is its size, like its fellow small-market stations. It’s a starting point for many new journalists and often a stepping-stone rather than a destination.

But Chadwick doesn’t look at that as a challenge.

“I view it as rewarding,” he says. “You know you’re going to have most of the people in the building for two to three years. So, if you know that, what do you do to maximize that experience?

“For me, helping them grow, and seeing them prosper and seeing the places they go is tremendously rewarding. And the self-serving part of it is, if you get people going to good places, what a great recruiting story. It says: If you come here, the sky’s the limit for you.”

Actually, the biggest challenge the folks at WREX face is keeping up with their own success.

“Now that we’ve reached a standard of where we want to be, we have to maintain it,” Morgan says. “As they say, it’s easier to get to the mountaintop than it is to stay on top.

“We have to try to separate ourselves from our competition every day,” he continues. “And not just in our market, but across the board, across the country. We want people to see that we do things differently. We want to stand out. Our viewers then can say, ‘That’s the station that does things special and we’ll go to them.’”