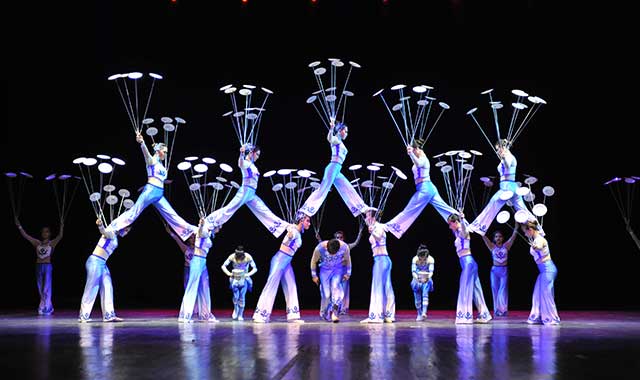 There’s so much to do in our region! Here’s a look at what’s coming up this season at some of the many arts venues near you.

“Yes, Virginia: The Musical”
Dec. 21, 7 p.m. Based on the story of eight-year-old Virginia O’Hanlon, who wrote a letter in 1897 to the editor of the New York Sun asking about the existence of Santa Claus. The answer has become history’s most reprinted newspaper editorial. Children’s Theater Project/Youth Theater Project (CTP/YTP), Nordlof Center, 118 N. Main St., Rockford. Info: rockfordpubliclibrary.org.

‘Million Dollar Quartet’
Jan. 17-18, Thu. 7:30 p.m., Fri. 8 p.m. The place is Sun Recording Studio in Memphis; the date is Dec. 4, 1956. Up-and-comer Jerry Lee Lewis and rockabilly king Carl Perkins are recording together. Elvis and Johnny Cash stop by the studio and voilà! The four musicians make history as they record together for the first and only time. Coronado PAC, Rockford, (815) 968-0595, coronadopac.org.

Elvis Tribute
Jan. 18, 8 p.m. A concert celebrating the music of Elvis, era by era, from the rockabilly years through the military years, the movie years, the ’68 come back and the Las Vegas and concert years. Coronado PAC, Rockford, (815) 968-0595, coronadopac.org.

The Three Little Pigs – Florentine Opera
Jan. 27, 3 p.m. An opera for children based on the classic tale. Children sit on the stage for an up-close perspective. Young Auditorium, UW-Whitewater, Whitewater, Wis., (262) 472- 2222, uww.edu.

Schubertiad
Feb. 1, 7:30 p.m. Some of the area’s finest musicians come together in celebration of Schubert. Tenor Michael Day performs a selection of Schubert Lieder (art songs) and the concert culminates with a performance of the famous “Trout” piano quintet. MPAC, Mendelssohn Hall, Rockford, (815) 964-9713, mendelssohnpac.org.

The Iliad, The Odyssey and all of Greek Mythology
Feb. 1-3, Fri.-Sat. 7 p.m., Sat.-Sun. 2 p.m. In 99 minutes or less, the cast speeds through all of Greek mythology, in a zippy and secretly educational show, covering silly decisions, absurd destinies and goofy characters. CTP/YTP, Nordlof Center, Rockford. Info: rockfordpubliclibrary.org.

‘Jersey Boys’
Feb. 7, 7 p.m. Broadway’s Tony Award-winning musical takes you behind the music for the true story of how four blue-collar kids from the wrong side of the tracks, Frankie Valli and The Four Seasons, became one of the greatest successes in pop music history. Young Auditorium, UW-Whitewater, Whitewater, Wis., (262) 472- 2222, uww.edu.

‘Elephant’s Graveyard’
Feb. 8-9, 14-23 & 28, Thu.-Sat. 8 p.m. It’s been years since the tiny town of Erwin, Tenn., has seen a circus parade and the townspeople are starving for a show. Sparks World Famous Shows has a special attraction for 1916: the largest living land animal on earth. [usual]Suspects, Nordlof Center, Rockford. Info: rockfordpubliclibrary.org.

Jodi Beach
Feb. 10, 3 p.m. In addition to being a singer/pianist, Ms. Beach is a storyteller whose performances include elegant ballads, love songs, swaying Latin rhythms and stomping swings that take the listener through a lifetime of memories in a matter of minutes. MPAC, Starr Center, 415 N. Church St., Rockford, (815) 964-9713, mendelssohnpac.org.

Shades of Bublé
Feb. 10, 6 p.m. The three-man tribute to Michael Bublé brings to the stage the entertainer’s swinging standards and pop hits, such as “Feeling Good,” “Come Fly with Me” and “Save the Last Dance for Me.” Egyptian Theatre, DeKalb, Ill., (815) 758-1215, egyptiantheatre.org.

John Mellencamp
Feb. 14, 8 p.m. Rock and Roll Hall-of-Famer Mellencamp entertains with classics like “Hurts So Good” and “ROCK in the USA” as well as material from his new album, “Other People’s Stuff.” Coronado PAC, Rockford, (815) 968-0595, coronadopac.org.

‘My Fair Lady’
Feb. 21-April 7, see website for times. The Cinderella story of Eliza Doolittle, a bedraggled, cockney flower girl, who is transformed into an elegant lady by the brilliant and irascible Professor Higgins, who teachers her the proper way to speak and behave. Fireside, Fort Atkinson, Wis., (800) 477-9505, firesidetheatre.com.

The Accidental Hero
Feb. 23, 7:30 p.m. This multimedia performance recounts the story of a WWII officer, Matt Konop, who liberated the Czech villages of his grandparents. Using written accounts, photos and film footage, grandson Patrick Dewane plays multiple roles, bringing to life his grandfather’s journey from Omaha Beach to the Battle of the Bulge to the end of the war. MAC, Monroe, (608) 325-5700, monroeartscenter.org.

MPAC: Chandler Starr Miller Scholarship Competition Recital
Feb. 24, 2 p.m. Now in its 58th year, the competition offers young musicians an opportunity to compete with their peers for awards and valuable feedback from professional adjudicators. Open to students from third grade through high school; first place winners in each division perform in the Winners’ Recital at Mendelssohn Hall. MPAC, Rockford, (815) 964-9713, mendelssohnpac.org.

‘Rise Up, O Men’
March 3, 3 p.m. The Church Basement Ladies are back. As the church prepares for participation in the town’s 1964 Centennial celebration, the comings and goings are seen through the eyes of the menfolk, who have their own problems to solve. Young Auditorium, UW-Whitewater, Whitewater Wis., (262) 472-2222, uww.edu.

AE: “Silent Sky”
March 7-17, Thu.-Sat. 7:30 p.m., Sat. 4 p.m., Sun. 2 p.m. In 1905, Henrietta packs her bags for an exciting new job as a “human computer” at Harvard Observatory. She soon discovers that her role there is limited, but her mind is not. The inspiring story of Henrietta Swan Leavitt, a woman who, quite literally, changed the way we see the universe. AE, Rockford University, Cheek Theatre, (815) 394-5004, artistsensemble.org.

‘The Comedy of Errors’
March 13, 7:30 p.m. Long-separated twins, tricky servants, a jealous wife and her lovelorn sister are a few of the characters who are steeped in this story filled with mistaken identities and slapstick humor. American Shakespeare Center, Young Auditorium, UW-Whitewater, Whitewater, Wis., (262) 472-2222, uww.edu.

‘The Sound of Music’
March 26, 7:30 p.m. Rodgers and Hammerstein’s beloved musical story of Maria and the Von Trapp family, in the years immediately preceding World War II, with score including “My Favorite Things,” “Edelweiss” and “The Sound of Music.” Coronado PAC, Rockford, (815) 968-0595, coronadopac.org.

Red Hot Chilli Pipers
March 29, 8 p.m. With their signature “bagrock,” this nine-piece ensemble, consisting of pipers, guitarists, keyboardists and drummers, entertains with a fusion of rock anthems and the great tunes from the glens and the mountains of Scotland. Egyptian Theatre, DeKalb, Ill., (815) 758-1215, egyptiantheatre.org.