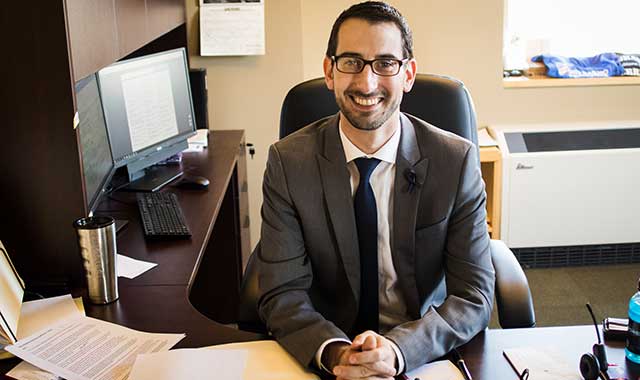 Learn more about the colorful exhibits and artifacts inside this unique tribute to Rockford’s past residents, and discover what awaits inside the adjacent Graham-Ginestra House, the museum’s newest addition.

If you’re a fan of Rockford’s rich and vibrant history, you’ll enjoy what awaits inside The Ethnic Heritage Museum (EHM), 1129 S. Main St.

The museum has a room for each of the six ethnic groups it represents: African-American, Hispanic, Irish, Italian, Lithuanian and Polish. In each room, you’ll learn about the ethnicity’s history, traditions and culture with the help of Rockford-area maps, artifacts, photos and vintage clothing.

“These galleries represent the immigrant groups originally settling in southwest Rockford, where the city began,” says Sue Lewandowski, the museum’s board president. “People can touch base with these cultures and learn about them. This history is fascinating, when you learn how things started and who the first groups were.”

To celebrate the holiday season, each gallery has Christmas-themed displays and traditions that can be viewed until the end of December.

“The museum houses items and displays recognizing the good old days,” Lewandowski says. “Guests can see how people lived and what they did in Rockford years ago.”

The museum, which opened in 1989, set up shop inside a quaint, historic home built in the 1850s. Menroy Mills, an area pharmacist, originally chartered the house. The museum was founded to celebrate and commemorate the founding ethnic groups that first settled in Rockford. It operates under the leadership of a 14-member volunteer board.

“Each of the galleries has a director who oversees how they want their area to be set up,” Lewandowski says. “The board also has committee volunteers.”

Area students are encouraged to visit, but sometimes staff members take the museum to them, packing up displays and artifacts, and taking them to local classrooms.

“Both workshops and museum tours help children make a connection with the past,” Lewandowski says. “We have former teachers who work with us, and they take some of the artifacts and materials into the Rockford schools so they can talk about the city’s past in the classroom.

This is our way of taking history on the road, and we’re pleased to share Rockford’s past.”

In 2016, the museum added to its collection by acquiring the adjacent Graham-Ginestra House. The 1857 Greek Revival-style home, which is on the National Register of Historic Places, represents the homestead of two prominent Rockford men and their families: Freeman Graham Sr. and Leo Ginestra.

In purchasing the Graham-Ginestra house, the museum has created a historical corridor it calls the Heritage Museum Park.

“The Graham-Ginestra House is a rare gem in Rockford, especially with the beautiful architecture that dates back to 1857,” says Jocelyn Hare, director of the Graham-Ginestra House. “While both museums were formed for different purposes, they display the culture and life of Rockford from the time this great city was first founded. It’s important to preserve our past in order to protect our future.”

Graham, the builder of the home and a successful businessman, was one of the first settlers in Rockford’s southwest side and served as alderman.

He was the manager of Everson, Talcott & Co., a farm implements manufacturer in the Water Power District, and he was co-owner of the Rockford Cotton Mills. In addition, he created Graham Bros. Distillery, the first sour mash distillery in Illinois.

Ginestra, a Sicilian immigrant, bought the home in 1927. He was a mechanic and the owner of a mobile home park. He was also an avid hunter and sportsman. The home became a familiar part of the Italian community and commercial thoroughfare.

“Leo’s daughter, Therese Ginestra-Schmeltzer, and her husband inherited the house in 1978 and kept it open for tours until her death,” Lewandowski says. “She wanted the house left as a museum, but a dentist bought it as an investment. He never lived in it and the house remained empty for years. The EHM was finally able to buy the home to honor Therese’s desire to continue it as a museum.”

The house has many historical elements still side, including stained-glass windows, a freestanding staircase, vintage chandeliers and a gray, cut-marble fireplace.

“Guests are taken on tours showcasing the original fixtures, furniture and architecture,” Hare says. “The elegant, historical home offers insights into the lives of esteemed entrepreneurs and their families. We also offer a variety of experiences for guests to attend, such as English tea parties, whiskey tastings and House in Mourning, which commemorates the passing of Graham.”

The House in Mourning event, which happens in February, showcases mourning customs from the 1800s and features paranormal tours.

“We are also bringing back a temporary display commemorating Ben Abruzzo, an American hot-air balloonist, businessman and relative of the Ginestra family.

“In order to move forward, it’s important to learn where we come from,” Hare continues. “By learning about the history of Rockford, we learn about the ups and downs, and the people who made impacts in the community. We’re proud to be a part of this community and we’re excited to teach others about it as well.”

Guided tours are available each Sunday from 2-4 p.m. The museum is closed Dec. 23. Guests can visit both the museum and the Graham-Ginestra House with a single entrance fee. Scheduled tours are also available during the week. Call (815) 962-7402 for more information and to schedule a tour, or visit ethnicheritagemuseum.org.