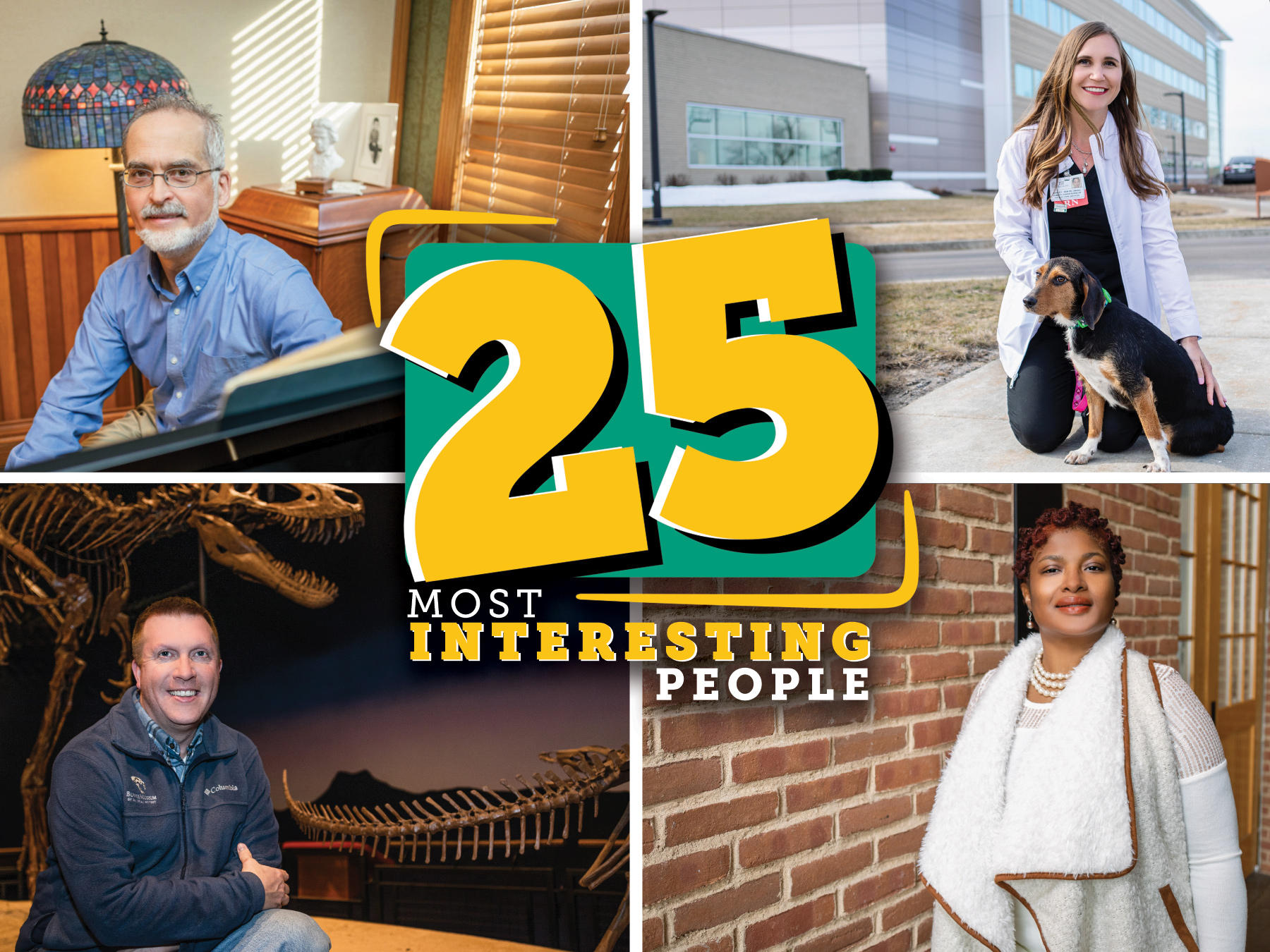 This time of year, their bright colors light up our landscape in amazing ways, but there’s far more to love about trees than mere aesthetics. Explore the many ways trees enrich our communities and our environment, and meet the people whose life work is to protect them for generations to come.

“One can read its whole history in the luminous, inscribed disk of its trunk: in the rings of its years, its scars, all the struggle, all the suffering, all the sickness, all the happiness, and prosperity stand truly written, the narrow years and the luxurious years, the attacks withstood, the storms endured.” – Hermann Hesse

What better time to appreciate the trees around us than in autumn? Landscapes burst with fiery oranges and yellows so bright they look fluorescent. Velvety reds and mysterious purples cluster among warmer hues, the treetops creating a tapestry of fall foliage.

Far beyond aesthetics, there are many benefits to a healthy and prosperous community of trees. It may seem like a no-brainer, but they contribute much to our own well-being, our environment and even our pocketbooks.

The shade they offer reduces the need for air conditioning, and wind-blocking evergreens can save on winter heating. According to research by Morton Arboretum, in Lisle, 100 mature trees can intercept 250,000 gallons of rainfall per year, contributing to our stormwater management as well. Children who grow up on tree-lined streets are less likely to have asthma, and folks who live near greenery are less likely to be obese. Trees increase property value, and they provide shelter and food for animals.

The rolling landscapes of northern Illinois and southern Wisconsin provide an unrivaled view of Mother Nature’s spectacular show this fall. From the trails of a forest preserve to your backyard, the beauty of this season seems to be everywhere.

Look around our region and you’ll find plenty of European buckthorn, boxelder, black cherry and American elm – the most common tree species here, according to the regional tree census conducted by Morton Arboretum and the U.S. Forest Service. But not all of these species are native to the Midwest. Estimates suggest there are some 157 million trees in the greater Chicago region, and together, they remove nearly 677,000 tons of carbon per year and 18,080 tons of air pollution.

At about 20 percent canopy cover, the Chicago area has half the tree canopy of other urban centers. While some suburban areas, like Trout Valley, are densely covered (66 percent) other areas are more sparse. Lisbon, in Kendall County, has just 3 percent cover, but the area is highly agricultural.

In part, the region’s smaller canopy cover is due to the invasive emerald ash borer (EAB), an exotic beetle from Asia discovered here in 2002. The small green beetle destroys ash trees by feeding on bark and outer sapwood, eventually cutting off the tree’s supply of nutrients.

During the 2010 regional tree census, the area’s decline in ash trees was notable but the impact wasn’t yet apparent, says Lydia Scott, director of the nonprofit Chicago Region Trees Initiative (CRTI) and manager of Morton Arboretum’s Community Trees Program. That census counted nearly 13 million ash trees, but almost a decade later, many of those trees are gone; those that remain face an uncertain future.

CRTI joins together organizations from seven northern Illinois counties, including organizations like Morton Arboretum. With a mission to protect and enhance the health of the urban forest in this region, the initiative has been applying strategies to build a healthier, more diverse landscape, primarily through education and engagement with the public. The group offers urban forestry training programs to the public and those who work professionally with trees, including municipal public works departments.

“We want people to understand why trees are so important,” says Scott. “We want to teach them why they should care about that tree on their property so that they can advocate for trees in their community.”

The initiative is receiving a big boost from the Illinois Tollway, which, this past April, announced with The Morton Arboretum Center for Tree Science that it plans to plant 58,000 trees along the state’s highways while developing new research on roadside trees.

Diversity in the Landscape

The urban forest includes all trees in a settled region, on lands both public and private. With trees disappearing from our landscape, there’s a growing imperative to replenish and replace the canopy in a sustainable manner.

The average person can do a lot to cultivate the canopy around their home. The simplest thing is to water trees during dry periods. Like people, trees can be more susceptible to illness or disease when they are experiencing stress. Planting trees that will reach varying heights is a helpful tactic if large areas of space are not available.

Furthermore, when replacing trees that are diseased or dead, resist the urge to replace them with the exact same species.

Jon Carlson, owner of J. Carlson Growers in Rockford, specializes in trees, and his more than 35 years of experience have equipped him with a unique knowledge of the optimal conditions for a tree to grow. Carlson is committed to helping his customers find the right fit for their property, no matter what kind of tree they might be looking for – or even if they have no idea what kind of tree they may need.

“We encourage people to bring in pictures of their yard. We will visit your home to see what might work best. And, of course, we try to educate our customers,” Carlson notes.

When it’s time to replace a dying tree, Carlson encourages replacing it with something sturdy that’s likely to stand for a long time. His nursery grows nine species of oaks, including the bur and white oak. Kentucky coffee tree is also well-suited for urban landscapes, he says.

“Male ginkgos are another good option,” says Carlson, adding that the female variety produces an unpleasant-smelling fruit that falls in autumn. “A ginkgo is a super-tolerant urban tree; you’ll see them alongside many city streets.” Their leaves turn a brilliant yellow in autumn and fall off seemingly all at once.

Planting an assortment of vegetation is vital, because it saves an ecosystem from sudden desolation, as happened in the 1930s and ’40s with Dutch Elm Disease. The fungal pathogen arrived from Asia and Europe, infecting elm trees via wind-borne spores. The spores travel into the plant’s vascular system, clogging the arteries and causing the tree to wilt. The disease rapidly wiped out entire boulevards lined with American Elm trees.

“Diversity is a hedge against adversity,” says Greg Rajsky, a naturalist and educator at Severson Dells Nature Center in Rockford. The best way to support the trees in your neighborhood, he says, is to plant more than grass around your home.
“All of us can install native plants in our gardens,” he says. “Even the plants in container gardens, on apartment balconies, can support beneficial pollinators.”

Planting native species that thrive in a particular climate and soil type helps, too. Trees like white pines and maples do well in this area.

Maples are a classic part of the local landscape and do not currently face any dangerous pathogens, says Rajsky. They can, however, be attacked by fungi that leave small “tar spots” on the leaves. This is purely cosmetic in nature and poses no long-term threat to the tree.

White pine is one of the only conifers native to northern Illinois and southern Wisconsin. It’s more common farther north, particularly along Lake Michigan. Quite resistant to disease, the white pine fits in well with other native flora, Rajsky says.
White pines transplant easily, according to Rajsky, and can grow 50 to 80 feet tall. They grow quickly, too – about 24 inches of height per year. Because they can grow quickly, it’s important to know how much space your tree will grow before putting it into the ground.

But at Severson Dells and the other properties of Forest Preserves of Winnebago County (FPWC), every day brings an awareness of our native oak species. Dedicated efforts are underway to protect the natural shelters that existed here long before European settlers arrived. Part of preserving that natural heritage involves saving what few oak savannas remain in northern Illinois.

Naturalists generally agree that an oak savanna is a lightly forested grassland dominated by oaks, with about 50 percent canopy. Much of the Midwest was once home to oak savannas.

“Savannas were traditionally areas that were used for homesteads, towns and cities,” says Mike Groves, natural resource manager for FPWC.

When settlers occupied the savannas, their presence forced out certain animal species and discouraged certain plants from growing in the changed environment.

In an effort to conserve and reverse the damage to these spaces, FPWC executes prescribed burns every spring and fall, much as nature did before settlers. Wildfires stimulate the growth of native species, reveal soil layers to increase seed vitality and renew growth in the savanna. The fires also inhibit invasive species that can choke out native growths.

FPWC encourages the public to engage in its conservation strategies through its R.E.A.P Volunteer Program, which offers hands-on habitat restoration training. The third Sunday of each month, from April through October, volunteers are encouraged to show up at select preserves. Before tearing into the brush, naturalists teach participants how to identify invasive species and collect native seeds. Afterward, volunteers are invited to join guided hikes or other activities.

How to Help Our Trees

Head about 60 miles northwest of Chicago, and you’ll find yourself at properties managed by The Land Conservancy (TLC) of McHenry County, a nonprofit land trust working to preserve and maintain our region’s natural landscape.

“We can’t do this important work without the support of our community,” says Sarah Michehl, community engagement specialist.

Groups like TLC, the Barrington Area Conservation Trust and the Natural Land Institute work with landowners to preserve open, natural or agricultural land in perpetuity. Through special legal means, they create conservation easements on a property that protect the land against future development while staying under private ownership. The group’s Conservation@ program also encourages individuals to integrate eco-friendly gardening at home, work and school.

“Since McHenry County was permanently settled in the 1830s, this area has lost 87 percent of its native oak woodlands,” Michehl says. “These woodlands provide valuable wildlife habitat, add nutrients to the soil, prevent valuable soil from eroding away, and lend scenic beauty to our natural areas and neighborhoods.”

TLC is financially supported by individual donations and memberships. Its members receive invitations to join special community events, discounts to attend workshops and training, and notices on volunteer events that support private parcels owned by TLC.

Some of these properties are opened to the public. See the Granny Oak, a 350-year-old bur oak at the Hennen Conservation Area, on Dean Street south of Woodstock. Head to Harvard Gateway Nature Park, an 18-acre parcel of land owned by TLC south of downtown Harvard, and follow the short loop trail and bilingual interpretive signs to see what is believed to be the largest white oak in the county. Experts estimate it’s more than 400 years old. Trail maps to both of these locations are available at conservemc.org.

As fall approaches, take a moment not only to appreciate the beauty trees bring to our environment, but to acknowledge all they do for us.

The peak period of fall colors varies from year to year, depending on what Rajsky calls “a complex set of variables, including temperature and available moisture.”

Still, he figures it’s a pretty safe bet that the second week of October will be the best time to see Mother Nature in all her glory. What better way to appreciate the conservation efforts of these organizations than enjoying these habitats the way nature intended?