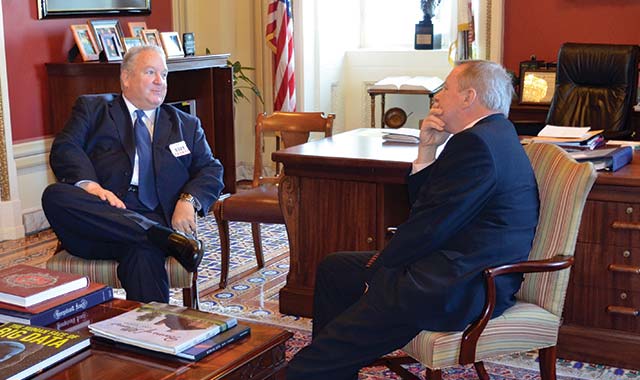 The relaxing and comfortable environment at this Rockford retirement center has stood out for half a century now. Find out what makes this Christian community special, and say hello to a current resident who was once employed here.

Lois Johnson spent five years working as an admission secretary at Fairhaven Christian Retirement Center, 3470 N. Alpine Road, Rockford. During that time, she saw how much love and nourishment the residents received from the staff.

Johnson liked Fairhaven so much that once she retired, she decided to make the retirement home her new place of residence. In fact, Johnson is one of nine residents currently living at Fairhaven who were employed there at one time.

“When I was working here, I saw how the staff interacted with the residents,” she says. “The staff is caring, they respond quickly and I know they treat the residents with plenty of care because both my mother and father were residents before I came here.”

The loving, comforting environment that the 200-plus full- and part-time staff members create is just one of the many reasons why Fairhaven is celebrating 50 years of service to residents and their families. For the past five decades, Fairhaven has allowed adults to enjoy a carefree lifestyle.

“Fairhaven has been successful in touching many lives, and we give the glory and credit to God for putting us and the residents here,” says Chris Hintzsche, director of marketing and resident services. “What we do here is because of Him.”

Fairhaven, which is affiliated with the Evangelical Free Church denomination, offers a lifetime of care for people ages 62 and up. Residents don’t need a faith background to call Fairhaven home. Almost 400 residents can enjoy a comfortable lifestyle in a safe environment.

Residents also have the opportunity to participate in a variety of activities such as choir, bell choir, picnics, musical performances, games and crafts, among other events.

First Free Rockford provides a weekly worship service on-site on Sunday mornings in the Sjostrom Center Chapel for residents who are interested.

Since Fairhaven is a continuing care retirement community, people can live at the facility for the remainder of their lives, says Hintzsche, who’s worked at Fairhaven for six years.

“If their future needs increase, they stay here,” Hintzsche says. “The fact that people can go from one level of care to another, should they need it temporarily or permanently depending on their situation, is really important.”

“The staff and residents have helped us thrive for so long,” Hintzsche says. “The staff members are always concerned about doing the best job they can to take care of the people who live here. Residents who live here appreciate what we’re able to provide for them, and their families embrace what we do.”

In her spare time, Johnson also plays the piano at Fairhaven, which creates calming and soothing tunes that can be heard throughout the building. She also plays at various programs and events at Fairhaven.

“I do it because God gave me this ability to play and I’m accountable to him for everything I do,” she says. “I’m accountable for what I’m doing with the gift he has given me in music.”

Johnson lived in Iowa for 10 years after she resigned from Fairhaven. Once it was time to retire with her husband, Bob, she knew where she wanted to be.

“I knew I’d be taken care of, and I know this place is kept clean,” says Johnson, who also spent 20 years as a secretary at First Evangelical Free Church in Rockford. “I’ve never seen a cleaning crew like this one. They’re always wiping the railings, cleaning the windows, vacuuming or polishing the organs. This is a very clean facility.”

The groundbreaking for Fairhaven took place on a cold, wintry day in December 1966. The facility was designed to be a residence for the retired, and it has become a caring community.

Concerned pastors and leaders of the Evangelical Free Church saw a need for a retirement home in the east part of Rockford.

The first Fairhaven building was a three-story, fireproof structure shaped like a semi-circle that held about 100 residents in single- and double-room apartments. The space also had nursing care for residents who needed medical attention. When the nursing care center first opened in 1972, there were only 23 beds. Today, there are 96.

The original Fairhaven building was officially dedicated on March 20, 1968. Due to increased demand, along with additional resident needs, Fairhaven slowly expanded over the years. An addition to the nursing center was attached in 1975, and multiple expansions of the main building and duplexes took place during the next few decades.

“We’ve been able to add, refurbish and grow based on the needs of the community,” Hintzsche says. “If we felt there was a service our residents needed or wanted, we’ve been able to upgrade and make those changes.”

In some cases, the residents of Fairhaven even took matters into their own hands.

One of those instances was the creation of Johnson Park, at the request of Axel Johnson, one of Fairhaven’s first residents. He saw a need for a picnic area, so he took it upon himself to clear away brush and small trees. He worked long hours to create a picnic area that resembled a small park. When his work was finally done, there was a place for a dozen benches, a wood-burning grill and a game of horseshoes.

Fellow residents John and Shirley Olson started maintaining the park in the ’90s and continued upkeep on it for the next 14 years. Among other things, they added new landscaping, created better drainage and planted hostas and bushes, which make the space a nice area to walk.

The residents also asked for a place to worship on site. In 2008, Fairhaven started a fundraising campaign to raise $1 million to build a chapel and multipurpose space. In 2010, the campaign had only raised $600,000. That’s when Geraldine Sjostrom stepped in. She inquired about living at Fairhaven and wanted to help create the chapel.

She pledged a paid-up investment that would pay Fairhaven more than $1 million on her passing. Her gift, coupled with other donations, resulted in the project being fully funded.

Being a successful retirement facility does come with its fair share of challenges. One thorn in Fairhaven’s side is unfunded mandates, Hintzsche says. Unfunded mandates require state and local entities to perform or implement certain actions without any new money to fulfill the requirements.

“The Illinois Department of Public Health is a governing body that has mandates, and we have to meet them,” Hintzsche explains. “For example, we are required to update the emergency procedures for a natural disaster. There have been mandates in terms of paperwork, education and things we need to put in place to show that we’re prepared in the event of a devastating emergency. It’s good for us, but there’s no funding for it and that’s what we’re going through right now.

“We have to go through the situation and how it would unfold,” she says. “It takes resources and money to make sure you’ve got things in place to be prepared.”

One of the big changes coming to Fairhaven is a change in leadership. Tom Bleed, the longtime executive director at Fairhaven, is retiring at the end of the year. He’ll be replaced by Jeff Reierson, the current assistant administrator.

“Jeff and Tom have both been here for 22 years,” Hintzsche says. “Our priority is making a smooth transition for our staff and residents.”

Hintzsche says Bleed will be missed at Fairhaven.

“He’s always looking for opportunities to make residents more comfortable, and he always has their needs as his top priority,” Hintzsche says. “He’s instrumental in making things happen for the residents. His mom also lives here in one of the duplexes.”

Earlier this year, the retirement center completed a major common-area renovation in the main building and in the health care building. The project, called First Impressions, consisted of various updates to the main facility such as a relocated guard desk, a decorative entry wall and a new café space. The project also includes lighting improvements.

In addition, the health center foyer entrance has new automatic sliding doors to make it easier for wheelchair-dependent people who come in and out of the building.

“We listened to the concerns of the residents,” Hintzsche says. “It’s helping us because we’re putting things in place that the residents are needing and wanting.”

Fairhaven means a lot to Hintzsche. She hopes the retirement community can continue to grow.

“I’ve worked in long-term care for 34 years and I’ve never been in a place like Fairhaven,” she says. “People want to be here, they want to care for the residents and everyone has the residents’ welfare as their top priority. It’s a great group of people whom I’ve been blessed to work with.”

Johnson echoes those sentiments. She’s been at Fairhaven as a resident for seven years now, and she’s excited to see what’s in store going forward.

“When non-residents come here, they’ve told me this place feels like a friendly, home-like, loving, caring atmosphere and that’s exactly what Fairhaven is,” she says. “I love this place.”