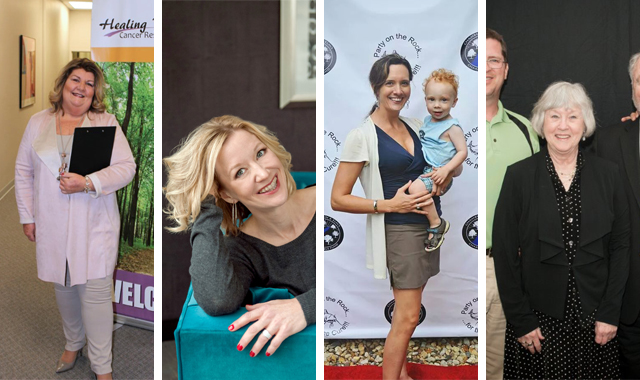 Meet Four Women Who Forged Ahead

Despite its time during a rocky period in the nation’s history, this family-owned company has persevered to become a flourishing local staple. Meet the owners behind this successful wine and spirit shop, and find out how they’re giving back to the community.

Anthony Artale had his first glass of wine at 10 years old.

“It’s pretty good, Dad!” he told his father as he slammed down his glass. His dad, Tony Artale Sr., had been working in wholesale wine and says his son slept really well that night. Little did he know that years down the road, he would be opening a wine and spirits shop alongside the miniature wine fan. Artale & Co., 6876 Spring Creek Road, Rockford, has been servicing the residents of Rockford since 2008.

It wasn’t the best time for the economy and many entrepreneurs would have been hesitant to launch a new business. With the stock market crash and the country in a fiscal mess, it probably didn’t seem like the wisest idea to open up a shop. But the Artale family simply felt that the time was right and there was a service missing in Rockford – high-end wines, craft beers and an educated staff to help guide customers. So, they decided to take the leap and fill the niche.

“A lot of people thought we were crazy to open up a higher-end wine store during that particular year,” Anthony says. “But it turned out to be a good decision.”

The shop was able to get help from the local community with projects like building shelves at an affordable price since residents badly needed work, Anthony adds. It took about a year for the shop to go from idea to fruition. But Anthony remembers nights in the first year or two of business when he would be sitting in the shop for hours with zero customers. He says it was “pretty rough,” particularly since Artale & Co. was the only business in its strip mall. But as time went on, word about the shop spread, and business slowly started to pick up steam.

“We started to get more involved in the community, and more businesses started to pop up in the area,” Anthony says. “We just kept growing.”

Before the shop opened, Anthony had been working in sales and bartending down in Florida. But he’d been around wine his whole life and wanted to share his passion with Rockford residents.

But it takes more than just interest in beverages to run a successful shop. The Artale & Co. staff prides itself on its continuing education and well-formed expertise. Anthony and his father have more than 50 years of combined experience in the world of wines. Anthony is an expert in Italian wines, even getting the chance to travel to Italy last year to learn more on the ground with certified sommeliers. Artale & Co. gets its beer expertise from Beer Director Aaron Sleger, who is an Advanced Cicerone, a level of certification in the expertise and understanding of beer.

Artale & Co. has become a staple in Rockford; serving beer, wine, spirits and snacks, the store is now celebrating its 10th anniversary as an important part of the Rockford community. Artale & Co. also offers in-store events like private and public tastings and wine classes to help people understand a bit better what’s in their glass.

When customers go to the shop, they aren’t always just looking to buy. They’re often in need of guidance and direction. People flock to the shop with dinner menus or specific tastes, but are entirely unsure which direction to go in, Anthony says. The store attracts people from all walks of life, meaning that no two people who walk into the store are at the same level when it comes to wine. That’s why Anthony sees his role as more of an educator than a salesperson.

“What we offer is knowledge about the products,” he says. “It’s hard for people to spend money on a product they have no idea about. But, we’re able to go to these wineries and breweries and sample everything. We’re able to then bring it back and translate it to our customer. It gives them confidence in what they’re buying.”

There’s something for all palates at the shop. With the changing seasons, Anthony says he’s specifically seeing a surging interest in bourbon and the latest shipments of Oktoberfest beers. The latest artisan cheese selections are doing well, too, and the knowledgeable staff can help interested customers find the perfect wine and cheese pairing for their book clubs or dinner parties.

The store has thousands of wine bottles in stock, and Anthony and his coworkers stay up-to-date on the latest beverages with blind taste tests, where they try to discern different wines simply by sipping.

“Over time, you get better and better at it. It’s one of the best parts of the job,” Anthony says.

But the shop does more than sell beverages – it also gives back. Tony Artale Sr. got the idea to partner with local nonprofits after seeing how charities were struggling during the recession. Nonprofits are able to send a representative to a wine-tasting event and take home part of the profits after getting a chance to speak about their missions. As members of the Rockford community support Artale & Co., the company is able to turn around and support the community right back.

Artale & Co. is hosting a 10th Anniversary Grand Tasting on Oct. 27. Whether you prefer white, red, or rosé, this booming shop will most likely have something to your taste. Making it to 10 years of business is quite an achievement, but Anthony says work often doesn’t feel like work.

“I think everybody who works here is super excited to come in every day,” he says. “It’s just fun to talk to people about wine. Interacting with everybody throughout the day – it’s just a fun thing to do. I love it.”