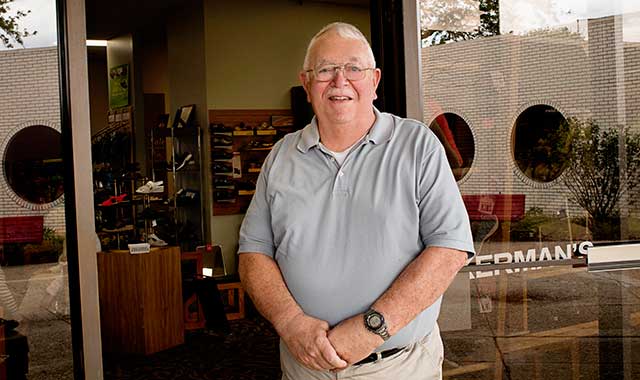 Judi Diamond brings energy and entertainment to the airways each morning. Say hello to this radio deejay and find out how the bumpy road she took to Rockford makes her appreciate the good things about our region.

Judi Diamond walks into a downtown Rockford restaurant wearing a black workout top, matching yoga pants and a headband to keep her auburn red hair in place. She’s 90 minutes away from taking a yoga class that will be held on the rooftop of The Standard, a downtown building overlooking the Rock River. She only started yoga a couple of months ago, but now is hooked. “I do it every day,” she says.

That’s how Diamond, the morning host of B103 for the past year, rolls. Whatever she gets involved with – from supporting a cause to taking up a new hobby – Diamond goes all out. As a St. Louis deejay, she once got a mammogram on the air to help raise awareness of breast cancer.

“She’s always up for anything,” says a former co-host who goes by the moniker Cornbread. “Judi has an open mind. Nothing with her is scripted.”

And that includes her love for Rockford, her adopted hometown. “When people say it’s a big little city, they’re right,” she says. “Even though I’m not from here, when people put it down, I defend it. When they talk about crime here, I tell them I lived in Los Angeles and St. Louis where there was plenty of crime. There is nothing to fear here. For every one bad thing people see, there are 20 great things going on in Rockford. I try to bring that out in my show.”

Diamond comes from an entertainment family. Her grandparents moved from England to Los Angeles where they worked in the entertainment industry, handling public relations for some of the biggest stars, including Frank Sinatra and Dorothy Lamour. Diamond’s parents, David and Rita, still call L.A. home.

Growing up, Diamond was a shy, but very curious girl with quite an imagination. When taking car trips with her family she’d make up stories about the people who lived in the homes they passed. Her favorite pastime remains sitting in airports just to people watch.

“I love people. I find them extremely fascinating,” she says.

At age 10, Diamond convinced her parents to let her take ballet classes as a start to pursing an acting career. As she got older, Diamond eventually found her way into commercial and voiceover work, including for McDonald’s, and she even wrote some for Comedy Central. A self-proclaimed horrible waitress, Diamond painted murals to help make ends meet.

But living in Los Angeles had run its course for Diamond. “I never fit in there,” she says. “I wasn’t blonde; I was a square peg in a round hole. It took me a long time to become comfortable in my own skin.”

So about 10 years ago, Diamond packed her bags and trekked across the country to St. Louis when her then-husband got a job there. In Missouri, she broke into radio, co-hosting the Cornbread Morning Show on WIL. “She always put her heart into every show,” says Cornbread. “She’s always happy. She’s one of those people you like being around.”

But the station was bought out, which left Diamond, now divorced, raising two young children, without a job. It was around that time that she met Kate Frisina-White, and the two came up with an idea to start a reality show about the everyday lives of mothers.

Diamond taught herself how to shoot and edit video. “It was the start of YouTube and podcasts,” she says. “We became the first mommy vloggers with our show called LipsticknLaundry. It was a show about being a real mom, not a perfect mom. I remember going to a PTA meeting and saying this isn’t me. We had a couple of million views but we weren’t making any money.”

Eventually, the show became “Mom Friends Forever” and was picked up by Viacom and aired on Nick Jr. The show followed Diamond and Frisina-White, who works at Trader Joe’s, and their busy lives. The show aired for 26 episodes over two years before the Nick Jr. channel was shut down.

“Judi was spunky, sensitive and funny as heck,” says Frisina-White. “When you do a show like we did, you learn a lot about each other. Sure, we fought about things like show topics, lighting angles, stupid stuff. But we always swallowed our pride and said ‘I’m sorry.’ We truly liked each other and I think that came across on the show.”

Out of work again, Diamond contemplated a move back to California. Her daughter, Shira, is there, attending law school, while her son, Leo, is in college in St. Louis studying to be a composer. Instead, Diamond got a call from a consultant with a job opportunity in an unlikely location – radio station 99.3 WAJK in sleepy LaSalle, Ill. “I always wanted to live in a small town,” she says. “I was there four months and had planned on staying.” That is, until Rockford and B103 came calling.

“I’m pretty loyal, but this was a chance to be creative,” she says. “I could have gotten another job in another big city doing milk-toast radio, but I’ve never cared about money. I just want to make someone’s day better. If you do that one day at a time, you can make a difference.”

Diamond hosts The Morning Buzz on B103, an adult contemporary station, from 6 to 10 a.m. Monday through Friday. She plays hits from the 80s and 90s, while sharing a few laughs with listeners. “Radio is more than just the music. It’s about bringing out the best in someone listening,” she says. “I try to put myself in their shoes. It’s all about connection and being authentic. It’s not my show. It belongs to the listeners. I’m just steering the wheel.”

While Diamond may have come to Rockford for a job, she says she has found a place to call home. She recently purchased a home in the River District and spends most of her free time exploring the city and meeting new people. She’s discovered City Market on Friday nights, the Peace Plaza (“I got the chills”), and the Boone County Historical Museum, not to mention the arts community and a number of authentic restaurants. She took part in a trivia night at a local church and, of course, there’s rooftop yoga on Thursday nights.

It should come as no surprise that Diamond has a gift to gab. She’s in radio, after all. In a 75-minute conversation, she covers a range of topics from old-school rap to details of her bucket list.

For example, Diamond doesn’t like sports talk radio but cried when the Cubs won the World Series after 108 years of futility, even though she was working in St. Louis Cardinals territory at the time. She asked her co-host, “Don’t you see the human side of this? Three generation of
fans were waiting 108 years for this.” And she adores Rockford IceHogs hockey. “The fans are rowdy and fun. I’d like to party with them,” she says. Her bucket list includes riding a Zamboni with mascot Hammy Hog.

“I’m fun-crazy,” she says, laughing. “So many people are self-centered. My goal is to be less self-centered and become more centered self. I deal in positivity. I want to bring people together. Maybe I can be a catalyst for change.” There’s little doubt she can.