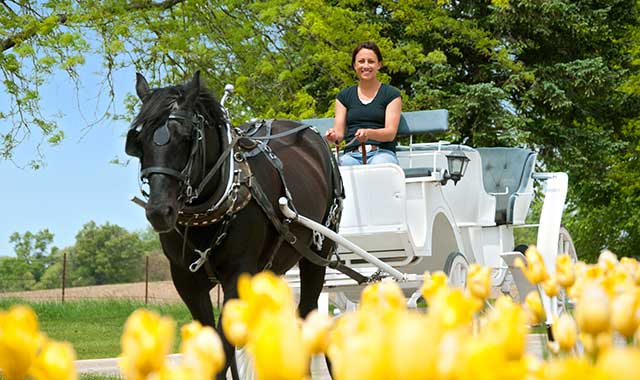 When looking for a place to rest during your weekend getaway, don’t settle for the ordinary, especially when these three Wisconsin beauties offer plush, unique accommodations – with all the pamperings.


When looking for a place to rest your weary head, Wisconsin has a distinct selection of stylish boutique hotels where you can rely on high thread-counts, personalized pampering and that famous Midwestern hospitality.
In proximity to multiple metropolitan areas, Beloit and Delafield, Wis., have passed the stage of up-and-coming trendy locations and have become known as burgeoning communities with much to offer.
Some of these communities’ best accommodations are owned by Hendricks Commercial Properties, which has led some impressive turnarounds on properties in the region. The firm’s boutique hotels promise luxurious amenities and experiences in a unique atmosphere.
In the heart of downtown Beloit you’ll find Ironworks Hotel and, come this August, Hotel Goodwin. About 65 miles northeast you’ll find the small city of Delafield, where the Delafield Hotel awaits.

The Ironworks Hotel is located at 500 Pleasant Street, in the heart of downtown Beloit. The luxurious touch is evident in Ironworks’ 54 guest rooms, including suites, the in-house restaurant Merrill & Houston’s Steak Joint, plus a slew of amenities like pet-friendly accommodations, a fitness center, access to nearby Beloit Club’s golf and entertainment venues, and access to the new Stateline YMCA as a member-for-a-stay – an exclusive perk of lodging at Ironworks Hotel.
Melding the past with the present, Ironworks Hotel’s goal is to create a high level of quality and uniqueness by having guests immersed in industrial-chic decor, an ambiance one might expect from a trendy hotel in New York City or Los Angeles. Wood, brick, leather and steel are accented with warm touches of seasonal florals, buttery candles and colored glass votives, creating a lobby that is both brawny and snug.
The hotel’s website features posts from guests using the hashtag #ironworkshotel. Find plenty of Instagrammable photo opportunities with backdrops such as the Rock River and Beloit skyline, as well as the much-appreciated personal touches that the hotel is known for giving its guests (such as dog treats from a local bakery for Ironworks’ four-legged visitors).
Creamy neutrals decorate the traditional rooms, while a wood-planked accent wall brings in the same rustic aesthetic found in the lobby. Suites have double-sided fireplaces and soaker tubs, along with a seating area and workstation. Luxurious details like the unique bathroom fixtures and exposed brick may make guests want to stay indoors, despite the variety of things to do outside the hotel.
Southeastern Wisconsin may not immediately come to mind when fantasizing about a chic weekend getaway, but Ironworks Hotel is a stone’s throw away from Beloit’s thriving entertainment scene and recreational opportunities.
In February, the Beloit International Film Festival (BIFF) descends upon the city, drawing lots of participants and viewers downtown. From May to October, the farmers market brings in crowds of thousands who peruse the artisanal goods of more than 85 vendors. Beckman Mill County Park is an idyllic slice of Americana, with a gift shop, working mill, an 1840s cooperage, a blacksmith and nature trails. Local wineries and restaurants ranging from casual to upscale can be found all over town.

Rob Gerbitz, President and CEO of Hendricks Commercial Properties, says Beloit’s booming tech industry was a driving force when deciding to design and start construction on Hotel Goodwin.
“With industry investors and innovators coming from all over the world to do business in Beloit, the hope was to create more space for people to stay,” he says.
With Ironworks Hotel doing so well and maintaining high occupancy rates year-round, Hendricks Commercial Properties is slated to open a second boutique hotel this August, just across the street, at 500 Public Ave., Gerbitz says.
Hotel Goodwin will be different from Ironworks Hotel in aesthetics, but similar in its comforts and congeniality, Gerbitz says. Like Ironworks, the vibe will be “steeped in history, but more classic, with clean lines and textures.”
“It will be an extremely comfortable and fun hotel, with a down-to-earth restaurant,” Gerbitz says.
While Ironworks Hotel has the classic steakhouse of Merrill & Houston’s, with its rustic vibe and quality selection of steaks and seafood, Hotel Goodwin’s restaurant, The Velvet Buffalo, will be heavily wine-centric. Its specialty is reflected in its name, as velvet is the term for a perfect pour of red wine, while the buffalo refers to an Italian cheese delicacy, buffalo mozzarella.
At the moment, the restaurant is slated to serve smaller plates, though different from the tapas fare people may be familiar with.
“Comfort foods cooked in a wood fire oven,” Gerbitz explains. “There’s nothing in Beloit like it.”
The guest rooms will be slightly smaller than those at the Ironworks Hotel, but they’ll still have luxurious, high-end amenities inside them. The hotel designers are researching the latest technology items desired by today’s hotel guests, Gerbitz says. There will also be event space, including a meeting room with a rooftop deck. Not to forget, Hotel Goodwin will also be pet friendly.

About 65 miles northeast of Beloit, Hendricks has yet another boutique property. The Delafield Hotel opened in 2006 and was purchased by Hendricks in June 2015. Renovations began immediately and were complete in the fall of 2016. Staying open and operative during renovations was a quite an experience, says General Manager Erin McDonald.
McDonald has been at the Delafield Hotel for more than five years, moving up the ranks to general manager from the sales and catering side of hospitality.
“Managing the property while it underwent refurbishment was an opportunity to learn and to transition into my new role as the hotel transformed into what it is today,” she says.
From the outside, the colonial building looks historical, though built in 1995. Before the renovation, there was an archival, antique vibe. The rooms in the all-suite hotel now have a modern feel. Cool grays and crisp whites adorn the walls, linens and furniture. Luxurious touches typical of a Hendricks property warm the place, adding comfort with plush leathers, soft rugs and textured accent pieces. The website touts a “signature blend of cozy and contemporary, cool yet comfortable.”
The hotel has 38 rooms that are spread out across two floors. Each spacious suite has a unique layout, some featuring a separate living area in each suite, McDonald says. Bathrooms are outfitted with Kohler Rain Showers and Spa Tubs to ensure maximum pampering.
The hotel sees many weekday business travelers and couples on weekend getaways, as well as wedding guests, since the Delafield is a picturesque spot to hold a wedding or reception. The typical guest of the Delafield Hotel is, according to McDonald, “someone who appreciates quality and an overall experience versus someplace to just rest your head.”
The Delafield Hotel is also home to I.d., a restaurant open daily with a full bar and lounge, live music on occasion and Sunday brunch. “Randomly inspired” is the restaurant’s theme.
“It’s funky, yet casual, with high-end service and cuisine,” McDonald says. “It’s approachable for everyone.”
The American fare relies heavily on local and seasonal ingredients and is cooked in the restaurant’s open kitchen.
The hotel also features a “Randomly Inspired” room package, which is available on Fridays in the winter months, offering guests an overnight experience including a $50 gift card to dine and imbibe at I.d. The Romance or Valentine’s Day Packages are perfect for couples looking to revel in some quality time. The Room Service Relaxation Package allows guests to “unwind in elegance” with customized in-room massage services. Also available is the Top Dog Package, with locally made treats, a personalized doggy door hanger, a comfy pet bed, food and water bowls, and of course, a pet mini-bar and a copy of “Fetch” magazine if Fido may want to catch up on his reading.