Real Furniture, Made the Amish Way

Today, more than ever, man’s best friend has become an integral part of our families, jobs and health. Take a look at some of the ways in which we put dogs to work, such as policing, therapy and service. 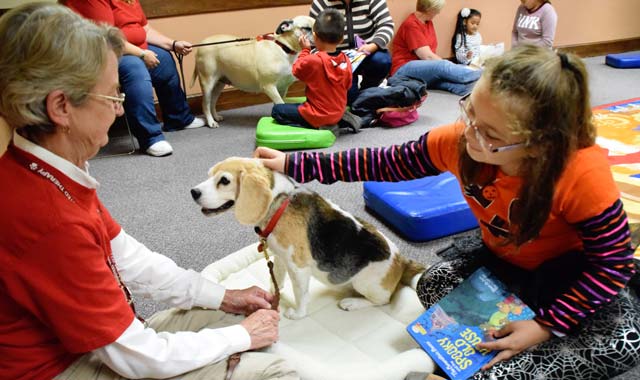 Ever since the first wolf came in from the cold to a human’s fire, people and dogs have shared a special relationship. This long association has made dogs uniquely attendant to human behavior, and has made it possible to train them to be important partners in our lives. Selective breeding has created dozens of dog types especially suited for performing unique tasks and fulfilling specialized roles in our society.

One group of dogs we’ve probably all seen demonstrating their special skills is the canine units (K-9) of local law enforcement agencies. Both the Rockford Police and the Winnebago County Sheriff’s Office have such units, and they often “show their stuff” at public events such as neighborhood watch picnics or county fairs.
The Winnebago County Canine Unit is assigned to the Uniform Services Division and currently consists of five handlers and their dogs.
Each team attends a 10-week training academy at the Illinois State Police Canine Training Center in Springfield, Ill., to become certified. They must re-qualify in each area of training annually, and train at least 16 hours per month to maintain their efficiency, but in reality the training never stops.
The patrol canines are considered dual-purpose dogs and are trained in narcotics detection, tracking, searches and apprehension work. The Sheriff’s unit averages around 75 deployments per month. Since each dog lives with its handler, the job is a 24/7 commitment.
“Most people don’t realize the amount of time and commitment required to do this work,” says Sgt. Nick Cunningham. “In our department, everybody works a 12-hour shift. But when a patrolman comes home after his shift, he’s done for the day. These K-9 handlers must get up two hours before their shift to feed the dog and let his stomach settle. When they get home, they must wait two hours after their shift to settle his stomach before feeding him again. And these dogs have so much energy, you have to do something with them every day, no days off.”
Deputy Steve Martellaro has been on the Sheriff’s force for more than four years, the last year-and-a-half as part of the K-9 unit. His “partner” is a three-year old Belgian Malinois named Bullet, a bundle of canine energy eager to work and please his handler.
“Before I went through training with Bullet, I observed other officers with their dogs,” says Martellaro. “I was also trained in ‘decoy,’ where I wore the bite suit or the bite sleeve, while other dogs attacked me. I had to learn how to take bites and prevent injuries to the dog.”
According to Martellaro, the most difficult part of working with a K-9 unit is tracking.
“It’s all about reading your dog, understanding what he’s showing you,” he says. “We give the command to track, then look for unconditional changes in his behavior. When he’s on track, his ears are up, tail straight and not wagging, his mouth closed. When he loses the track, his head comes up, his tail curls, and he starts looking around.”
When tracking, Martellaro has Bullet on a 30-foot lead, always within the officer’s control. He’s often called upon to track armed suspects who are fleeing arrest. So far this year nationwide, seven K-9 dogs have been killed while pursuing armed assailants, none of them in Winnebago County.
“We had one guy try to punch out the dog that was chasing him, but the dog bit his fist in midair,” says Cunningham. “Most of the time, they give up when they hear the dog coming. We also occasionally find lost children or elderly people who have wandered off.”
Although several breeds have been used for K-9 work, such as German Shepherds and Pit Bulls, Belgian Malinois are particularly well-suited for this job.
“They have a high energy level and great commitment to the work,” says Cunningham. “They’re also well-rounded, since they can both track and fight, and they handle the stress well. They just won’t give up. We say this work is 80 percent dog and 20 percent handler.”

A therapy dog is trained to provide affection and comfort to people in hospitals, nursing homes, schools and hospices. Its primary job is to allow strangers of all ages to make physical contact with it. Patience, confidence and gentleness are important characteristics of good therapy dogs.
All three Rockford hospitals have therapy dog programs in place. The program at OSF Saint Anthony Medical Center is called Paws for Healing. Formed in 2008, it has grown to a group of more than 45 dogs and their handlers, many of whom have volunteered for five years or more.
Dog qualifications for the program include up-to-date vaccinations, obedience proficiency and ability to handle stress without anxiety. Handlers must be at least 18 years old, have friendly dispositions and good communication skills, and must be able to work two 2-hour shifts per month. Applications and procedures are available at osfsaintanthony.org.
For the past 15 years, Ida Public Library in Belvidere has hosted a Latino outreach reading program for children between ages 3 and 7. The kids meet every Friday evening from 6:30 to 7:30 p.m. Twice a year for the past three years, OSF’s therapy dogs have visited the reading program, and the kids, one at a time, have read to the dogs. This event is called Reading is a DOGgone Good Time.
“It’s one of our best-attended programs of the whole year,” says Maria Lopez, program coordinator at Ida Library. “People ask me all the time, ‘When are the dogs coming back!’”