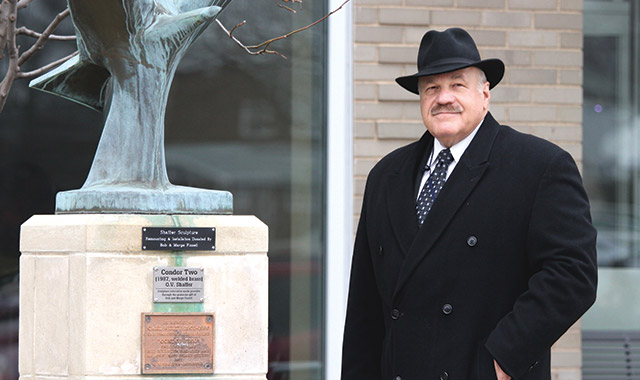 Why We Love Our Region – Part 2

A longtime face in the region’s car dealing business is making his debut in Beloit. See how George Shaffner landed his latest gig, and why it’s a perfect fit to be with a family-owned company that separates itself from the competition.


Since 2000, George Schaffner has held the same title: general manager. But this past August, the scene changed.
After 23 years at Saturn of Rockford, and seven more at Lou Bachrodt in Cherry Valley, Ill., Schaffner joined the Bryden Motors family in Beloit.
With his vast experience leading dealerships, one would think it was a simple plug-and-play situation. Not so, says Schaffner.
“Nothing is ever same-thing-different-address in any business,” he says. “Every facility is unique.”
But this one was uniquely ideal for Schaffner.
“The Bryden family matches what my core is,” he says. “They’re firmly based in the community and have been here more than 72 years. It’s a family-run business founded on strong values, which are trust and respect of the individuals, continuous improvement and community involvement.”
It was an obvious fit.
“My previous employer wanted to make a change,” Schaffner says. “I was no longer a fit. It gave me a chance to look at what I wanted to do next. Then this door opened. They asked me to come on board and it was really the only option I considered.”
And, while Bryden Motors was the right fit for Schaffner, he was also the right fit for Bryden Motors.
“We’ve known George for many years, and the time was right,” says Christine Bryden-Lawver, a third-generation member of the Bryden family who serves on the board of directors as secretary and treasurer. “He has a lot of energy and knowledge about the car business and I thought we could really benefit from that. And, his overall friendliness was a factor, too. Our dealership is known for being friendly and he fits right in there.”
The next step was getting acclimated. While Schaffner says “every facility is unique,” his approach hasn’t changed.
“Any good leader doesn’t come in right away and make changes,” he says. “You have to learn what their processes are, what makes them work, how they do business. It’s not one-size-fits-all.”
Over the first three weeks, he spent time learning the lay of the land – most importantly, the personnel. He took time to meet every employee, and those one-on-ones featured four basic questions:

Most answers were work-related. But, some also talked about personal goals and aspirations. It gave Schaffner a closer relationship with his employees, which he believes is the key to strong management.
Then, to cap it off, he asked every employee to pull out their cellphones and type in his personal number.
It’s a management style built on lessons learned.
“I’ve been in the car business more than 40 years, and I’ve worked for a lot of people, some good, some not so good,” Schaffner says. “One thing I always told myself is that I would never make the same mistakes I saw if I were ever in charge.
“I’ve put a lot of that into my notebook over the years,” Schaffner adds. “I’ve learned from both the good and bad leaders. It’s given me a degree in what’s the right way to do things.”
Schaffner believes the relationship between boss and employee is the most crucial aspect of a successful business.
“I told them I would trust them right out of the gate, but I know that I still have to earn their trust,” he says. So, every morning, he makes it a point to say hello and talk with his employees.
“I want them to know that everybody has some skin in the game,” he says.
The next focus was on the business itself.
“There is a tremendous team here,” Schaffner says. “There is nothing wrong with this place at all. But, they want to grow and expand, which I can help them with.”
First and foremost is the basics: selling cars. And, over the years, that has changed with the introduction of the internet. Before, customers would be limited to price shopping among only nearby dealerships. Now, they can get a sense of what is a good deal from businesses many miles away.
“The car business hasn’t changed much since the beginning,” Schaffner says. “What has changed is that people are coming with more information than they ever have before. Studies say people have done between 12 and 16 hours of research before they come in. And the buyer visits 1.2 dealerships before they buy a car. We have to embrace that we have two front doors: the physical front door, and the electronic front door. We have to man both of them to give guests a reason to come in.”
That’s why Schaffner emphasizes the buying experience.
“You can buy a good car anywhere, but you can’t buy a good car from good people anywhere,” he says. “You can at Bryden Motors. The car business is so much more than just price. Anybody can beat anybody with the click of a mouse. So, you have to build value. There are dealers who do some deceptive advertising, but we won’t do that. You can’t bring guests through the door with deception and then try to give them a great experience. When the value outweighs the price, that’s when you get raving fans, enthusiastic customers and loyalty. It’s about the experience you’re having not only during, but after your purchase.”
Schaffner’s other focus is the growth and long-term success of Bryden Motors.
“This year we have added to our Ram brand,” says Christine Bryden-Lawver. “We are now a business link dealer that includes heavy-duty Ram trucks and ProMaster vans. We are proud to be able to sell and service these vehicles for any business. We’re also adding heavy-duty lifts to our service department. We’re excited for more expansion coming in 2018.
“We just want to keep growing our business.,” Bryden-Lawver continues. “And George is a great addition because he has the same vision we have. And, he’s very enthusiastic about where we’re going.”
“I want to take them to the next level,” Schaffner says. “They need some site management and they want to grow some of the properties, including the service department, to handle more customers. And, we need to grow the sales department. What I hope to do is help with the growth and development and to consolidate some of the properties and make them more useable together. So, my objective is to help them get to the next level and also to train my replacement.”
Bryden Motors started more than 70 years ago with original owner Bill Bryden, who passed the company to his son Roger, who ran the business until his death in 2014. Roger’s wife, Vicki, took on management duties in the later years of Roger’s life and is now the owner. Their son, Scott, is the president and dealer principal. And daughter Christine performs many tasks including advertising, check signing and employee relations. It’s a family business from the past to the present.
And, maybe the future as well.
“My son is in the parts department,” Christine says, “so the next generation is coming up.”
But, until then, it’s Schaffner who is bridging the gap.
“This is what I do,” he says, “and this is what I love.”