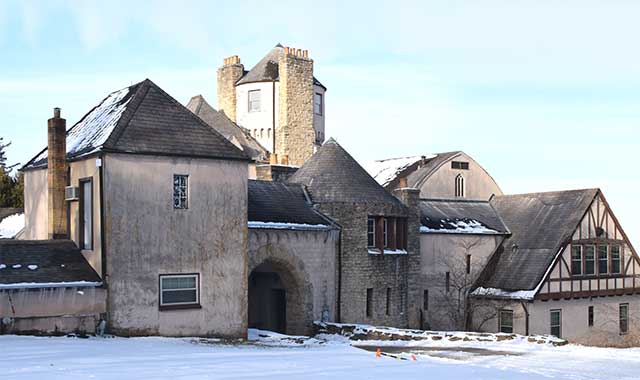 A New Chapter for Stronghold Castle

Sometimes it’s the wonders in our own backyard that most elude us. Learn how, and why, you should take the time to explore the hilly land, deep valleys and gushing streams of the Driftless Area.

The glaciers left a crushing effect on the Midwest. They bowled over the land, leaving it flat.
However, there’s a spot the glaciers left untouched. Dan Bertalan, a geologist, and Rob Nelson, a biologist and filmmaker, created a whole documentary about it called “Mysteries of the Driftless.”
“What if I was to tell you there is a place in this country that’s huge, and 99.5 percent of Americans have no idea that it even exists?” Nelson says in the documentary. “And, what if I was to tell you that most of the people that actually live there don’t know they’re living in a really special spot?”
This special spot is called the Driftless Area. It covers four states – Iowa, Wisconsin, Illinois and Minnesota – but the majority of this geological wonder lies in southwest Wisconsin.
The glaciers avoided this area completely, resulting in the beautiful landscape seen today.
“It’s geologically and biologically amazing,” Nelson adds. “And, from a historical perspective, Native Americans used this place as a sacred meeting ground for ages. And, while they’ve left their mark, it’s all but almost been forgotten.”
For many reasons, the Driftless Area is one of our region’s best treasures worth exploring.

From an aesthetic standpoint, the Driftless Area is a beautiful rolling landscape. The hilly lands, deep valleys and gushing streams are unique to the area.
Travel any direction away from the Driftless Area, and the landscape becomes flat again.
“It’s a topographical island,” says David Clutter, executive director of the Driftless Area Land Conservancy. “The area is unlike anything else you’ll see around it.”
So, how did this area form geologically?
First, it’s important to understand what “driftless” actually means. Glacial drift is the rock, sand and clay that the glaciers pushed across the land. The majority of our landscape is full of glacial drift.
However, the Driftless Area is exactly that – driftless. Due to unique geographic conditions, the continental glaciers that scraped most of the upper Midwest over the past 2 million years failed to cut across the Driftless Area. Therefore, they never left any glacial drift behind.
“The Driftless Area is an old, erosional landscape that supports very unique natural communities and features,” Clutter explains.
The unique features of the Driftless Area are indicative of karst topography and a landscape dominated by towering limestone outcrops, steep cliffs and deeply carved valleys, Clutter adds. Karst topography formed when rainfall dissolved the region’s soluble limestone over time.
“Water got through the cracks in the limestone, which lead to some incredible natural features,” Clutter says.
Sinkholes, caves and springs are just some of these natural features. And everything is connected. Water in sinkholes can lead into caves, which can lead into springs. These natural features are beautiful to explore.

A drop of water can start in a sinkhole, flow through a cave, and eventually pop out of a spring.
Sinkholes: Rainwater falls and erodes the limestone bedrock of the Driftless Area. With no glacial drift – no clay, sand or gravel to provide a protective, permeable layer – the ground surface slowly begins to sag as the limestone underneath dissolves. Suddenly, there’s not enough support, and the ground collapses. This process can happen as quickly as overnight.
Caves: Water from a sinkhole can lead into a cave. Many caves are scattered throughout the Driftless Area, and no two caves are alike.
Since the limestone bedrock is easy to dissolve, eventually there’s enough water underground to form small streams. Over time, these streams can grow into rivers, which can carve out paths into the limestone, much the same way a river above ground can carve out canyons.
Springs: Water from a cave often resurfaces in a spring, which is simply water gushing out of the earth.

The abundant wildlife found in the Driftless Area is as diverse as the geography.
“When you have a diverse topographic landscape, you’re going to have a diverse representation of wildlife,” Clutter says.
Many endangered species call the Driftless Area home, such as the whooping crane and Massasauga rattlesnake. Yes, rattlesnakes live in the Midwest. They tend to nest along the bluffs of the Mississippi River, which flows through the Driftless Area.
Near-threatened species, such as the red-headed woodpecker, are also found in the Driftless Area. Even Pleistocene snails, a remnant from the most recent Ice Age, live in this hotspot of diverse ecosystems. Northern monkshood, a deadly plant, is also an Ice Age survivor found in this region.
“The unique geography is what enables these endangered and threatened species to thrive here,” Clutter says. “Historically, we also used to have elk, black bear, cougar and wolves, which have been extirpated, but, occasionally, we’ll see a wolf or a young mountain lion come long distances back through this region.”
The Driftless Area is especially known for its healthy population of brook trout. Thanks to the many springs, creeks and streams, this freshwater fish is abundant throughout the region.
“People come from all over the United States, and even the world, to fish for these little brookies,” Clutter says. “It’s all based on the abundance of our cold-water streams.”

Activities in the Driftless Area

Besides fishing for trout, people can engage with the undulating land in many ways.
“Motorcycle enthusiasts love riding through the Driftless Area because of its winding roads and hills,” Clutter says. “Similarly, there are a lot of bicyclists who come out here.”
Ironman Wisconsin, a classic triathlon event, partially occurs in the Driftless Area every year. The steep hills make for a great area to train. The land also provides ideal terrain for skiing, snowshoeing, hiking and backpacking.
Currently, Clutter’s organization, the Driftless Area Land Conservancy, is working on creating a 50-mile backpacking trail that connects three state parks in southwest Wisconsin.
“We closed on our first couple of easements last year, and we anticipate that the trail project will be completed within 15 years,” he says.
Canoeing and kayaking on the 126-mile long Kickapoo River, or the meandering Pecatonica River, is a draw for many out-of-town visitors, Clutter adds. The Wisconsin and Mississippi Rivers cut through the Driftless Area, making the region a popular place for boating, hunting and fishing.
Bird enthusiasts flock to the Driftless Area every autumn, when up to 3,000 sandhill cranes stage on islands along the Wisconsin River before flying south. Deer hunting is also common in the fall, while spring is prime turkey-hunting season.
“It’s a diverse area with diverse opportunities,” Clutter says.

The Driftless Area Land Conservancy’s mission is to maintain and enhance the health, beauty and diversity of southwest Wisconsin’s driftless area, and connect people to the land and to each other.
“Land protection is the core of our work, but connecting people to the land is a true joy,” Clutter says.
The Conservancy acquires land through purchase and donation. Clutter and his team actively manage the acquired land for biodiversity.
For example, by working with the National Fish and Wildlife Foundation and the U.S. Fish and Wildlife Service, the Conservancy is currently protecting monarch butterflies – a species in decline.
“We work with private landowners on getting these nectar plants on the ground,” Clutter says. “This helps sustain monarchs – one of the most beautiful creatures in the world.”
In addition to protecting and managing the land throughout southwest Wisconsin’s driftless area, the Conservancy creates educational programs and field trips for the public to enjoy.
“We really try to engage kids and seniors in particular,” Clutter says. “We’re working with schools to develop curriculum and get kids outdoors and exposed to nature. These are the conservationists of the future. We’re also working with seniors, many of whom live in nursing homes, and may not have the opportunity to get outdoors. So, we get them outdoors, or at least bring programming to them that they might enjoy.”

Life on the Land

More and more often, people living in the Driftless Area are vowing to protect their land from development and maintain their land’s biodiversity.
Nan Fey is one such individual. Her 147 acres are just north of Governor Dodge State Park, in Iowa County. Last year, she decided to protect her land with the Driftless Area Land Conservancy. She wanted to make sure the area stayed habitable for diverse ecosystems long into the future.
“Basically, I have a legal agreement with the Conservancy that describes how my land is to be used and not used,” Fey says. “It protects the land forever. I’ve given the Conservancy responsibility for monitoring the land and making sure it’s properly used, and that no development ever occurs on the land. Now, no matter who owns this property, the Conservancy will assure its long-term protection. Any future buyer knows these restrictions.”
Fey’s parents were good friends with the famous Aldo Leopold, an ecologist, conservationist and environmentalist known for the idea of “land ethic,” which calls for an ethical, caring relationship between people and nature.
The friendship affected Fey’s thoughts on conservation.
“I learned to pay attention to the natural world and respect its integrity,” she says. “I think it’s important to protect certain areas from urban development as our population grows. It’s restorative to spend time in the woods.”
Richard Cates also owns about 100 acres of land in Iowa County with his wife, Kim, his daughter, Shannon, and his son-in-law, Dan. The family lives just two miles away from the Taliesin Estate, the home of famous architect Frank Lloyd Wright, whose architecture is inspired by the Driftless Area.
Richard bought the land in July 2015, and, in partnership with the seller, Ted Ross, protected it with the Conservancy. The Cates family allows visitors to recreationally use their land for trout fishing, hiking and bird watching.
“Since we are a working farm, it’s important for us to be able to use the land for managed grazing,” Richard says. “We work with the Conservancy to move the livestock rapidly across the land; we never let them stay in one place more than a day or two. That helps keep the grass from getting too short, which helps to keep soil nutrients out of streams, which protects the water quality.”
As an ecology professor at the University of Wisconsin-Madison, Richard is able to integrate his values into his lesson plans. He teaches his students about managed grazing, business planning for new farmers and protecting grassland.
“I think landowners should protect their land to the best of their abilities,” Richard says. “It’s one of my strongest beliefs. Especially in the Driftless Area, which is truly something special.”