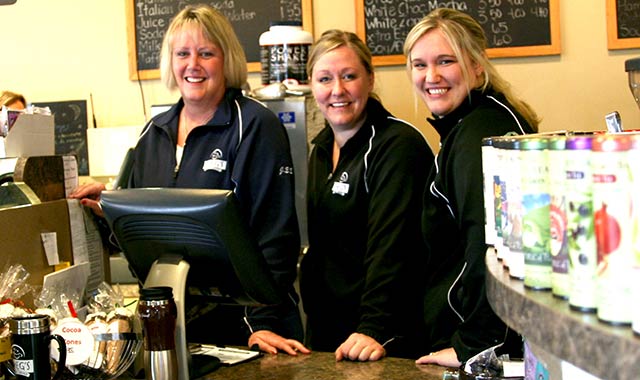 What’s a community to do when its level of college attainment is low, but the local economy demands an education? Meet a group that’s seeking to transform the region through this promising scholarship.


Alondra Torres dreams of becoming a pediatric oncologist. It’s a tough road ahead, and one that can feel daunting to someone from a low-income background.
But thanks to an innovative new scholarship, this Rockford University freshman is now traveling a far more certain road.
Last year, Torres was one of five Rockford Public Schools graduates to receive the Rockford Promise scholarship, which is aimed at low-income families and provides a nearly full ride to either Rock Valley College or Rockford University.
“This gives me the opportunity to save my money. Because my goal is to be an oncologist, and it takes a lot of schooling, this means I won’t have to spend as much money or work a lot on the side,” says Torres, who was born in the U.S., the daughter of Mexican immigrants.
So far, Torres is thriving on campus. “She has participated in extracurricular activities, she helped us out on our soccer team and has joined several clubs,” says Dr. Karen Walker, Torres’ scholarship liaison and the university’s director of student success and retention. “In the first semester, we had 25 international students visit from Mexico and she engaged with that group, too. She’s been a great example of an all-around good student.”
Just as Rockford Promise is transforming Torres’ life, this scholarship is helping to transform our region. In its effort to create a strategic plan for Rockford’s self-improvement, the nonprofit Transform Rockford has identified some 65 projects, including Rockford Promise, that have the ability to radically reshape our region. Many are the product of three years’ worth of volunteer-led roadmapping, research and strategizing.
Rockford Promise isn’t new to the area, but it’s been re-energized thanks to support from Transform Rockford leaders like the Rev. Dr. Matthew Johnson, a Promise board member and senior minister at Rockford’s Unitarian Universalist church.
“The hope is to raise grants, donations and other funding streams so that we can make this available, someday, to every student in Rockford Public Schools,” says Johnson. “We want to guarantee that, if you want to go, you can go to college. That’s why it’s called a Promise.”
The scholarship is based on a concept launched in Kalamazoo, Mich., that supports low-income students at 15 state universities. Last year, five Rockford-area students received a Rockford Promise scholarship. Johnson expects 10 more students to receive one next year.
Rockford Promise covers tuition in combination with state and federal grants, community scholarships and school contributions. It doesn’t, however, reduce the cost of tuition. Making all colleges affordable and accessible to young people is important to Walker, but she recognizes it’s a double-edged sword.
“I think this is a conversation that needs to be at the table, but I think we have to be creative in our solutions,” she says. “We have to be able to recognize that this is a tuition-funded university. We must also look at the challenges Rock Valley College is having with the state budget impasse. We need to get creative in how we finance higher education.”
It’s an important priority for Bob Guirl, too. Formerly the director of UTC Aerospace Systems in Rockford, Guirl now is an independent education consultant. He chairs Alignment Rockford and leads Transform Rockford’s education team.
“One of the challenges we have in Rockford is an achievement gap for students in poverty,” says Guirl. “For families who never sent a student to college – let alone had someone who graduated from high school – if we can break that cycle and offer opportunities for attending college, that has the chance to move the needle of success.”
After three decades in engineering, Guirl recognizes how Rockford’s low educational attainment statistic poses a challenge.
“The region doesn’t produce enough college graduates to meet the demand for college degrees in the area,” says Guirl. “The supply of bachelor-degreed candidates is below 20 percent, but the need is greater than 25 percent – just to sustain our current economy – and more like 35 percent to expand and grow.”
Walker recognizes the economic benefits that come with an education, like higher incomes. She also knows how college expands one’s world.
“There’s a proverb that talks about transformation by the renewal of your mind, and college is truly a renewing of your mind,” she says. “It’s a transformation not just for the individual but for their families as well.”
Torres’ success as a Rockford Promise scholar is a daily reminder for her two sisters and parents. “I want to show my family what I can do, and prove to them that my parents’ leaving everything behind gave me far better opportunities,” says Torres.
For more information, visit TransformRockford.org and RockfordPromise.org.
Tags: raedc rock valley college rockford rockford promise rockford public schools rockford university Transform transform rockford
Share on
Share on Facebook Share on Twitter Share on Pinterest Share on Email
Chris Linden March 30, 2017