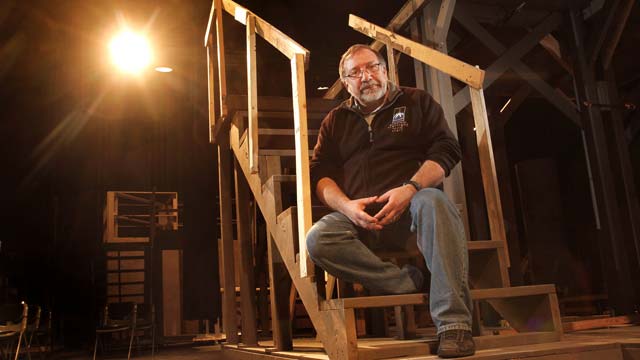 Mike Webb Gets On with the Show

Discover how this longtime Rockford favorite honors the region’s Scandinavian ancestors, and why its traditions continue to endure.


Great food, at a fair price, in a friendly setting, is the first thing to know about Stockholm Inn, 2420 Charles St.
The second thing is that this restaurant honors Rockford’s Scandinavian ancestors with its food, ambiance and philosophy. It still uses many recipes developed in the 1940s, when the late Alf Carlson and his wife, Virginia, founded it at as the Brad-Lynn, named for their children.
Alf’s ancestry was Swedish, Virginia’s Norwegian. The couple drew heavily from family cooking traditions rooted in Scandinavia. Subsequent caring owners treasured those recipes, added to them and carried them forward, and renamed the restaurant after the capital city of Sweden.
Today the restaurant is owned by The Lingonberry Group, a group of investors who believe in the cultural and historical value of The Stockholm Inn.
“We constantly monitor the food for quality and we make sure that pricing remains moderate,” says Denny Johnson, a co-owner who has fond memories of the place from his childhood. “We want to protect the Stockholm Inn as a family-oriented restaurant known for high-quality food that’s affordable. We could get a license to sell beer and wine, make a lot more money, but we prefer to keep it as a family place. It’s part of our philosophy.”
To this day, lunch and dinner specialties like Swedish meatballs, Swedish pea soup, salmon loaf, kroppkakor (potato dumplings), kaldomar (cabbage rolls), salt herring and Swedish fruit soup, rice pudding and nut cake are prepared fresh in the Stockholm Inn kitchen.
But there’s also spaghetti marinara and fettucini Alfredo; Swiss steak; Belgian waffles; French dips and Reubens. There are meat/poultry/seafood entrees like smoked ham or fried chicken, and American diner favorites like burgers, liver & onions, meatloaf and classic salads and sandwiches. The potato chips are made in-house; soups are made from scratch; the orange juice is freshly squeezed.
Breakfasts are as simple or as sumptuous as you’d like, with every classic dish imaginable, plus proprietary favorites like egg- or potato-bake casseroles, korv (potato sausage) and, of course, Swedish pancakes with lingonberry sauce. The giant cinnamon rolls are home-baked, as are many other treats, like cardamom bread, which is sold in the Stockholm Inn gift store.
In 1976, John and Elayne Bilka purchased Stockholm Inn and grew it to double its capacity, relocating it to the present address in 1996. After 25 years, they sold it to The Lingonberry Group. John Anderson and Steve Sjogren are principal owners, along with Johnson. The long list of smaller investors includes local politicians, business leaders, restaurateurs and even the band Cheap Trick.
When the Lingonberry Group took ownership in 2001, it expanded Stockholm Inn both east and west, as property became available in the Rockford Plaza Shopping Center. Johnson and wife Evelyn traveled with others to Stockholm, Sweden, to acquire photos and visit the home of famous Swedish artist Carl Larsson (1853-1919), whose cheerful work inspires the restaurant décor. They transformed photos of scenery and Larsson’s artwork into custom wallpaper coverings for the restaurant’s Larsson rooms, which accommodate groups, large and small, for family, social or corporate events and meetings. The restaurant also caters.
Swedish royalty has dined here, and Stockholm Inn is a regular stop for many tourists. Its Trip Advisor rating is No. 2 out of 286, and it’s one of two Rockford restaurants to receive the Delicious Destination Award from the Illinois Office of Tourism; the other is Lino’s.
Stockholm Inn seats 650 people. On weekends, it serves 2,500 to 3,000 people; it serves more than 8,000 each week. On holidays, reservations are a must.
“We have people reserving tables a year ahead for Thanksgiving, Christmas Eve, Mother’s Day,” says Johnson. “It’s more than just a restaurant, for a lot of people. It’s community. We have people who come here every single day, who eat every meal here.”
Stockholm Inn serves breakfast, lunch and dinner. Hours are Mon.-Thurs. 7 a.m. to 7 p.m., Fri.-Sat. 7 a.m. to 8 p.m., and Sunday breakfast only, 7 a.m.-2 p.m. There’s a breakfast buffet on Sat. (8 a.m.-1 p.m.) and Sun. (8 a.m.-2 p.m.) and a Saturday night buffet from 4-8 p.m. Check the website or call (815) 397-3534 to learn about live music and other special events, as well as daily specials.
Tags: dining dining profile restaurant rockford stockholm inn swedish The Lingonberry Group
Share on
Share on Facebook Share on Twitter Share on Pinterest Share on Email
Janine Pumilia January 13, 2017