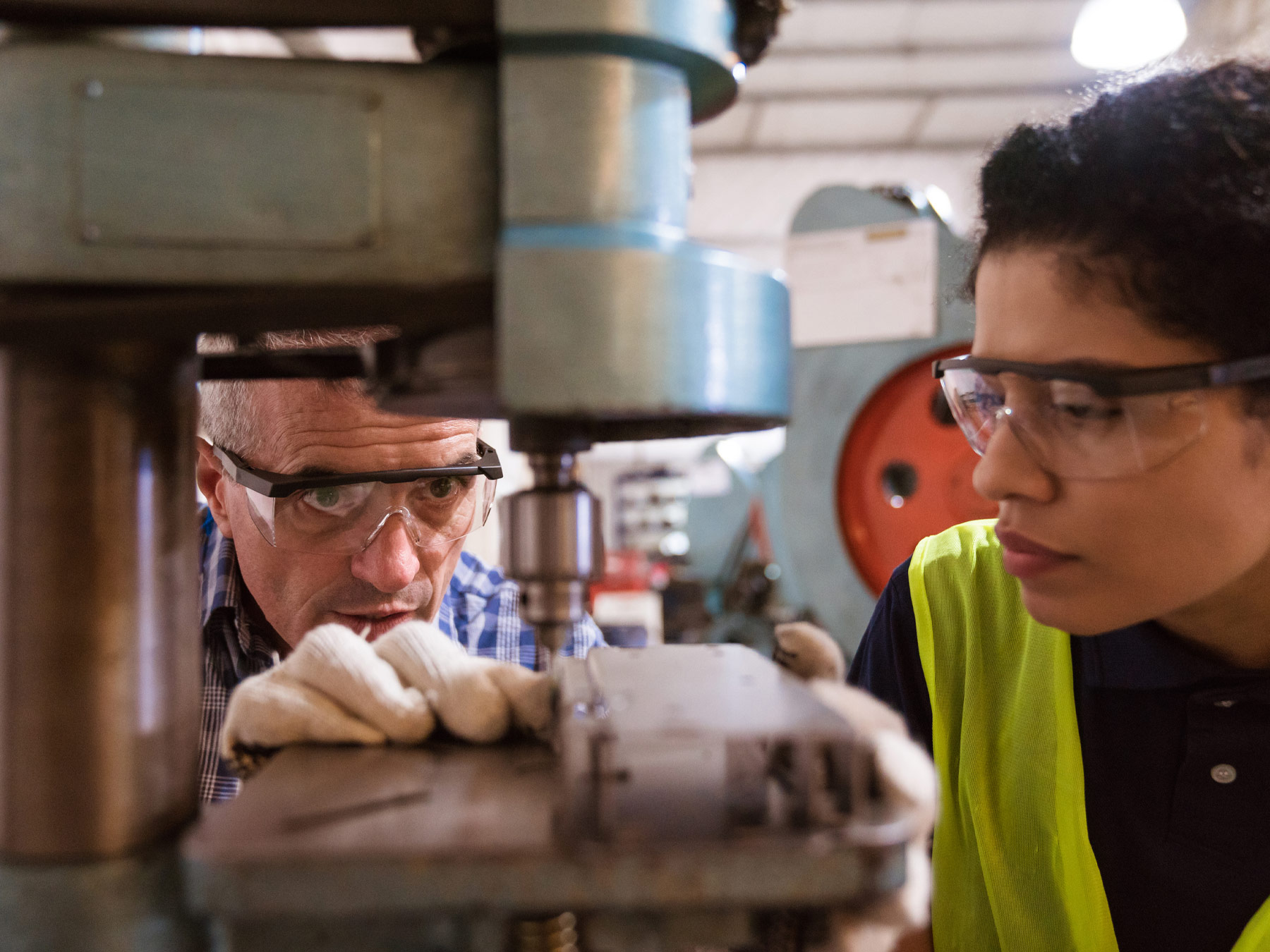 In 2010, the UIC College of Pharmacy expanded to Rockford, where nurse and physician training colleges were already in place. Find out why it’s already ranked among the top pharmacy schools in the nation.


Your physician is the expert on your medication, right?
Well … no. Physicians receive relatively little pharmacology training in med school, but Doctor of Pharmacy graduates receive four years of it. When doctors, nurses, pharmacists and other medical health care professionals work closely as a team, pooling their strengths, the best results are achieved for patients.
“It’s not like it was in the 1950s, when the doctor was the leader and everyone else followed the doctor,” says Dr. Martin MacDowell, associate director for curriculum development at the UIC College of Pharmacy at Rockford. “Today, various kinds of professionals come together in a ‘huddle’ and share expertise, working together on behalf of the patient.”
In its most recent evaluation of colleges, U.S. News & World Report ranked the UIC College of Pharmacy number 6 of 138 pharmacy schools nationwide, far outranking any of the other 5 Illinois pharmacy schools, and a leap up from its previous number 14 position. The college is part of health sciences campuses in Rockford and Chicago. In addition to the College of Pharmacy, the campuses include a College of Medicine for aspiring physicians and a College of Nursing, at both the Rockford and Chicago campuses.
“One of the things first-year students learn is that they’re being trained as experts in pharmacology, the study of drug effects and their use as medicine,” says Dr. Heidi Olson, clinical assistant professor and director of the Rural Pharmacy Education Program (RPHARM). “Physicians in training get a relatively small amount of pharmacology training.”

While the UIC College of Pharmacy has two campuses, it’s one college, says Dr. John Nitiss, interim vice dean, professor, and assistant dean for research. “Students receive precisely the same training at both campuses. We conduct broadcast learning in real time, all interactive with microphones.” The UIC College of Pharmacy’s Chicago campus had been operating at its 160-student capacity for years. Expanding to the Rockford campus in 2010 allowed another 50 students to be trained each year.
“There are about 9,000 pharmacists working in Illinois and one-third of them were trained by UIC,” says Nitiss. “More than 100 of our graduates are working right here in Winnebago County and their average salary is $116,000. We make a big impact.”
Along with training pharmacists, the UIC College of Pharmacy is deeply involved with research, on both campuses. It has 50-plus tenure-track faculty and more than 100 research and clinical faculty members conducting research while they train students. At the Rockford campus, Nitiss and his team are researching how cancer-fighting drugs work. Others are working to find new delivery systems for cancer-fighting medications.
“A recent study estimated that UIC contributes $4 billion a year to the Illinois economy, with the College of Pharmacy contributing heavily to that total with a solid 18.5 million in research dollars from the National Institutes of Health alone,” says Jerry Bauman, dean. “Research creates discoveries. Discoveries create patents and startup companies. Startup companies create jobs.”
Faculty members were issued 33 U.S. patents between 2007 and 2014; 37 of their discoveries were licensed to private companies.
“Overall, the discoveries, innovations and technologies created by our researchers have resulted in 11 startup companies in the past five years,” says Bauman. One example is Capio Biosciences, Inc., which touts the first medical device that can detect circulating tumor cells that escape from solid tumors. When these cells travel through the blood, they can be responsible for the metastasis, or spreading, of cancer throughout the body. Metastasis is a major reason why many cancers are fatal.
Research not only leads to better health, but to a better economy.
“Thanks to the amount of research performed here, College of Pharmacy researchers are helping the economy better than almost anyone else,” says Bauman.

Expanding the College of Pharmacy to the Rockford campus, in 2010, was a direct response to the growing need for pharmacists in general and rural pharmacists in particular. In Illinois, there are too many pharmacists in many larger communities and too few in smaller ones. And the roles played by small-town pharmacists are often very different from their urban counterparts.
That’s where the National Center for Rural Health Professionals comes in. It was established in 1993 and is hosted by the Rockford campus. Because rural pharmacists are often called upon to deal with different types of issues than their urban counterparts, the UIC College of Pharmacy offers a concentration in rural pharmacy services, called Rural Pharmacy Education Program (RPHARM) within the Doctor of Pharmacy degree program.
RPHARM students typically come from small communities and demonstrate a desire to work in smaller, underserved communities after graduation. Their elective courses provide insight into issues facing rural communities, through projects, field trips and seminars. They collaborate with College of Medicine RMED students – doctors-in-training who also plan to work in rural communities – throughout the four years of pharmacy school.
“Often the pharmacist is one of just a few medical health care professionals in the community,” says Olson. “So the pharmacist and local physician tend to help one another out.”
Jamie Seiffert, a fourth-year student at the Rockford campus, saw this firsthand during a shadowing experience in her rural hometown of Carlyle, Ill., 50 minutes east of St. Louis, Mo.
“At the hospital I worked in, I knew 90 percent of the patients and shadowed the primary care doctor I grew up with,” she says. “A new chiropractor opened an office in town and it’s such a big deal to people. They’re so excited they’ll no longer have to drive 30 or 40 miles to see one.”
Rural communities aren’t the only constituencies clamoring for more pharmacists.
“The functions of a pharmacist are expanding quickly,” says Dr. Erin (August) Carson, clinical assistant professor and a UIC College of Pharmacy employee who practices pharmacy at SwedishAmerican Hospital. “Along with retail pharmacy settings, our grads are in demand by hospitals, clinics, long-term care facilities, pharmaceutical companies, insurance companies, home health service organizations, forensic science offices, tons of places.”

While an undergraduate degree is not a requirement to get into the Doctor of Pharmacy program, about 80 percent of the College of Pharmacy students have bachelor’s degrees. After graduating with a Doctor of Pharmacy degree, they will take a national exam in order to become licensed. The first College of Pharmacy graduates in Rockford, the Class of 2014, had a 100 percent pass rate.
“One reason our college ranks so well is because we attract and select top students,” says MacDowell, the associate director of curriculum development. “During the interview process we look for personality, along with other factors. Some students are very smart but are not people-oriented. Pharmacy is a very people-oriented profession.”
The intimate Rockford campus and surrounding community are especially people-oriented, which is why fourth-year student Matt Horney chose it over the Chicago campus.
“Chicago may seem more exciting, but I urge people to choose Rockford. It has smaller class sizes, no hectic commutes, a cheaper standard cost of living and you’ll know everyone in your class,” he says.
Jordan Burkholder, also a fourth-year student, agrees.
“It’s also important to note that we have great hospitals here – they’re top notch and they’re not over-saturated with learners,” says Burkholder. “One reason people view this as a top school is because the faculty pushes students to develop their skills by engaging with the community. It’s about more than knowing the material. They want you to know the big picture, too.”
Many of the preceptors – the teachers who bridge the gap between class time and practical, real-world experiences – work in the Rockford region. For example, Dr. Chris Schriever is a clinical assistant professor and a clinical pharmacist contracted by Crusader Clinic. He works with HIV patients in an ambulatory care setting. Students get to witness how he collaborates with doctors and nurses on a daily basis to tailor medications to individuals.
“Maybe this person is homeless and needs to have a simple prescription he can take just once a day, or maybe this one drinks heavily, which affects his medication options,” Schriever explains. “We look at a patient differently than a physician does, and at each person as an individual.”
Students see yet another type of pharmacist at work when they shadow Dr. Erin (August) Carson at SwedishAmerican Hospital as she provides transitions of care services. August discusses medication with patients and caregivers before patients are released from the hospital.
“Getting a medication protocol right is very important, but it can be confusing for patients,” says August. “Good communication is essential.”
In these and many other local settings, students find plenty of real world pharmacy action in Rockford.
“It’s a big advantage for students that the Rockford community embraces us,” says Olson. “Our students get involved in all sorts of events throughout the community. We get calls like, ‘Please come and help us out with blood pressure screenings during our event,’ or immunization clinics or health-related booths at county fairs – whatever. It’s a win-win for them and for us.”
And students know that learning doesn’t stop with graduation.
“Pharmacists are taught from the start they they’ll be lifelong learners and will need to keep up with ongoing education every year,” says Olson. “For example, the guidelines on blood pressure taught to Class of 2016 students in their first year had already changed by their third year.”
“That’s the first thing they tell you,” says fourth-year-student Burkholder. “What you learn today won’t necessarily be the same two years from now. You have to be really flexible in your learning.”
The profession recognizes the importance of ongoing education and requires pharmacists to take continuing education classes to maintain their licenses.
Along with the Doctor of Pharmacy program, the UIC College of Pharmacy offers continuing education classes, four PhD graduate programs and one master’s program that reflect trends in the evolving new world of pharmacy.

As important as collaboration is among doctors, nurses, pharmacists and other medical health care professionals, there’s one more key player in the mix – the patient.
“Be a proactive patient,” advises Olson. “Keep a list on you of your current medications. Be engaged. Pick one pharmacy and stick with it. Don’t hop around for price if you can help it. If you go to multiple pharmacies, some drug interactions may be missed. And don’t be afraid to ask your pharmacist questions.”
The U of I College of Pharmacy at Rockford is a gem in our region’s crown. Its symbiotic relationship with our community contributes to the well-being of people throughout the state and beyond. And who knows how far the impact of its discoveries may reach across the world? Discoveries derived from research conducted right here in Rockford.