Illinois has more nuclear power plants than any other state, but what exactly happens at these plants? Discover how Byron Nuclear Power Plant positively impacts our local economy and why some people are concerned about unresolved problems. 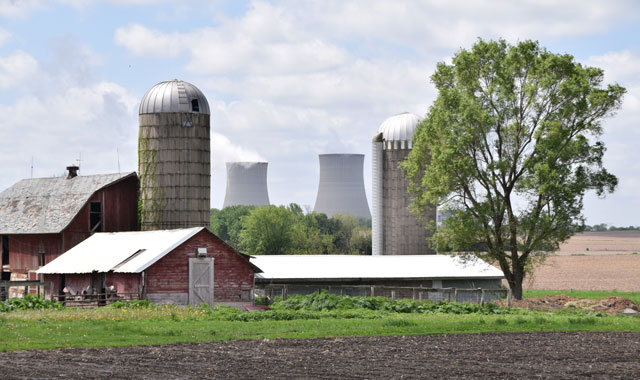 The twin cooling towers of the Byron Generating Station, visible for miles around the area, loom large on the local landscape. Located just two miles south of the town, the nuclear power plant sits on a hill overlooking the nearby Rock River and produces electrical energy for nearly two million customers.
The federal Department of Energy (DOE) is responsible for research and development of commercial energy sources and manages the nuclear weapons program. According to it, there are 99 nuclear reactors located in 61 power plants producing electricity in our country. Fourteen reactors are shut down and in the process of being decommissioned (deconstructing retired reactors and making the sites radiologically safe). There are four new nuclear power plants (NPPs) under construction.
Illinois has more NPPs than any other state – 14 total, 11 operating at six locations, three closed permanently (Dresden #1 and Zion #1 and #2). According to the Chicago-based Nuclear Energy Information Service (NEIS), an anti-nuclear watchdog group, if Illinois were a nation, it would be the 11th largest nuclear power in the world, just behind Ukraine.
We also have the longest history with nuclear energy, since the first controlled nuclear reaction occurred at the University of Chicago in 1942, as part of the Manhattan Project. Almost half (48.2 pecent) of the electricity produced in Illinois comes from nuclear energy; the national average is 19 percent.
Exelon Corporation, which owns and operates all of the NPPs in Illinois, has a national “fleet” of 23 reactors in 14 power plants, making it the largest commercial operator in the U.S. It formed in 2001 and took over ComEd’s Byron plant the same year; ComEd is one of Exelon’s many subsidiaries.

Groundbreaking for construction of the Byron plant occurred in 1975, but almost a decade passed before the plant began producing electricity. In 1979, a major accident at the Three Mile Island NPP in Pennsylvania galvanized anti-nuclear protest groups throughout the country, including some in northern Illinois.
Several organizations in the Rockford area, including the League of Women Voters, the Sinnissippi Alliance for the Environment (SAFE) and DeKalb Area Alliance for Responsible Energy, decided in 1983 to file a legal “intervention” during the Byron licensing hearings of the Nuclear Regulatory Commission.
Evidence presented in the four months of hearings regarding safety procedures and construction complaints convinced the Atomic Safety and Licensing Board that paperwork submitted by ComEd didn’t fully address the problems. Consequently, ComEd was initially denied a license to operate the plant.
“As far as I know, that was the first time in our history that a NPP was denied its license,” recalls Stanley Campbell, a founding member of SAFE. He’s now the executive director of Rockford Urban Ministries. “A year later, during the re-hearing, ComEd claimed it had re-inspected every one of the specific concerns the intervention had raised. ComEd finally got its 40-year license to operate.”
According to Campbell, at least four other utility companies in the U.S. later abandoned plans to construct NPPs, partly as a result of their intervention and growing national anti-nuclear sentiment.
“A good majority of NPPs in the U.S. experienced some kind of intervention before being given a license to operate,” says Paul Dempsey, communications manager at Exelon’s Byron Station. “Lots of people didn’t want the plants to be built, more out of fear than science. We’ve had a lot of people change their position over the years, from anti- to pro-nuclear energy.”
Construction at the Byron Generating Station was completed in 1985 at a cost of $4.5 billion. Unit #1 went on line that September, Unit #2 in August 1987.

In simplest terms, a nuclear power plant is a very expensive and complicated – although reliable – way to produce electricity by heating water into steam. The Byron Generating Station contains two pressurized water reactors that utilize a controlled nuclear reaction called fission. This occurs when subatomic particles called neutrons split the nucleus of uranium atoms, freeing other neutrons to split other atoms in a chain reaction. Energy in the form of tremendous heat is released.
The reaction is controlled and can be stopped by inserting control rods into the reactor, which absorb the free neutrons like a sponge. The uranium used in a nuclear reactor is not “enriched” or refined enough to produce a nuclear explosion, so there is no chance the reactors might someday disappear in a mushroom cloud.
The chain reaction takes place inside a reactor vessel, a 60-foot-tall capsule-shaped container made of eight-inch thick steel. Water in a self-contained, pressurized loop circulates around the reactor core, becoming heated to more than 600 degrees. This is the only water exposed to radiation. The heat is carried by water to a heat exchanger, where it produces steam in another closed loop of pipes containing water. This steam, now at 890 psi pressure, enters huge turbines and drives the blades which rotate a shaft connected to an electric generator.
The turbines are housed in an 830-foot-long building, large enough to contain a World War II aircraft carrier. Each generator produces about 1,120 megawatts of continuous electricity, which is then fed into the local power grid.
Meanwhile, a third closed loop of pipes circulates water from a storage pond between the cooling towers, which is used to cool the steam from the turbines back into water. This last loop gives up much of its heat in “fill packs” at the base of the 495-foot cooling towers, which are essentially very large chimneys. The source of the pond water is the Rock River, which is pumped uphill from the river at the rate of 30-40,000 gallons per minute. As the water evaporates, it rises through the hollow towers, where it condenses into small droplets, creating the clouds we see continuously floating from the tower tops.
About one third of the water pumped from the river is reused in the storage pond, another third escapes into the atmosphere in those clouds, and the rest is returned to the river. A 26-acre “mixing zone” around the discharge pipe allows the water to match the ambient temperature of the river before floating downstream.
“Periodically, we remove dump trucks full of debris from the base of the towers, which used to be in the Rock River,” says Dempsey. “We consider ourselves stewards of the environment, so we put water back into the river in better shape than what we took out.”
Each reactor, located below grade level, and four steam generators, are housed within a 199-foot-tall containment building made of 3.5-foot thick steel-reinforced concrete walls with a steel liner, and wrapped with steel cables on the outside. The nuclear fuel in the shape of small ceramic pellets is held in fuel rods, which are placed in assemblies about one foot square and 12 feet long. Each reactor core holds 193 assemblies at one time.
About every 18 months, one of the reactors is shut down and one third of the oldest fuel is removed and replaced with new assemblies. The spent fuel is still extremely radioactive, and produces “decay heat” which must be actively cooled. These assemblies are stored in a spent fuel pool adjacent to the containment building for about five years.
Eventually, these spent fuel assemblies are placed in a steel “dry” cask, 32 bundles per cask, while under water in the storage pool. The cask is sealed and removed from the pool, then placed in a concrete and steel shell or “overpack,” 11 feet in diameter, 16.5 feet tall, weighing 180 tons when fully loaded. The overpack’s outer walls are 27 inches of steel-reinforced concrete. Since the spent fuel continues to create much heat due to the ongoing radioactive decay, the overpacks are vented to allow the heat, but not the radiation, to escape into the atmosphere.
The casks, or overpacks, are transported from the fuel-handling building to an outside storage pad by a 90-ton custom-built “crawler.” There they will remain until a national repository for spent nuclear fuel is chosen. All the spent fuel, now called high-level radioactive waste (HLRW), generated at Byron since 1985, is still there in storage. The same holds true at every other NPP in the country. Presently, there are 2,651 used fuel assemblies in the spent fuel pool at Byron, with another 640 bundles in 20 casks on the concrete storage pad at the back of the plant.
“While that sounds like a lot, all the used fuel itself could fit into a three-car garage,” says Mark Rasmussen, senior reactor operator at Byron Station. “It’s very compact.”

Where to Put Radioactive Spent Fuel

While spent fuel from nuclear power plants is no longer viable to produce electricity, it remains dangerously radioactive for thousands of years, if not longer. Since the 1960s, most nuclear scientists have agreed such waste should be placed in a geological repository – a big, deep hole in the ground – to protect the biosphere from its effects. What hasn’t been agreed to is where that hole should be.
The 1982 Nuclear Waste Policy Act stipulated that the federal government would create such a repository, and that HLRW would start being transported there by 1998. The DOE studied Yucca Mountain in Nevada, 80 miles from Las Vegas, as a potential site from 1978 to 2011, but politics intervened. Most of the citizens of Nevada, who have no nuclear plants in their state, don’t want it there, and the states which must be traversed in order to get the HLRW there objected, too. The Obama administration cut off federal funding for Yucca Mountain in 2011.
A Blue Ribbon Commission, established by the Secretary of Energy in 2009, recently recommended that the DOE use a “bottom up” procedure called consent-based site selection to find another location, and public meetings to start that process began in Chicago in April. According to the DOE, there are about 75,000 metric tons (MT = 2,000 kilograms) of HLRW currently stored around the country where it was used, and another 2,000 metric tons is added each year. According to Dempsey, that total volume would fill a football field 15 feet deep.
The federal government has been shipping nuclear waste from Department of Defense facilities to a deep geological repository 26 miles east of Carlsbad, N.M., since 1979. Called the Waste Isolation Pilot Plant (WIPP), it is currently the only facility in the U.S. licensed to permanently dispose of HLRW, but it only accepts defense program waste. Because it’s a pilot project, WIPP’s storage capacity is limited. Researchers have incurred some problems of contamination in recent years, most recently a fire and canister rupture in 2014.
Lacking an operating repository for HLRW, the federal government owes utility companies between $300 and $500 million per year in compensation for failing to comply with the contract it signed to remove the spent fuel by 1998. This is the amount collected by the federal government from utilities to build the repository, which was never done. Partly in order to reduce this liability, the DOE has suggested creating interim sites where HLRW can be centralized while waiting for a permanent site to be chosen.
Anti-nuclear groups like NEIS object to this plan, insisting that such waste should stay where it is and only be moved once – to its final destination. They suggest that the Nuclear Regulatory Commission (NRC) adopt a program called Hardened On-Site Storage (HOSS), whereby each nuclear waste storage cask would be surrounded by earth berms to hide them from ground-level view. They would need to be able to withstand a terrorist attack with an anti-tank missile or a crashing commercial aircraft.
Although this plan was successfully implemented at some reactors in Europe, the NRC and industry spokespersons have rejected the HOSS idea as expensive and unnecessary.