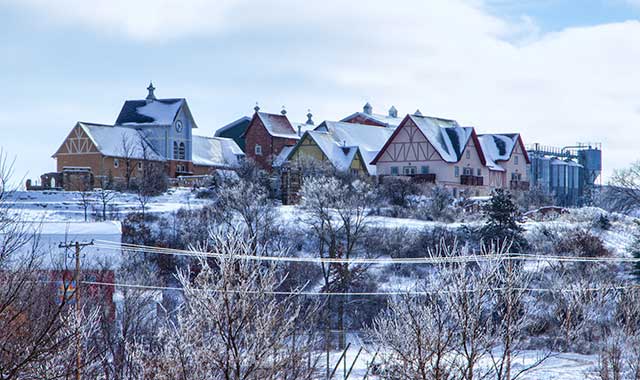 WREX reporter Reuben Jones reacts to breaking news on a daily basis. Step into his shoes as he responds to bank robberies, covers car crashes and digs deeper into stories about homeless students in Rockford. 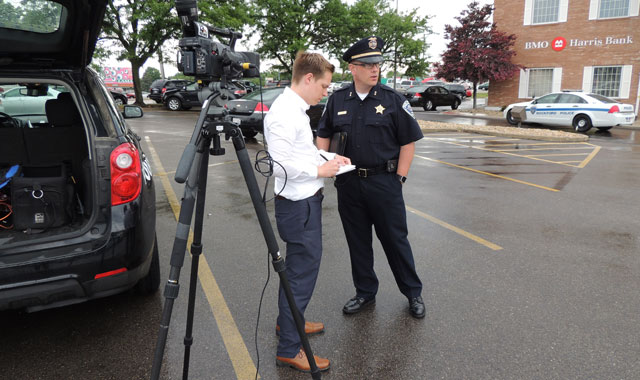 The 13 WREX newsroom is calm less than an hour before the 5 and 6 p.m. newscasts begin.
Under the continual sounds of the police scanner, reporters finish writing and editing their packages as the evening anchors and production team finalize the night’s lineup. But right at 4:10 p.m., Joseph Edwards, internet director, receives a call. It’s breaking news from the Rockford Police Department: two BMO Harris Banks were just robbed by the same suspect.
Immediately, multimedia journalist Reuben Jones is up from his seat. He and anchor Kristin Crowley dash from room to room, gathering camera packs and other equipment, in between shouts of information from Edwards and content manager Audrey Moon. With written addresses in hand, Jones and Crowley each grab keys to WREX cars and separately dash off to the two crime scenes.
“All I know is that we’re heading to a bank that’s been robbed,” says Jones as he plugs the address into a GPS. “I believe Kristin is heading to the other bank, where the police are giving a press conference and will provide an update. Both of us are providing live reports at 5 p.m., which is in 45 minutes. I know nothing else that’s going on right now, so I’m hoping to get filled in once we get there.”
It’s an adrenaline-fueled change of plans, but Jones is used to dealing with the unexpected. The 25-year-old reporter has been a part of the 13 WREX team for nearly a year and a half, covering stories and breaking news about crime, natural disasters and accidents across the greater Rockford region. He runs through a quick checklist before driving off: camera, tripod, microphones, LiveU transmission backpack, IFB earpiece, suit jacket, weather jacket, ties and makeup to be on-camera ready. Beyond that, you just have to go with what you’ve got, says Jones.
“I once went to do a live shot, up in Beloit, and all I knew was that it was a shooting,” he says. “I really didn’t know anything else until I got there at 10 p.m. and that’s when we went live. So you just have to describe what’s going on. You can’t speculate on anything, just state the facts, until you can talk to police and have them fill you in on exactly what’s happening.”
Heading east on Route 20, Jones coordinates over the phone with Moon, Edwards and Dan Cohen. Cohen is a multimedia journalist and weekend sports anchor who is meeting Jones at the scene to be his photographer. He is welcome help, says Jones. Reporters sometimes have to work the camera and report during live coverage, when the staff is short on photographers. Today, all hands are on deck.


Jones arrives by 4:40 p.m. to the sight of multiple police cars and yellow tape blocking the bank’s doors at South Alpine and Newburg roads. Wasting no time, he greets Assistant Police Chief Doug Pann and asks for an interview.
Jones takes notes and works the camera as he records Pann providing an updated police statement with details on the unidentified suspect, his first attempted robbery at South Alpine and Harrison, and his second successful robbery at the current location. The footage will later be sent through a LiveU transmission back to the station to be used for the 6 and 10 p.m. newscasts.
Cohen pulls in right as Jones is rushing to set up the live shot for 5 p.m. Both reporters start to pick up speed; talking to news director Josh Morgan on his cell, Cohen checks the video and audio levels as Jones puts on his suit jacket and IFB earpiece. Jones’ microphone isn’t coming through the LiveU, and it’s a focused but stressful rush to figure out the problem. Switching to the lavalier microphone seems to work just in time, and Jones gets into position in front of the camera.
For a few moments, there’s only silence. Then anchor Sean Muserallo, back at the station, turns the story over to Jones.
“Well, good evening, Sean. We’re only about 10 minutes away from where Kristin is at the other BMO Bank,” Jones reports. “Police say the same suspect came inside the building and demanded money. He did not show or use a weapon, but he did make some violent threats and got away with an undisclosed amount of money. Police are actively searching for a Hispanic male who is 5’8” and wearing a Bulls hat, black T-shirt and sweatshirt.
This is still an active situation and they’re actively looking for the suspect. We’ll have more for you on 13News at 6. This is Reuben Jones, reporting live in Rockford. Sean, back to you.”
In less than two minutes, it’s over. It will be an hour before Cohen and Jones go live again with an updated report. Until then, there’s time to take additional b-roll and otherwise relax.
“It’s shaping up to be quite a heavy show,” Jones says.
Cohen responds, “Haven’t they all been recently?”
That morning, Jones had prepared a different story to go to air.
After spending Memorial Day weekend in his hometown of Charlottesville, Va., he arrived at the 13 WREX station around 9 a.m. to prepare for the morning news meeting. Luckily, he already had the next four days’ stories planned out, and he was excited for the package he had set up for that day.
For weeks, he had been investigating a story on the rising number of Rockford area homeless students. His sources at the Regional Office of Education and Rockford Public Schools had shared statistics showing a nearly 300 percent increase in homelessness among Winnebago and Boone county students since 2011. Meanwhile, funding per student has dropped 84 percent.

“I was first drawn to this job in Rockford because the mission of this station, ‘Digging Deeper,’ really stood out,” says Jones. “I consider this story a ‘Digging Deeper’ story because we’re really looking at the numbers – it’s more investigative and hard-hitting. It’s an important story to tell that people might not know about.”
The morning and dayside team gathered in the news conference room at 9:45 a.m. to plan out the day’s stories. Short a photographer, the staff discussed how to best use their limited resources to cover the day’s most pressing topics. The weekend had brought a slew of crimes that need to be addressed, including two shootings Sunday, a shooting and murder-suicide Monday, shots fired Monday night and another shooting that morning.
Morgan and Moon debated reassigning Jones from the story on student homelessness to a crime follow-up piece, but assigned it to reporter Tori Clark instead.
“My biggest challenge is finding time to do the more in-depth stories, because so often I get diverted due to breaking news,” says Jones. “But I think the challenge is being able to tell those stories in a unique way. If you can show what it’s like to live in some of these areas that are infested with crime and poverty, that’s what I think is a really worthwhile story.”
It all starts with Jones’ favorite part of the process: the interviews. He typically coordinates two or more interviews each day, in between shooting b-roll, covering photographer assignments and researching story leads.
Starting at 11 a.m., Jones met with Alex Brewington, director of student support for the RPS Families in Transition (FIT) program, to discuss how funding cuts have affected resources for homeless students. She and FIT co-worker Elmer Rice explained how homelessness impacts a student’s performance and wellbeing.
“Local news has power because it’s what impacts people the most,” says Jones. “It’s more personal than national news, and the video allows you to see the raw emotion in a community member’s face. You can actually feel what they’re going through.”
It’s an advantage to broadcast that Jones appreciated while interning at NY1 and CBS News 60 Minutes, where he was part of the 60 Minutes Overtime web team. There he helped create online videos featuring correspondent candids, interviews with the producers and unused footage from the show. Jones has a diverse set of experience in web, print and broadcast journalism, and his years in graduate school at New York University solidified his preference.
Just after interviewing Harold Sweeney, director of at-risk services for the Regional Office of Education, Jones received a call from Moon about a fatal crash on Route 20. It was a brief rush through the rain to see if Jones can gain access to the scene.
“To be successful at this, a reporter needs to be flexible, persistent, passionate and patient,” says Jones. “But it can be hard when you’re stuck behind slow traffic.”

Route 20 was completely blocked off, so he turned around. By 2 p.m., Jones itched to return to the station to write and edit his package together. He could already recite the framework for the script while driving back so that, after quickly checking in at the afternoon news meeting, he could create the less than two-minute story before the upload deadline 5 minutes before 5 p.m.
By the 4:05 p.m. call that afternoon, Jones had finished his package to run in the 6 p.m. newscast and was preparing the voiceover-to-sound (VO/SOT) preview for the 5 p.m. show. But for breaking news, it’s a drop-all procedure.
Jones remained cheerful, even with the last-minutes changes.
“This actually works out well because the homeless story is pretty much done, so I’ll be able to use that for tomorrow,” he says. “It’s not a wasted effort.”
Returning to the station from the BMO bank robbery at 6:30 p.m., Jones, Crowley, Cohen and the rest of the team are still energetic from the rush of the coverage. The production and news teams gather in the newsroom to go over the mistakes and strengths of that evening’s newscasts – today, it’s mostly the latter.
“You all really knocked it out the park tonight,” says Morgan from the head of the room. “This really was our first opportunity to take advantage of the new studio and it really showed by how tonight’s stories were told. To have Reuben and Kristin next to each other live on the monitors for the robberies, and a state budget countdown clock with Sean, we had the shootings graphic that showed up in that monitor with Kelsie (Passolt) live next to it, and then to get Gov. Rauner live to finish the show. There’s a difference between producing to make something look pretty and producing to tell a story, and tonight we had everything work together to tell a story. It was awesome.”
For the 13 WREX team, it’s a good way to end the Emmy Award-qualifying season that runs from June 1 to May 31 every year. For Jones, it’s another example of why he loves covering Rockford’s news.
“This is not really your typical 9-to-5 job. Truly, every day is different because Rockford never really slows down,” he says. “That’s the great thing about journalism, though; there’s always a great story, no matter where you live. And that’s definitely true here.”
Tags: breaking news broadcast journalism day in the life journalism news Reuben Jones rockford wrex
Share on
Share on Facebook Share on Twitter Share on Pinterest Share on Email
Sarah Soenke June 29, 2016