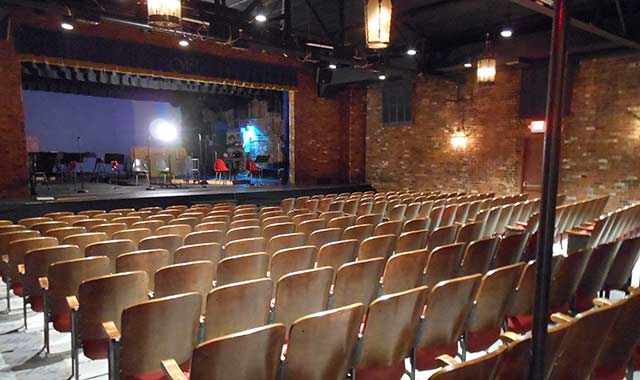 These Rockford-area musicians are living their musical dreams as they make a name in the world of country music. Learn more about their natural talent and upcoming album release.


Bobby “The Iceman” Golomboski has worked in the country radio music business for more than 30 years.
As a syndicated deejay, he’s played the hits of some of the biggest and brightest stars to come up through the ranks – the likes of Jake Owen, Dierks Bentley and Blake Shelton. Now, he’s talking about another rising star who happens to call southern Wisconsin home.
“The first time I heard Zac Matthews I knew he was something special,” says Golomboski, who was one of the first deejays to play the Milton, Wis., resident’s music. “With his personality, talent and good looks, Zac’s going to be a star in country music. He’s the type of guy you wouldn’t mind your daughter bringing home.”
That’s pretty high praise about a guy who just turned 20.
Matthews is the frontman of the Zac Matthews Band (ZMB), a country group that’s turning heads across the nation. The band’s bass player, Steve Blachford, calls Rockford home and drummer Zach “Johnsy” Johns lives in Beloit. Matthews and Blachford are full-time musicians, while Johns juggles a day job as an electrician.
In the past year alone, ZMB has opened for some of country’s best, including Kelsea Ballerini, Randy Houser, Billy Currington, Craig Campbell and Tyler Farr.
In addition to playing bars and small clubs around the area, ZMB has performed in venues such as the Rave/Eagles Club in Milwaukee, The Grand Theater in Wausau, Wis., the Rock County and Green County fairs, the Wildhorse Saloon in Nashville and the Milwaukee County Zoo with Cassadee Pope, winner of NBC’s “The Voice.” The band members have traveled to Nashville a half-dozen times this year to work on their new album, and they’ve also headlined three tours to the Virgin Islands.
All that and they’re just getting started.
“We’re not afraid to give it our all, no matter the size of the audience,” says Matthews. “That’s what defines us as a group. There could be five people in the audience, and we’ll still give it our all. We just love the music.”
In October, the band cut its new album, “It’s On Tonight,” with Big Machine Records producer Bill McDermott at Omni Studios in Nashville. ZMB had assistance from studio musicians who’ve played with Taylor Swift, Jason Aldean and Cole Swindell. “This album shows our variety of styles and influences,” says Matthews.
The band is launching its first album Jan. 23 at a release party at the Barrymore Theater in Madison, Wis. The first 200 tickets sold will include an autographed CD and a meet-and-greet with the band. Advanced tickets are $25 and $28 at the door. Part of the proceeds will benefit St. Jude Children’s Research Hospital.
“Their new music is fantastic,” says Golomboski. “It’s only a matter of time before they hit the big time.”

Matthews’ love for music started at a young age. His parents say he was about 3 when they found him trying to sing country tunes. Before picking up the guitar, he was banging on drums. Among his favorite musicians were hard rock drummers Alex Van Halen and Tommy Lee.
“I loved singing, but I found it was hard to play drums and sing at the same time,” he says. “That’s when I picked up a guitar and fell in love.”
Matthews was 15 when he laid his hands on his great-grandfather’s rare 1920 Gibson guitar. “There was so much action on that thing,” he says. “It was like putting my hands on straw string.”
At Milton High School, Matthews, whose real last name is Molitor, was a decent athlete. He wrestled and played football and baseball. In fact, his cousin is former professional baseball player Paul Molitor. But Zac’s true passion was music.
As a freshman, Matthews convinced his principal to let him take an AP Music Theory class, which is usually reserved for upperclassmen. That class was where Matthews learned the intricacies of playing guitar – chords, scales, sharps and flats. “I’m a sponge when it comes to learning,” says Matthews. “I wanted to know everything I could about the guitar.”
It wasn’t long before Matthews joined his first band, a Christian group, before he decided to concentrate solely on country music. In 2014, he caught his first big break when he tied for second at the 32nd Annual Texaco Country Showdown National Finals at Nashville’s historic Ryman Auditorium. Every year, more than 50,000 acts compete in the Country Showdown, which is considered to be the largest country music talent competition in the country. To get there, Matthews won both the Wisconsin and regional finals. While he didn’t win the grand prize of $100,000, he was named the best Male Country Act as the last male remaining in the competition.
“It was a great experience,” he says. “I got to hang out with some talented singers and songwriters. It really opened my eyes about how far I could go in this business.”
Johns and Blachford heap praise on Matthews, who stands out on stage thanks to his 6-foot-6 frame, All-American good looks, affable personality and wicked guitar playing.
“Zac is a natural,” says Blachford. “He has an energy that people just flock to.” Even when things don’t go as planned. During one show, Matthews didn’t feel well, so he left the stage to get sick, before coming back to finish the song. “He didn’t miss a beat,” says Blachford.
Matthews calls his guitar style “chickin pickin,” which is best described as snapping the strings by pulling up on them to get a sound like a chicken talking. Chickin pickin has been made famous by the likes of Vince Gill and Brad Paisley.
“My guitar playing is heavy on the twang,” says Matthews, who lists Paisley, Gill, Keith Urban and Stevie Ray Vaughn as his musical influences.
Says Johns: “I’ve never seen anyone play guitar like Zac.”

Matthews met Johns a couple of years ago and hired the drummer to play the Rock County Fair last year. A few months later, Matthews hooked up with Blachford through mutual friends. “I auditioned for him and was hired that same night,” Blachford says.
Johns, 22, has been around music most of his life, thanks to his father’s job with a production company. Johns started out by playing the blues with Pistol Pete, a local guitar player, and with a pop rock dance band.
Blachford started playing piano at age 6 and picked up his brother’s classic guitar at 12. Three years later, he started playing bass. He came into country after playing in punk rock and heavy metal bands. “Now,” he says, “country is all I listen to.”
Golomboski says that, for a new band, ZMB has a great rapport. “They sound like they’ve been playing together for years,” he says. “They have great chemistry. They’re unique and fresh. They work their tails off. The excitement they bring to the stage is phenomenal. It’s what country music needs.”
On and off the stage, band members are exceptionally close. “We can be on the road for two to three weeks at a time. Then we’re home for just one day and we really miss each other. It’s weird,” says Matthews. “We have a bond. We can fight, we can laugh, but at the end of the day we love each other. We’re like brothers. There are no egos in this band.”
Members of the group relish their time on the road, whether it’s a one-night gig close to home or a weeklong stay in Nashville. Matthews is the only single member of the group.
“I love to travel,” he says. “Being in a band, we get to see the world in a way that’s different than how other people see it. In a short amount of time, we’ve done some pretty cool stuff.”
Blachford, 30, is married with two young children. “My wife is extremely supportive,” he says. “She knows this is something I’ve always wanted to do. Does it get tough? Yes. Thankfully, it’s easier to stay in touch with today’s technology.”

When they’re off the road, Matthews and his bandmates stay plenty busy. They fill their days with rehearsals, writing new songs, setting up future gigs and marketing the band. Matthews calls himself a stern businessman, not afraid to make tough decisions. “We spend a lot of time making phone calls and hitting the pavement,” he says. “It’s hard work, but it’s paying off.”
But they’re not going at it alone. Recently, Golomboski introduced the band to Orville Almon, a prominent Nashville-based entertainment lawyer who’s represented some of the biggest names in country music, including Aldean and Dwight Yoakum. And now he’s working with ZMB.
“He’s one of the good guys,” says Golomboski. “In this business you have to watch your back. Orville is the one who can do that for this band. I’m 100 percent confident this will be a good match.”
“Many artists out there have talent, but you also need luck, connections and the drive to not give up,” Golomboski adds. “But the most important thing is to have the right people who believe in you and your ability. Bill McDermott is that guy. So is Orville Almon. I think 2016 is going to be a big year for the Zac Matthews Band.”
ZMB has booked shows well into next summer, including festivals like Old Settlers Days in Roscoe, Ill., Juda Fore Fathers Festival in Juda, Wis., and Rhythm on the River in Fort Atkinson, Wis. They’ll also perform at the CMA Music Festival next June in Nashville, for the second year in a row.
With as many as four gigs a week, the band recently purchased a customized bus to make travel easier. Many of their stops are in small rural towns across Illinois, Iowa and Wisconsin. Matthews prefers playing smaller venues. “Big cities are oversaturated with music,” he says.
Still, they know that reaching the next level probably means a move to a larger market. The band plans to relocate to Nashville, where it spent a chunk of this year making its debut album. “I like Nashville a lot,” says Matthews. “It’s exciting to be there with bands that I have been listening to for years. There’s a lot you can learn just by watching them.”
For the time being, they’re content with making things happen here at home. And country fans are starting to take notice.
Matthews has been greeted at his local grocery store by autograph seekers, and the band occasionally runs into fans wearing ZMB T-shirts. “That’s cool,” says Matthews. “It really hasn’t sunken in yet.”
Golomboski says listeners of his syndicated radio show on bestcountryradio.com love ZMB’s new single, “It’s on Tonight,” which debuted earlier this month. Now the band can’t wait to play it live for fans at next month’s release party.
“It’s on Tonight” is more than just a song title to Matthews. It’s an attitude.
“When we come to town, you know where the party is at,” he says, smiling. “When we’re on stage, it’s always a good time.”
Blachford agrees. “We’re living our dream.”