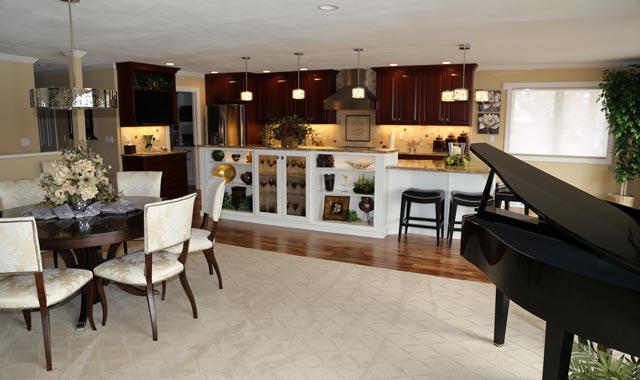 Meet a custom carpentry group that began amidst a recession and continues to grow, even through the latest downturn. Find out how this group continues to find success.


Inside a brick building on Rockford’s Seventh Street is a shop that smells like freshly chopped firewood. In every direction you look, men in jeans and masks are sanding and sawing, priming and painting.
“You should have seen this place this summer,” says John Kruschke, owner of Premier Woodwork, 1522 Seventh St. “We were just so busy. We’re just coming back from Christmas, and things are picking up again. We just shipped out a lot.”
Kruschke points to a large project taking shape, a reception counter for a nursing home in Chicago. Nearby, a custom closet is underway for a house on Rockford’s National Avenue. There’s molding being created, cabinets being finished, and a stack of wood that looks like someone sliced through a tree trunk vertically.
“Back plates for some taxidermy work,” Kruschke says, smiling. “Someone’s going to put some antlers on there.”
Premier Woodwork creates high-end commercial and residential millwork, and can help customers with anything from simple repairs and refinishing jobs to completely customized designs.
Kruschke may not have imagined so many projects to oversee 20 years ago, when he started a one-man operation at the corner of Cedar and Avon streets in downtown Rockford. Despite a recession and many changes to the industry, business has been good for the Premier crew – so good that they just celebrated a 20-year anniversary last year, and they’re thinking about an expansion.
“So long as the work keeps coming along, we’re going to go after it,” says Kruschke.

Premier Woodwork began about as simply as a business can.
“In 1994, the company I was working for, Schmeling Millwork, went out of business and I had a choice – I could look for another place to work, or go out on my own,” says Kruschke. “I was kind of flying by the seat of my pants.”
But Kruschke had an advantage: he had worked for his dad, a shop manager, back in Milwaukee, before he moved to Rockford.
His father provided him with some tricks of the trade.
Kruschke knew he was taking a risk, so he started small. He set up a small shop doing strictly residential work like kitchen projects, entertainment units and fireplace surrounds. It didn’t take long before he hired Phil Friske, who has been with Premier ever since.
With Friske on staff, the pair expanded the business quickly, and even took on a few commercial jobs. As the business grew, they soon needed a larger space. As a small-but-bustling operation, they didn’t have time to put their many projects on hold, when they found their current location.
“We were in here at night tearing stuff out and getting the shop set up,” recalls Friske, who has, over time, transitioned from shop supervisor to draftsman and machine programmer.
Twenty years later, the crew has expanded to 14, and work has gone from local to international. Last year, Premier Woodwork designed and created a kitchen, bar and bathrooms for a home in St. Kitts, in the Caribbean. Kruschke admits that was one time when he wanted to personally deliver Premier’s work, but his commitment to quality kept him close to home.
“Everything goes through me that goes out of this shop,” he says proudly.
When Premier began in 1994, its business all came through word of mouth. The crew of two would create a custom kitchen design, and soon the phone would be ringing with new customers who had seen their work. Higher-end residential projects led to business connections and referrals.
Today, the company has carved out a niche creating reception counters, nursing stations and patient rooms for the health care industry, as well as teller desks for banks. Work has included a variety of projects – from car dealerships and work in downtown Chicago, to work for Arizona State University and high-end home projects in Scottsdale.
The team has even taken on historical renovations, like the University of Illinois-Chicago police station, matching moldings to the building’s original design.
“With every project, a part of me goes into it, and I try to make it so the customer is really pleased,” says Kruschke.
Although he is a humble man, Kruschke credits his commitment to quality for keeping Premier Woodwork going when so many similar shops have been forced to close.
Friske has stayed in the industry through two recessions now – one that brought him back to millwork in the 1980s. “The industry has been plagued with a lot of closings,” Friske says. “There have been a lot of changes over the years.
Technology has hugely affected the manufacturing process. It used to be you’d give a man a drawing, but there’s new equipment now, so that it’s all automated.”
Design has changed a lot, too. Dark wood, huge in the 1970s, is making a comeback, Kruschke says. But warming drawers and 5-foot stoves? Those are brand-new trends, but the staff can easily do it, thanks to years of experience doing personalized work.
Component shops have also changed the business, and big kitchen stores have created even more competition.
“But we try to do as much as we can right here,” Friske says.
Although the industry seems to be heading toward quicker work, and away from the careful customization that has been Premier’s cornerstone, quality remains important to Kruschke.
“I always tell people to look at the details – it’s the small details that really matter.”

Kruschke is making big changes in order to expand his company.
“We’ve invested in computerized equipment and cabinet software – where we used to have saws, we have a computerized router that does all the cutting,” he says. “We’ve taken the steps to keep up with the times.”
It hasn’t always been easy to find good employees, Kruschke and Friske agree, because they need workers who can see a project through the entire process. Over the past few years, a solid crew has gelled and business has continued to grow.
Both Kruschke and Friske talk of a passion for their work. Krushcke still wears a tape measure on his belt, and his desk is covered with sketches and drawings.
“I’m always thinking about it,” he says with a smile.
And Friske agrees that Premier has been able to grow because the crew genuinely takes pleasure in a job well done. “You get to create things – concrete, tangible things, and you get to see results every day,” he says.
He adds that, for years, he enjoyed driving past a building where he did work, and showing it to his kids.
Customers seem to appreciate that commitment. Many times, the Premier crew has been invited back to a home for a thank-you party, says Friske.
“It’s always challenging, but it’s been exciting growing with the company and seeing how things have changed.”
Another big change might be right around the corner.
Kruschke is considering looking for a larger space and may even create a showroom to display samples of Premier’s custom work.
But even if the building gets a little more glamorous, Kruschke promises not to lose the core business theory that has worked so well over the past 20 years.
“Our philosophy is to be honest and do things at a fair price and focus on quality work,” he says. “And I don’t like to brag, but I’ve heard we’re one of the best.”