She’s performed at the White House, played with countless celebrities and taken the stage at Carnegie Hall, yet Rockford resident Emily Bear is still just a friendly, warm-hearted girl next door. 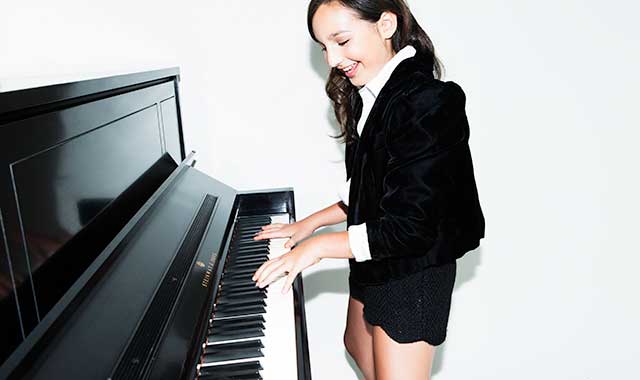 Rockford resident Emily Bear has experienced things that most of us only dream about.
Emily is a pianist and composer who’s equally comfortable playing jazz or classical music, and is recognized in both worlds, which is extremely rare. She also enjoys playing her own compositions.
At just 12 years old, Emily has performed all over the world. She’s played for heads of state; performed at international festivals; entertained thousands of fans at some of the most iconic venues in the country. She’s recorded six albums of her own material. She’s appeared at Carnegie Hall, on national television programs, and been interviewed by some of the most well-known journalists in the world. And, she’s closing in on 15,000 “likes” on her Facebook fan page.
Not too shabby for a girl who won’t even be a teenager until August.
But to know Emily-the-performer is also to know Emily-the-bright-eyed-girl, who enjoys goofing around with friends and doing handstands in her living room as much as she enjoys thrilling fans with her amazing talents.
“There’s a fluidity and elegance with the way Emily moves and deals with people,” says one of her teachers, Dr. Ron Sadoff, chair of the music department and director of film scoring at New York University’s Steinhardt School. “Still, Emily’s an absolutely normal kid. She’s very organic and very natural. She’s comfortable in her own skin.”
The word that comes to mind when people talk about Emily is “prodigy.” It’s a description, however, that makes her slightly uncomfortable.
“I don’t think it really describes me correctly,” she says. “I’m just myself. I play the piano and I compose. Sure, I travel a lot, but it’s no big deal. My sister and my friends certainly don’t think it’s a big deal.”

Head of Her Class