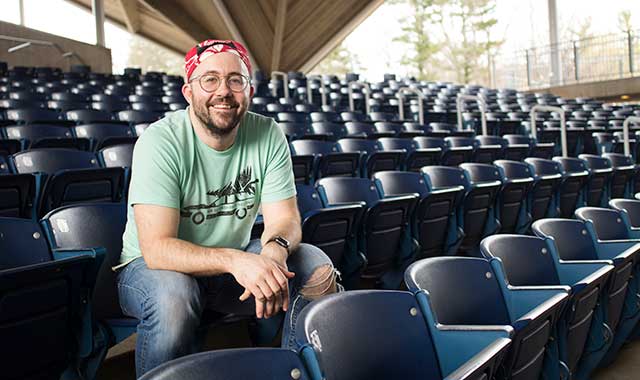 
We’ve all heard the story of Rudolph’s red nose, and of St. Nick’s night before Christmas, and Charlie Brown’s sad little tree, but have you heard the one about Snowfall the snow sprite?
It’s one recently published in a collection of Christmas tales by local writer and Northwest Quarterly contributor Toni Rocha. Her new book, Magic in the Air, presents four December stories that she’s published, over the years, in a serial format for the Beloit Daily News. For each of the past nine years, Rocha’s stories have been published chapter by chapter for about 20 days in a row. Each tale recounts the Christmastime adventures of Cindy and Bobby, two modern kids in an unnamed Wisconsin village.
“Every Christmas, weird things happen,” Rocha says. “It starts with Aunt Tilly’s visit. At first, Bobby doesn’t like having his weird old Aunt there, but as the story goes on, they realize she isn’t just any old lady.”
Rocha’s fun tales are laced with magic. Magic in the Air also includes the tale of Uncle Thaddeus’ haunted clock, Snowflake the sprite’s crystal music box, and Willie Fixett.
“It’s fun to come up with the ideas,” says Rocha, who lives with her husband, Robert, in Roscoe. “I’ve got two boys and I used to read things to them. I used to read Miracle on 34th Street, and other tales. It’s just fun turning your imagination loose and seeing what you can come up with.”
Rocha first started writing as a child, scribbling stories about her classmates. As a teenager, she began working for her mother, Lois Jarley, owner of Jarley Advertising, where she seldom had a chance to delve into fiction while crafting television, radio, newspaper and promotional publishing.
“The closest I got was Rockford Dry Goods,” she recalls. “I used to write the copy for a newspaper double-truck called ‘We Goofed,’ and they would use it to sell leftover merchandise. They wanted to get rid of it, and so they let me write anything I wanted.”
Ironically, it was another sales opportunity that led to Rocha’s Christmastime stories.
“The Beloit Daily News’ sales department asked if I would write a serialized Christmas story, to be published on a chapter-a-day basis,” she says.
And so it began. Early in 2013, she began assembling the works into a book, which was published independently through Xlibris. Since finishing, Rocha has been promoting it at local book signings and through social media.
“Well-known writers have agents who arrange book-signing tours,” she says. “We unknown writers are expected to find our own way through the forest.”
So far, she’s finding the trail. Magic in the Air is available in hardcover, softcover and e-book format through Amazon.com, Barnes & Noble and several online booksellers. Locally, it can be found at the Barnes & Noble inside CherryVale Mall, Cherry Valley.
Still curious to experience the magic? Excerpted here are Chapters 2 and 3 from “The Crystal Music Box,” one of the holiday stories that appears in Rocha’s Magic in the Air.

“Hey, I’m trying to sleep here.”
THUMP! THUMP!
Bobby sat up in bed and rubbed his eyes. A pulsating silvery glow was coming from his bedroom closet.
“What are you doing in there?” he called out.
A shiny figure poked its head out of the closet and whispered in a tinkling voice, “Shhhhh. You can’t see me. I’m invisible.” It turned around and continued to dig through the closet.
“I hate to tell you this, whoever you are, but I can see you,” Bobby said indignantly. “I can hear you, too.”
“Can not,” it called from the depths of the closet.
“Can too.”
“Can not.”
The bedroom door pushed open and Cindy stuck her head into the room. “Bobby, quit making all this racket and go back to sleep! You’ll wake Mom and Dad.”
“But, Cindy, there’s something in my closet, see?”
“No, there isn’t,” the tiny voice said.
Cindy stepped into the bedroom and carefully closed the door. Frowning, she crossed to the closet and peered inside. Bobby crept out of bed and tiptoed up behind her, peeking out from behind Cindy’s robe. Their eyes widened. There inside the closet was a person barely two feet tall with silky white hair and glittery clothing. At that moment, it shrieked in glee and pulled the silver crank from Bobby’s jacket pocket.
“I found it!” the little being crowed.
“Hey, that’s mine,” Bobby yelled.
“No it isn’t! And just what are you two looking at, anyway? I’m invisible, I said,” the tiny figure proclaimed, hands on hips. Then, with growing dismay, it added, “Oh, dear. You can see me. You really can. Everything is going wrong, just everything.”
And with that, the shining being sat down right on the floor and began to cry.
“Ohhhh, what’s wrong?” Cindy cooed, sitting down on the floor beside the weeping being.
“I tripped on a cloud, and I dropped my crystal music box, and it broke all apart, and if I don’t find it, there won’t be any snow for Christmas,” it sobbed.
Cindy and Bobby sat on the floor, watching as the little shiny person sobbed. Finally, Cindy reached out and patted its tiny hand.
“Don’t cry, we’ll help you find your music box,” Cindy said soothingly.
“You will?” the being said, blinking back more tears.
“We will?” Bobby murmured. “I have a feeling I’m not going to like this one bit.”
“Oh, hush,” Cindy growled, poking Bobby in the ribs. “Now, tell us exactly what happened.”
“Yeah, starting with who you are,” Bobby added.
“My name is Snowfall,” the person sniffed.
“Oh, I get it. You’re a snow fairy.”
“No, silly, I’m a snow sprite,” Snowfall said indignantly. “I was on my way back from a snowstorm conference in the Yukon. I was hurrying because I had the first snowfall scheduled and I needed to get back to my assigned territory in time.”
“Where’s that?” Cindy asked.
“Why, right here. Your village is my home territory,” Snowfall replied. “I just arrived when, out of a clear blue sky, I tripped on a cloud. That is, I think it was a cloud. It might have been a high-flying goose. But I dropped my crystal music box. It fell to earth and shattered, pieces of it went everywhere. I found the ice core right away but the handle and crystal snowflakes were no where to be seen.”
“Until I found the crank,” Bobby pointed out.
“Yes! Let’s see if it’s enough to make it snow, at least a little,” Snowfall cried.
She pulled a glowing cube from her pocket and inserted the crank. The cube began to sparkle inside with tiny white lights. Snowfall gently turned the crank, looking about hopefully. But only a sprinkling of glittery frost appeared from mid-air and fell onto Snowfall and the two children.
“Ooooh, that tickles,” Bobby exclaimed.
Dejected, Snowfall began to cry again. “We have to find the six snowflakes before the music box will make real snow,” she sobbed.
“We can help you find them,” Cindy declared.
“Yeah, what’s so hard about that?” Bobby added.
“They’re nearly invisible,” Snowfall groaned. “They look like clear glass.”
“Oh, brother,” Bobby grumbled. “I just had to ask.”