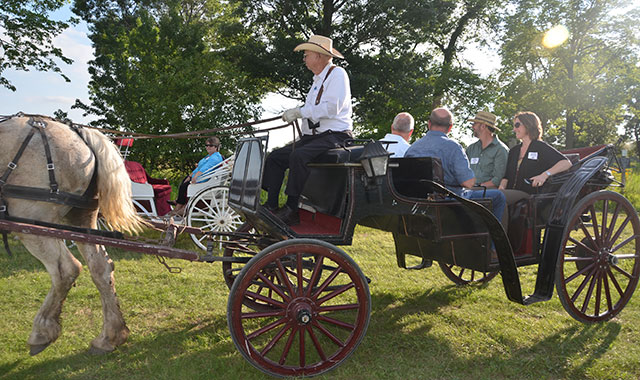 A Night Out to Support Conservation Efforts

“Faith is not something to grasp; it is a state to grow into.”
–Mahatma Gandhi

This area, first settled in 1835, has undergone several name changes. It was first named Coltonville, after one of the early settlers, and then as Brush Point. In 1850, when it was officially organized as a town, it was briefly known as Liberty, reflecting the township’s anti-slavery activism. The name was changed to Mayfield a few months later.
This church began as a Wesleyan Methodist Church, participating in the Methodist Rock River Conference as a stop on the circuit starting in 1845. They met in people’s homes and the local schoolhouse until 1860, when they officially organized. The wooden frame building, still being used today, was constructed at what is now the corner of Church and Aldrich roads.
Its first pastor was a tireless advocate for abolition, and the church became a station on the Underground Railroad.
In 1906, when the church could no longer get preachers from the Wesleyan Circuit, the members changed affiliation to Congregational, and as part of the Congregational and Christian Conference of Illinois, it became Mayfield Congregational Church.
In the 1960s, the Mayfield church joined the Northern Association of Congregational Christian Churches, which eventually became part of the Illinois Conference of the United Church of Christ.
Additions have been made over the years, but the sanctuary stands just as it was built. In March 2012, some time after Sunday service, the ceiling collapsed, causing significant damage to the sanctuary and its contents. Luckily, the stained glass windows remained intact. Members held services at a facility in DeKalb until rededication of the sanctuary in February 2013.
The Rev. Martha Brunell, newly appointed pastor, leads services on Sunday at 9 a.m.

801 Bushnell St., Beloit, Wis., (608) 362-4821, firstcon.org
One of the oldest congregations in the region, when it was established on Dec. 23, 1838, its membership numbered 24, and the group met in the schoolhouse and people’s homes until 1844, when it erected its first church, with seating for 400.
Within 15 years, the congregation needed a larger space, so the cornerstone for a beautiful stone church was laid in 1859. Dedicated in 1862, it had a seating capacity of 1,200.
This church was a major work of architect Lucas Bradley, who used both the Greek and Romanesque revival styles. Considered one of the finest extant 19th century churches in Rock County, it was named to the National Register of Historic Places in 1975.
On a stormy night in August 1998, the church burned to the ground, with damage estimated at $3.5 million; the pipe organ alone was valued at $1 million. Firefighters believe a lightning strike ignited it.
Re-opened three years later, on Aug. 12, 2001, the present church has nearly 60-foot vaulted ceilings and a spectacular pipe organ that serves as the backdrop to the sanctuary. Made in the Czech Republic, the organ is believed to be the third largest in Wisconsin.
This year marks the 175th anniversary of the First Congregational Church of Beloit, and a celebration will be held on Sept. 14, with many activities planned.
Today’s congregation is led by The Rev. Kendall Nordstrum. Sunday service is at 10:30 a.m., with a children’s service for ages 4 and older downstairs at the same time. Nursery care is available for younger children.