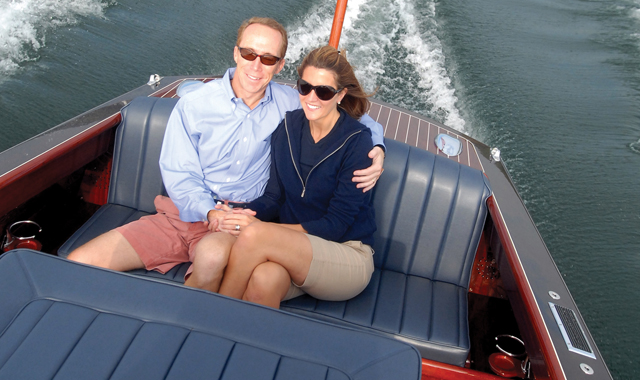 Improving quality of life for U.S. veterans is the goal of Circle of Change, a program that teaches vets how to handle traumatized dogs. Jon McGinty visits some dog training sessions and learns how man and his best friend help each other to heal.


Things aren’t always what they seem. What looks like ordinary dog obedience classes at two local kennels are really part of an extraordinary program of healing and recovery for military veterans. The Circle of Change project pairs vets who have lingering emotional issues with dogs who have similar problems. By learning how to teach dogs to trust and overcome their anxieties, veterans often learn to do likewise.
“We’re here to help the veterans,” says Lou Matjasco, executive director of Circle of Change. “By learning to focus on behavior problems the dogs have, the veterans wind up getting therapy by proxy.”
Matjasco, a retired U.S. Navy captain, and wife Karen, program director, helped develop the project about five years ago, while volunteering at the VA mental health clinic in Rockford. He estimates that about 80 to 100 veterans have participated in the 13-week sessions so far.
“A Vietnam veteran who had PTSD suggested to a therapist at the clinic that having a dog might be helpful to him,” recalls Matjasco. “My wife volunteered to be on a committee to look into programs already out there, but we couldn’t find anything that was both affordable and practical.”
What they did find was a dog trainer who was interested in helping veterans, and from that the program began to develop.
Currently the classes take place in two locations: Dave’s Doggie Den, 107 St. Louis Ave. in Rockford, an evening class, and B & B Canine Co. at 8682 Picken Road in Caledonia, a daytime class. Each group consists of six to eight veterans, one or two trainers, and a few vet mentors – veterans who’ve completed the program and volunteer to help other vets in subsequent classes. The trainers provide the venue and the dogs, which belong to clients who’ve complained about behavior problems that make their pets difficult to handle. Participants may also bring their own dogs if desired, and many do.
“The issues these dogs have often parallel the issues that vets are facing – issues such as anxiety, avoidance, noise and touch sensitivity, fearfulness or aggression,” Matjasco explains.
“The activities we provide depend on which dogs are available, so each veteran may work with a different dog in each class. The dogs vary in breed, age and experience. Circle of Change doesn’t own any dogs. We’re not a dog adoption agency, and we’re not training service dogs.”
The veterans enter the program through referrals from VA clinics in Madison or Rockford (a community-based outreach of the Madison clinic). Most are residents of those communities. They typically suffer the effects of an anxiety disorder such as post-traumatic stress disorder (PTSD), or a traumatic brain injury (TBI). Most participants are veterans of the Vietnam War, some served in Iraq or Afghanistan, a few in Korea or World War II.
“The VA is key to our success,” says Matjasco. “These veterans are already being treated by them, and they determine who could attend and benefit from such classes. They also measure the outcomes of their own therapy, as well as this experience, and so far they like what they see.”
“I’m not a therapist, I’m a dog trainer,” says Vicki Buchholz, co-owner of B & B Canine Co. “But we want the vets to know they have a safe place here. We put all the chairs against the outside walls. We make sure they know they’re welcome to walk around during classes, have a smoke outside anytime. We give them information about how to recognize stress signals in dogs. Dogs have feelings, just like people, and lots of damage has been done to some of them in the past.
“Over time, we all get to see the animals improve, not by intimidating them, but by building trust and being consistent,” says Buchholz. “It’s a give-and-take relationship between dogs and people. Some people just demand things from their animals without giving much back. That kind of relationship doesn’t last long.”
“This Circle of Change program has changed me and my little Khloe,” says Jim Kimbrell, an Army veteran of the Vietnam War. His dog is a Shih Tzu. “When we started, she sat in my lap and shook through all of it. Any loud noise and we both jumped. Now my little Khloe thinks she’s the queen of the kennel. She can pick up on when I get stressed, and she will come to me and want to play.”
As many soldiers did, Kimbrell had a bad experience in the 1970s when he returned from the war. He wouldn’t even tell anyone he was a veteran. “They treat veterans a lot better today than they did for us,” he says. “Vietnam taught this whole country a lesson – Don’t treat vets the way we were treated.”
While the focus is on the dogs, during training sessions, the interaction among veterans is an integral part of the experience for participants.
“We get to talk to other vets, be with each other,” says Dan Harvey, an ex-Marine. His dog, Candie, is a Yorkshire terrier. “I can talk to my wife about things in the service, but she really has no idea about what I mean. When I talk to another veteran, they can understand. For a long time, I couldn’t get personal with people. It just wasn’t in me. The service kinda turned me away from that. Now, this program is bringing me back. I thank them for that, I really do.”

“This program was put together to bring people back out of their shells,” says Harvey. “When you’re in the service, you’re totally with your brothers. We know we aren’t going to harm one another. It’s the same when we bond with a dog. They’ll relate to you in the same manner. Somehow, it healed me in a lot of ways, having Candie’s love and respect, knowing she will never turn on me.”
Ralph Timbush, Jr., served in the Marine Corps during the Cold War era. Timbush and his wife, April, are both volunteer mentors, the only husband and wife duo in the Circle of Change program. April was in the Air Force for more than 12 years, including deployments in the Middle East. While serving in Jordan, she and two other women were captured by terrorists and held for five days until rescued. Ralph’s dog, a Blue Healer named Speckles, came to him from a family who couldn’t tolerate her high energy level.
“Before I got Speckles, I was in a depressed mood 24/7,” says Timbush. “Now, she’s my shadow, and she gets me out of the house about every two hours, trying to burn off her energy. We have a great time.”
Christopher “Tank” Marron is a Marine veteran of the war in Iraq, where he served four combat tours. During his last deployment, he was thrown from a vehicle when it hit a roadside bomb, and suffered a traumatic brain injury (TBI) as a result. His dog, Diesel, a pit bull, is also a veteran of that war, and was used to detect explosives. Tank and Diesel have been together for five years.
“Diesel is a service dog,” says Marron. “Because of my TBI, I’ve had some balance issues. When I lose my balance, I can pull on his lead and straighten myself out. And because of my PTSD, I don’t like anyone to get too close. So Diesel always walks in front of me, rather than at my side. It helps keep people at a distance. In the beginning, we both were sensitive to sounds and crowded places. We sensed each other’s anxieties, and worked together to get over them.”
Marron appreciates the camaraderie which participation in Circle of Change provides.
“It helps my overall morale,” he says. “We get to hang out with other veterans. Even though we’re from different eras, we have a pretty good idea what everybody went through. It’s almost like being back in the service. Coming here and working with the dogs and other vets helps us all to overcome fears or other issues. It sure brought me out of my shell.”
Jim McPherson, a Vietnam era veteran, doesn’t own a dog yet, but plans to someday soon. His children are grown and he lives alone.
“At this stage of my life, I don’t want to leave a dog home alone by itself,” says McPherson. “There will come a time when I’m ready to adopt one, and this experience will be useful. I wasn’t sure what to expect here. I’m still on my healing journey, and I wanted to experience what is healing about the program. I’ve gone through a pretty down period in my life in the past few years. I probably wouldn’t have attended this program a couple of years ago. I didn’t want to come out and meet guys. Now, I look forward to coming here.”
Trainer Dave Schnidt, owner of Dave’s Doggie Den, has taught McPherson and others about different types of dogs and their personalities, as well as how to go about training and working with them.
“Dave is very insightful and knowledgeable,” says McPherson. “I’m amazed at what you can teach a dog if you know what you’re doing.”
Schnidt is a former on-street dog trainer for the Chicago Transit Authority police.
“I told the vets, ‘The difference between me and you is, when I got shot at three times in one week in Chicago, I quit. You guys couldn’t do that.’”
Schnidt’s father was a tail-gunner in a B-17 during World War II, and was shot down twice.
“He never talked about his experiences,” recalls Schnidt. “I know he had PTSD. When I see positive changes in the vets in my classes, it makes me feel good because of my dad’s experiences.”
“The focus is on the veterans, but the classes are just plain dog training and handling experiences,” says Matjasco. “It’s a very low-cost approach to providing positive experiences for veterans. The VA has admitted it can’t take veterans beyond just stabilizing them. This program takes them beyond, and brings them to a higher level. It gets them out of themselves, thinking only of their own issues. They begin to realize, ‘If I’m going to expect this dog to respect me, then I have to do something different than I have been.’ Then the veteran himself becomes an agent of change.”
Circle of Change is a non-profit organization which provides these classes free of charge to qualified veterans. It’s run by volunteers, including the Matjascos, and only the trainers are paid. The organization solicits donations from social service and veterans organizations and individuals. For more information, or to make a donation, go to its website at www.circle-of-change.org.
Tags: circle of change dog dog training jon mcginty military soldier veteran veterans
Share on
Share on Facebook Share on Twitter Share on Pinterest Share on Email
NWQ Staff July 1, 2013