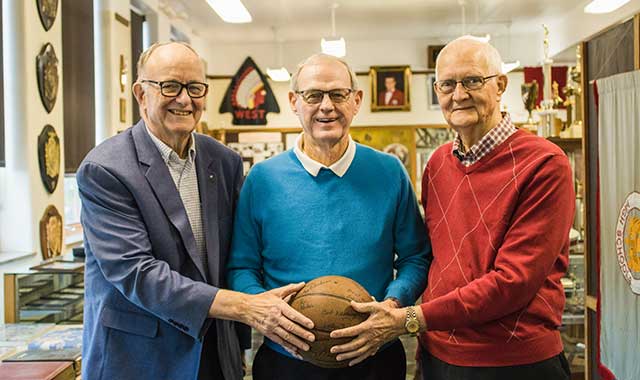 
When Igor Stravinsky’s ballet “The Rite of Spring” opened in 1913, the Paris audience was so startled that a near-riot broke out. It’s a jarring story of pagan ritual and sacrifice, made even more unsettling by the complex, avant-garde score.
The unsuspecting crowd was witnessing the first shot fired in an artistic revolution – a break from the romantic past to something much more complex and unresolved.
A century later, Matthew Keefe wasn’t looking to start a riot with his original interpretation of Stravinsky’s masterpiece. He did want to shake things up a little, though, evoking elements of “Romeo and Juliet,” “The Lottery” and even “The Hunger Games.”
“Rite of Spring” was the final act of the Rockford Dance Company’s April 13 “Bold Moves” performance at the Coronado Performing Arts Center. Keefe, 45, the company’s artistic and school director, paired his dancers with Rockford’s hip-hop dance team, Fatally Unique. Business suits replaced Russian peasant garb. Stravinsky’s familiar scenario unfolds: two opposing groups, and a mysterious annual ritual requiring a human sacrifice for a supposed greater good. But, Keefe’s version ends with a hopeful twist. Tragedy is averted as the groups realize their attitudes need to change.
In conversations after the Coronado’s lights came up, audience members offered varying interpretations. Some saw City Hall. Others saw black and white. Others saw Rockford in general, and a struggle between past and future.
Those were exactly the types of post-performance conversations Keefe wanted, and they encapsulate part of his vision for Rockford Dance Company: to tell stories with a higher purpose. To wordlessly ask questions and put forth ideas.
“It’s a risk. It’s about getting the community to start embracing these new things as well as the old things,” he says. “I want to engage people in conversation about it. But I want to answer questions like a lot of artists do – What do you think it means?”
Keefe co-choreographed “Rite of Spring” with Fatally Unique leader Prince Alonzo Russell. That required buy-in from both sets of dancers, about blending two very different styles on the same stage.
“It took a while,” Keefe says. “I can’t say, that when I first announced this, people were jumping up and down. They were sort of like, ‘Great. That sounds … interesting.’
“The artists are all equal. Whatever style of dance you do, whatever part of town you live in, none of that matters. We come in here, we work together.”

Keefe and his wife, Brittany Fridenstine-Keefe, both career dancers, moved to Rockford from New York City in January 2012 for Matthew to direct the Dance Company and its school. Brittany serves as school coordinator and directs the Junior Company.
Their friends thought they were crazy – until they took a closer look. The director of the dance company Keefe once worked for in Princeton, N.J., visited last year.
“He says, ‘Matthew, I’m mad that you left, and I really miss you a lot, but I completely understand why you did,’” Keefe remembers. “And I said, ‘Look at what I have: five studios, dressing rooms and a gorgeous theater where I get to do shows.’”
He calls the dance facility, located in the Riverfront Museum Park, the best in northern Illinois.
“There are studios in Chicago that don’t have half of what we have. The potential is huge.”
Performances are what most of the community knows about the Rockford Dance Company. But if you really want to get a feel for the place, show up at 9 a.m. on a Saturday.
“It’s bonkers,” Keefe says.
Narrow hallways swarm with kids, parents and teachers. Five dance studios have classes going. Every observation room is packed; parents watch their kids’ classes through one-way mirrors, all the time talking with one another. A community develops.
Before classes start, Keefe likes to walk the hallways and talk with parents. Inevitably someone has a question or a comment, and he values that time to connect.
This year, the school has 297 students, says executive director Cindy Jo Savitski-Lantz. That’s just short of its goal of 300, but an increase of almost 70 from last year. Credit a new syllabus and new teaching methods, plus marketing and word of mouth from parents.
“We have high expectations of growing the school, in every aspect – the children’s division, student division, open enrollment and the wellness center,” Lantz says. “So we have laid out a clear vision for each that includes growth in numbers and continued education for our teaching staff. We must continue to pursue the excellence mentioned in our mission statement.”
Keefe thinks of the school as a pyramid, with a few upper-level dancers at the top, but 3-, 4- and 5-year olds – the biggest constituency – as the foundation for growth. So, he and Brittany have spent considerable time developing a syllabus to teach creative movement: hand-eye coordination, balance, strength, agility.
“Our goal at that age is not necessarily to train them to be ballerinas,” Keefe says. “It’s developmental creativity.”
That includes a literature component – telling stories that have movement themes, and then asking, “How can you move like this character in this book?”
Meanwhile, parents watch closely and form a little community of their own.
“For me, the strategy is that those parents are very involved,” Keefe says. “Hopefully they can say, ‘My children are at Rockford Dance Company and are learning amazing things. They’re being introduced to dance and so much more.’”
As Keefe’s vision goes, the pyramid eventually becomes a skyscraper, with large numbers of dancers at all levels, from preschool to post-high school. He knows some kids eventually will choose sports, or music, or other activities. But the stronger the foundation the school can provide, the longer more kids may stick with dance.
“What we’re teaching with dance is one thing, and there’s a lot that comes out of that – gratifying things,” he says. “But it all starts to breed a lot of really amazing life skills. Working hard, working in a team, effective communication, the ability to take criticism, the ability to develop higher standards.”

For younger students, the class commitment is one to two days a week. Older students attend class up to five days a week – four weeknights and Saturdays. For girls, especially, the class frequency is about maintaining a high level of fitness so they don’t injure themselves once they’ve moved to pointe technique – supporting all of the body’s weight on the tips of the toes.
Keefe says going en pointe represents the Holy Grail for female dancers. The school follows high standards, including physical tests, before a dancer receives pointe shoes – often between ages 11 and 13. That can get competitive, and not just with the students.
“There are plenty of parents I’ve seen come through here, and because we felt their child was not ready for pointe, they just took them to another school,” Savitski-Lantz says. “That’s how important these standards are. Pointe can lead to injury as adults, if they don’t have the core strength to do the work that needs to be done.”
And then, for the older, performance company, add the idea of collaborating to create something new artistically.
“It becomes a work in progress and we all feel invested in the outcome. So, everybody has a sense of buy-in and ownership of the process.”
Adults take classes, too – most often through an open enrollment program that doesn’t require a semester-long commitment. Offerings include ballet, contemporary/modern dance, tap and Gyrokinesis – an exercise form for which Brittany is a certified trainer.
The adult tap class meets three mornings a week with 16 to 18 people, mostly senior citizens.
“They just love it,” Keefe says. “They’re enthusiastic. We have a wonderfully inspirational teacher (Theresa Sinks). And they’ve now started going out into the community and doing performances.”

Particularly during the weekdays, studio space sometimes sits vacant. Keefe sees opportunity there. Might dance company directors see the same advantages that his former Princeton colleague saw? Companies could use Rockford Dance Company as a creative retreat site, to develop new material.
“Space rental in a bigger city is expensive,” he says. “Can we develop a model where we could bring groups here for a week, two weeks, a long weekend, whatever? Focus and develop your new work, and in exchange, we will create some opportunities to do work in the community. We would ask that people do a showing, or premiere their piece here, so we can put a stamp on it, ‘Made in Rockford.’”
Planned for this fall is an associate internship program, aimed as a bridge between dance schools and professional careers.
“I see a lot of dancers move to Chicago or New York, get a job waiting tables or whatever, bunking up five to a studio apartment, and trying to take classes,” Keefe says. “We can tell that dancer, ‘Come here. Be an associate member of our company.’ So this person is now working with us. They’re a semiprofessional or professional-quality dancer. As a choreographer, I can use them in soloist and principal roles.”
Interns also could teach classes, and do outreach work in the community groups – basically, learning marketable skills revolving around their future dance careers.

Outreach is a huge part of Rockford Dance Company’s mission. That takes many forms, often with teachers and dancers doing educational events in schools and in agencies as varied as the Barbara Olson Center of Hope or the Rockford Rescue Mission.
Keefe also foresees the Company as a cultural export of Rockford. He’d like to get the dancers touring regionally in places like Chicago, Madison, Milwaukee or Minneapolis.
“I think if we can raise the work, create the excellence that I want to create in our work, audiences are going to want to see it,” he says. “I really want Rockford Dance Company to be known as one of the premier youth dance companies in the country.”
In the process, helping other communities to embrace Rockford’s cultural assets can help the city fight its image problem, Keefe says. As a small city with a symphony, live theater, dance and renowned museums, Rockford offers more access to culture, proportionately, than most big cities.
“You can get a lot of what you’re looking for right in your own backyard,” he says. And I don’t think that story’s being told enough.”
To that end, Keefe has spent his early months in Rockford getting to know the business and political communities. Part of that, of course, is fundraising for the not-for-profit Company. But it’s also being an evangelist for the arts and their impact on everything else.
“The cultural sector is just as much a part of the fabric of the community as Hamilton-Sundstrand is,” he says. “People who consider moving here can see that Rockford has rich cultural offerings. That’s an incentive to bring their families into our community.”

The April 13 “Bold Moves” performance embodied Keefe’s creative energy and passion to push the dance company into a new era.
“I’m all for Sleeping Beauty and Cinderella,” he says. “Those are wonderful productions. But, I’m also, as an artist, trying to do new ballets. I want to tell new stories. We need to move the art form forward or we’re going to be a museum.”
With he and Brittany expecting their first child this summer, Keefe also is thinking beyond dance, to what it all means for Rockford’s frequent self-loathing.
“It’s getting people to change their mindsets,” he says. “And as our community evolves, the older generation passing the torch to the younger generation, I see some people of my age who are choosing to stay here, choosing to invest in this community, who want it to be a place they want to raise their kids and have fun.”
It’s easy to imagine that Igor Stravinsky is nodding his approval.