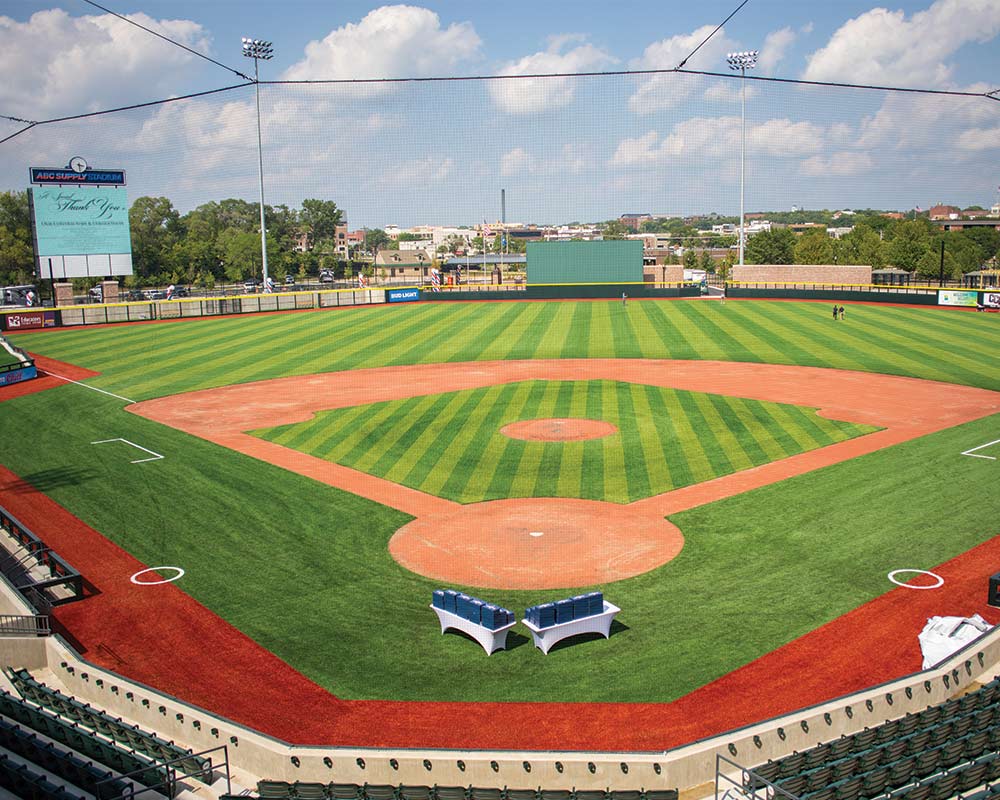 Meet a family whose innate dog-handling skills have kept happy customers coming back for more than a generation.


This “tail” shows how a case of puppy love can grow into a doggone successful enterprise.
Kent and Gwen Meyer, husband and wife, own and operate Meyer’s Tails Up Farm, 5390 Irene Road, Belvidere. It was established by Kent’s parents on Shaw Road in 1970, and moved to the current location in 1986. Kent began managing the business in 1989, and he and Gwen purchased it in 1996.
Last year marked Meyer’s 25th year on Irene Road. During that time, the facility has grown significantly, both in scope and service. The main facility has been expanded and remodeled; a second building, to accommodate training, has been constructed; an above-ground pool for aqua-therapy has been installed. The rural setting features fenced-in space for supervised off-leash romps and paths for leashed nature walks.
The facility offers overnight lodging and grooming in one building, and doggy day care and training in the other. There’s also a retail space, stocked with everything from designer leashes, all-natural pet treats and breed-specific people gifts, to specialty dog shampoos, therapeutic beds and aromatherapy diffusers.
The customer base has grown almost exponentially since Kent and Gwen took over, and clients just keep coming.
“In 1996, we acquired another full-service facility in DeForest, Wis., and in 2000, we opened Meyer’s Canine Colony in Roscoe,” Gwen says. The Roscoe location provides grooming and a gift shop, and also serves lodging customers who live too far north of the Belvidere location.
“Meyer’s Canine Colony was actually an idea from one of our clients,” Kent says. “Three of our top 10 customers were from Roscoe, and one asked if we’d ever consider opening a location in the Roscoe area.”
But Meyer’s isn’t just about pampering pooches and indulging owners.
“We teach people to understand what their dogs were bred to do and how they take in information differently than humans,” Gwen says. “We want people and their pets to have good relationships, and we want dogs to have the best quality of life they can.”
The success of this 42-year-old family-run business comes from a deep love and understanding of man’s best friend, passed down through a long line of champion dog breeders and trainers.
A third-generation dog handler, Kent grew up in the business, with grandparents who raised Boxer show dogs and offered training in the community. Their legacy lingers.
“We started an obedience class recently at the farm, and a man there told us that he took a class from Kent’s grandmother, Loraine Meyer, 40 years ago,” says Gwen. “She’s now 92, and she still has a bag of tricks for solving problems with dogs that just amazes me.”
In addition to teaching obedience classes, Loraine served as an American Kennel Club judge for 50 years. “She didn’t quit teaching until age 88,” says Kent. “Very few judges stay in it that long.”

Kent’s parents, Brian and Cindy, were apprentice handlers when they met. They finished their apprenticeships, married and began to breed, train and show Rottweilers, as well as handle show dogs of all breeds from across the country.
“I attended dog shows every weekend, from the time I was little until I was a junior in high school,” Kent says. “I got my first show dog when I was 8 years old, a Whippet named Louis.”
Gwen became interested in dog handling at age 9, after attending a dog show in Milwaukee, where she fell in love with an Irish Setter. When old enough, she began volunteering for the family pet’s veterinarian; she got her first show dog when she was 13. The pair met while participating in junior showmanship competitions at dog shows. Kent was 16; Gwen was 15.
“That’s the last time I ever beat her in the ring,” quips Kent. They dated off and on but lost touch when Kent stopped attending dog shows and went off to college to study government.
“That experience made me know that the family business is what I wanted,” Kent says. His parents were running the facility, and he returned to help them, managing it for seven years.
By this time, Gwen was 22 and apprenticing for a handler at a show in Illinois, which Kent happened to be attending. “We exchanged numbers but didn’t get to really catch up,” Gwen says. “He called that night. I was really happy to see him, but I didn’t expect to hear from him that soon. That was when I knew that he was still interested, too. We were married just a few years later, almost 10 years to the day we met.”
That was the year Kent’s parents sold the business. “We came into it at a good time,” says Gwen. “In 1996, we were 25 and 27, with energy and ideas. Because he’d been running the facility for seven years, people knew Kent and customers recognized him. And between us, we have a broad base of knowledge about dogs. Mine is learned. His is innate.”
But the main key to their success, the owners insist, is their staff: 35 employees among the sites, including two award-winning groomers and an apprentice program for training groomers.
“A lot of people think we’re in the dog business, but we’re really in the relationship business and we hire for customer service, not necessarily for skill,” Gwen says. “We pick for who, and then develop their skills, based on their personality traits. The staff is diverse, from college age to second-career retirees, and everyone brings something to the picture. We rely on staff to carry through with customers, and we’ve developed quite a few new concepts from staff ideas.”
Most of their employees are approaching the 10-year mark at Meyer’s Tails Up Farm, and the owners attribute their longevity to the culture of the company.
“We try to continue to educate our staff, so that they can speak to customers from a solid body of knowledge,” Gwen says. Lodging and grooming departments have monthly meetings, and managers and customer-facing staff meet more frequently. “Every year, we go on a managers’ retreat off-site, usually for three days, somewhere like the Dells. We’ve been doing that for a few years now.”
“Some of our peers can’t believe we do it,” Kent says with a grin. “We tell them we’ll be unreachable because of our annual retreat, and they say, ‘You still do that? Is that really necessary?’ And we say, ‘It’s absolutely necessary.’ It’s great for building relationships, and we come away with some pretty good ideas, too.”
In 2009, Gwen was named among the top 40 leaders under 40 in Rockford. Themselves skilled groomers, trainers and handlers who breed, train and handle their own Soft Coated Wheaton Terriers, Kent and Gwen’s skills are in demand across the country. In addition, they keep up on their own continuing education and training – everything from new dog foods and diets to show cuts and grooming products.
The legacy seems destined to continue. The Meyers’ three-year-old son, Luke, visits the farm and groom room often, and is growing up with Wheatens, a Bouvier des Flandres, a Norfolk Terrier and a Whippet. “It was really interesting watching him walk the Whippet on a leash the other day,” Gwen says.
Meyer’s Tails Up Farm advertises using print and broadcast media, but the owners say most of their business comes from repeat customers and word-of-mouth recommendations. With the quality of service this family-run business gives its clients – both the two- and four-legged kind – that’s not surprising. ❚
Tags: belvidere dog kennel meyer's tails up farm meyers kennel pet roscoe
Share on
Share on Facebook Share on Twitter Share on Pinterest Share on Email
Karla Nagy May 24, 2012