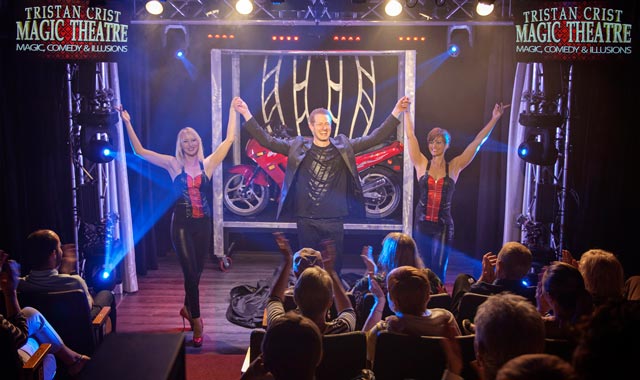 The Best of Lake Geneva

Get a sneak peak at this year’s outstanding lineup at Music by the Lake, in Williams Bay, Wis. Hint: Includes instrumentals, musicals, vocalists and something that rhymes with Jeep Brick.


As expected, Music by the Lake has secured a stellar lineup of talented and diverse performers for its 2012 season.
The popular summer music series is held on the campus of George Williams College (GWC) of Aurora University in Williams Bay, Wis. Over the years, it has hosted such headliners as Maureen McGovern, Brian Stokes-Mitchell, The Kingston Trio, Kenny Loggins, The Irish Tenors and Peter Frampton. Under the leadership of Executive Director Christine Flasch, now in her 12th year, it continues to attract well-known national and international performers.
Flasch barely took time to savor the success of last season, which ended in August, before she began working on this one.
“I started searching in September, using the list of requested performers we get from our patrons and supporters,” she says. “Also, through the course of the year, other performers are brought to my attention through PR firms. Once I start sending out requests, I spend many sleepless nights, waiting to hear back from agents.”
Top talent gets top dollar, and handling dollars wisely is always foremost in Flasch’s mind. “We’re committed to keeping ticket prices affordable, while bringing the highest quality music to our audiences,” she says. “Aurora University and its president, Dr. Rebecca Sherrick, have remained committed to keeping ticket prices affordable for a broad base of the concert-going public.”
But landing a certain act or artist isn’t always about the fee. Performer contracts contain riders – certain stipulations – that must be met or carefully negotiated.
For instance, Music by the Lake’s venue is the open-air Ferro Pavilion, designed specifically for concerts. Dressing room facilities are located up the hill from the venue, in beautiful Brandenburg Hall, not in the theater itself. It’s a comfortable place to relax, have dinner and dress before the performances. But agreement must be acquired from agents before arrangements are solidified. Flasch must also deal with concert riders that might involve, for instance, providing a certain kind of instrument or specific brand of food or beverage.
“Performers are quite demanding that every request is satisfied as stated in the contract,” says Flasch. “We work very hard to follow every directive to the letter, making fitting substitutions, as needed. Every detail must be confirmed in advance.”
In addition, performer availability can change suddenly, so Flasch must always have what she calls “an excellent Plan B, and even a Plan C.” But after 12 years, she knows to be prepared.
“It’s been pretty crazy for several months leading up to now,” Flasch says. “It’s like spinning 17 plates at once with one hand, and juggling with the other, making sure you don’t drop anything! When the season was confirmed, I was very satisfied with the outcome.”
Kicking things off on July 7 is Steve Lippia, in “Simply Sinatra.” This popular singer, backed by his own 16-piece orchestra, performs all of Old Blue Eyes’ hits. “He looks a bit like Harry Connick, Jr., and he’s got the smooth style of Sinatra,” says Flasch.
The second concert is a double headliner of two tight harmony groups from the ’50s. “The Lettermen are always at the top of our request list, with great songs like ‘Goin’ Out of my Head’ and ‘When I Fall in Love.’” says Flasch. “Then, a former president of GWC has always wanted The Four Freshmen. The two groups will perform separately, and come together for the finale, to sing The Four Freshmen’s biggest hit, ‘Graduation Day.’ That’s going to be a great show.”
Next up is Music in the Air, a 1930s Jerome Kern/Oscar Hammerstein musical that few people know of, but which has Flasch very excited. The plot involves a group of provincials from a small Bavarian village who head to the big city of Munich, to assist their aging music teacher in getting a song published. Of course, their homey rural values clash with the urban cynicism of the people they meet.
“Harry Hartshorne, Jr., one of our underwriters, has been asking me to do this show for years,” Flasch says. “In September, I flew to the Lincoln Center Library and viewed a 1990 revival, and it’s absolutely wonderful! I’m not sure why no one performs it anymore. The music formed the bridge between opera and the musical theater we know today. Act I pays homage to European operetta, and then the show becomes very Cole Porter.”
Flasch’s biggest challenge involved casting. “The show requires two large choruses, a chorus of young girls and four 60-something-aged gentlemen in key roles,” she says. “I went to Actors Equity in Chicago, and a week later was viewing eight electronic auditions and several in-person readings, all of them fantastic.”
At press time, she was still negotiating to cast the all-important lead, Dr. Walther Lessing. In the other three roles are Chicago Shakespearean actor Larry Yando, versatile stage and screen performer Charles Stransky, and actor/musician Steve Malone. Favorite Chicago soprano Alicia Berneche and New York City-based baritone Christopher Burchett round out the lead characters.

“This cast will bring new life to this lovely piece,” says Flasch.
Directing is New York City producer/director/choreographer Greg Ganakas. “Greg built the musical theatre program at NYU, so he understands our mission of developing emerging young performers through their working alongside top professionals,” says Flasch. “He’s known for his respectful, award-winning revivals of older musicals, so he’s the perfect choice to help revive Music in the Air.”
Returning for the second season in a row is popular singer/songwriter Tom Chapin, for the Family & Children’s Concert. “We don’t usually book someone for back-to-back seasons, but Chapin had such a strong response that we’re sure he’ll be a big draw again,” says Flasch.
Dueling pianists Anderson & Roe perform next. “They play an amazing mix of classical, jazz and pop, on two grand pianos nestled together nose-to-nose,” says Flasch. “They have such fun onstage. They’ve been likened to Fred Astaire and Ginger Rogers at the keyboard.”
Following Anderson & Roe is a special concert version of the hit musical Million Dollar Quartet, about a recording session with Johnny Cash, Elvis Presley, Carl Perkins and Jerry Lee Lewis. “This special concert version from the producers captures all of the great music in the show,” Flasch explains. “I saw the full musical when it played in Milwaukee, and it’s fantastic.”
The Pritzker Spotlight Concert closes the season with Rockford’s own hometown boys, Cheap Trick. “What a great way to wrap things up,” says Flasch. “I expect these guys to bring down the house.”
Visitors attending Music by the Lake may rent rooms overnight on the GWC campus, some with porches overlooking beautiful Geneva Lake. A $2 million renovation and expansion of the school’s historic 1926 Mabel Cratty Hall has been completed, and the Prairie-style building, adjacent to Ferro Pavilion, will be open for tours. Also, shopping and fine dining experiences await in Williams Bay and nearby Lake Geneva.
“I think this is going to be the best season ever, but I say that every year,” Flasch says with a laugh. “Last season was our most successful financially, and we’re hoping to do even better this year. We’re committed to providing an incomparable musical experience while keeping the concerts affordable for everyone.”
Music by the Lake audiences can choose seating on the lawn (bring your own seats), on the uncovered terrace, or under the pavilion, in dress circle, orchestra or rear orchestra sections. Season ticket packages and single tickets are available online at musicbythelake.com, via email to mbtl@aurora.edu, or by phone at (866) 843-5200.