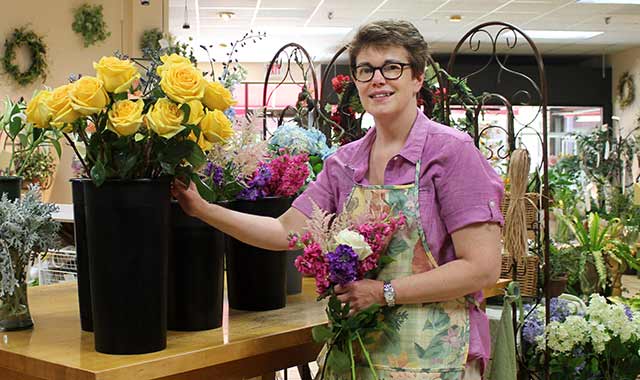 Six years in the making, ‘Many Faces, One Nation,’ places visitors in the shoes of immigrants who have helped to build Rockford. Learn how the exhibit came about, and what startling facts its curators uncovered.


Imagine stepping off the train and seeing Rockford for the first time. Your posessions fit into the suitcase you’re holding. You have no home or job lined up. Your family lives across the world, you don’t speak English and you’ve never experienced a cold winter.
Do you feel afraid and homesick? Or overjoyed to be starting a better life than the one you left behind? Maybe both. You might be a Swede arriving in 1850; an Italian in 1900; a Rwandan in 2000; a Mexican in 1990. Or, you might hail from most any other part of the world.
Helping people to better understand the experiences of Rockford’s immigrants over the past 160 years is the goal of a major new exhibit called “Many Faces, One Community.” It’s the largest undertaking to date of Midway Village Museum, 6799 Guilford Road, Rockford.
“One of the most amazing things to me, as we worked on the research, was just how many countries people came from and how long ago,” says Laura Furman, curator of collections. “For example, there was a Chinese laundry on 7th Street in 1900. That there was any Chinese population here in 1900 hadn’t even occurred to me. And that’s just one example.”
Regardless of where they came from or when, their reasons for coming were strikingly similar. “They all wanted better lives, better job opportunities, a better future for their children, maybe the chance to own some property,” says Furman. “In some cases, they were escaping danger. Some Swedish immigrants rode the train out of Chicago in the 1850s, before the line to Galena was completed,” Furman explains. “Rockford was the last stop, and some folks just got off and stayed. Much more often, though, they’d heard from relatives or friends that Rockford was a good place to find a job and that a Swedish population already existed here.”
Much of the research for the $2.5 million exhibit is drawn from 60 oral interviews conducted with first-generation immigrants or their children, a project begun in 2006. Representing countries from Jamaica to Macedonia, Germany to Vietnam, interviewees talked about the challenges of combining old cultures with new. “One man came here as a child from Sweden,” says Furman. “His parents were all about being American and had taught him to immerse himself in American culture. He said he spent the first 40 years of his life trying to lose Sweden, and the next 40 trying to get it back.”
On Saturday, June 30, from 11 a.m to 4 p.m., the museum will host “A Celebration: Many Faces, One Community,” to mark the completion of Phase I. More than $2 million raised for Phase I paid for design services, building and exhibit specs, construction of the museum addition and two parts of the exhibit. To complete the exhibit, an additional $400,000 is needed.
“It’s a chance to show Phase I to the public and celebrate not only this project, but the diversity of cultures that make Greater Rockford what it is today,” says Lonna Converso, director of marketing. “The new exhibit is very interactive and allows us to rotate and display some of the wonderful artifacts we’ve had in storage for many years.”
The June 30 event will include tours led by costumed interpreters, cultural music and dances, classic games for children, a chance to record your own Rockford roots story, instruction on researching your family tree and the sale of refreshments.
Each attending family will receive a poster designed by renowned local artist Tom Heflin, who will be on hand to autograph copies. The cost of the event is $15 per group/family; $5 per individual; or $4 for museum members.
Much of “Many Faces, One Community” will be housed inside the building addition completed by Cord Construction Co., of Rockford, last year. “Visitors will enter through a train depot, transported back in time, as if they were new immigrants to Rockford,” explains Converso. “They’ll not only learn why immigrants chose Rockford as their new home, but also how those people contributed to the city’s future.”

“Not everyone arrived by train, of course, but it was a fairly common experience,” explains Furman. “Visitors will get a sense of how it felt to settle into a new country. Who helped out the newcomers? How did they deal with language barriers? What kind of discrimination did they face?”
Museum-goers may peak inside suitcases, to see what possessions immigrants brought with them to Rockford. They can listen to excerpts of oral histories and sit down in the Conversation Station to discuss how old cultures were married with new.
Upon leaving the train depot, visitors will move to the other major portion of Phase I, a Swedish furniture factory typical of those which existed in Rockford between 1890 and 1910.
“The city was booming with 100 or so furniture factories in 1900, plus a strong textile industry and factories that made other things, too, like farm implements,” Furman explains. “This is what drew many waves of immigrants to Rockford, and it was very interesting how the factories played off of one another. For example, along with their main products, National Lock and Amerock both adapted their operations to produce hardware that they could sell to the furniture factories here. The city was constantly reinventing itself.”
Visitors can apply for jobs at the factory and may be surprised to learn how their ethnic background influences the process. “For example, if you’re Irish, you might be hired, but your job just might be less interesting and less comfortable than some,” Furman says. Visitors may try out tools of the period and learn about turn-of-the-century working conditions.
Both the train depot and furniture factory were built by Stenstrom Construction, Rockford. Funding for Phase I was secured through a bequest from the estate of Roland and Gladys Olson through the Rockford Park District Foundation; a state grant from the Illinois Public Museum Capital Grant Program; a grant from the federal Institute of Museum and Library Services; and more than $500,000 from current and former Midway Village Museum board members, along with other private donations, including the Gloyd Family Foundation, Bergstrom Inc. Charitable Foundation, Alpine Bank, Janet Kjellstrom, DAO Foundation, Norman and Anne Meyer, SwedishAmerican Foundation, and Tara Blazer. The museum also received a generous anonymous donation and is supported by a grant from the Winnebago County Host Fee Fund.
Furman, who came to the museum in 2006, says the project got off the ground years before her arrival, when the estate of Roland and Gladys Olson donated funds for the preservation of local Swedish heritage. Because the museum didn’t wish to compete with the Erlander Home Museum in Rockford, it decided to replicate a 1900s Swedish furniture factory, “since that was the heart and soul of Rockford’s Swedish immigrant experience,” says Furman. The rest of the project grew from there, and museum leaders later decided to incorporate the experience of all immigrants who settled here. That includes African-Americans who migrated from the South to work in Rockford’s factories, says Furman. “They didn’t come here from overseas, but for the first time, they could choose where they wanted to live and work.”
Split Rock Studios, Minneapolis/St. Paul, was selected to bring the exhibit to life in an immersive, interactive fashion.
“This exhibit really brings the museum up a notch,” says Furman.
Phase II will include an immigrant’s house, with rooms representing different ethnicities and time periods. There will be an 1890s Swedish parlor, a 1920s Italian kitchen and a dining room table with place settings representing various cultures. Phase II also will include two Rockford streetscapes – the South Main Street corridor and 7th Street. “Both are gateway areas to the city which have been handed off from one immigrant group to the next,” Furman explains.
Unlike the outdoor village at Midway Village Museum, where 26 structures represent a typical rural community during the period between 1890 and 1910, “Many Faces, One Community” encompasses the city’s entire 160-year immigrant experience up to the present.
“The city’s immigrant history is an ongoing story,” says Furman. “And over and over again, Rockford has benefitted from the ingenuity and perseverance of the immigrants who came here.” ❚
Tags: heritage history immigrant immigration laura furman midway midway village midway village museum rockford story swedish
Share on
Share on Facebook Share on Twitter Share on Pinterest Share on Email
Janine Pumilia May 24, 2012