Best-selling author and Rockford native Erica Spindler weaves yarns that thrill. Discover what she’s up to now, and how her hometown has influenced her work. 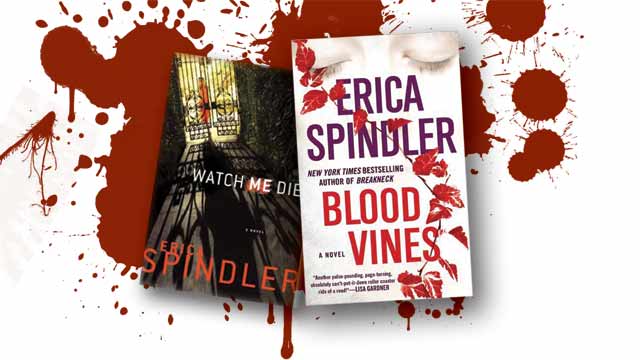 There’s an eerie, dark side to Rockford native Erica Spindler.
More often than not, it surfaces in peculiar thoughts that come when she least expects them. There was that time, for example, when she was driving to preschool to pick up her youngest son and thought: “What if I get there and he’s not there? What if someone has taken him?”
And, there was the time, one hot summer, when she was helping her husband to fix up their old New Orleans home. “He was sweating and carrying a 2×4 up a ladder,” she says. “I was holding the nails for him, when I saw him losing his grip on the board. It fell and hit him in the head. Blood went splattering. I screamed.”
Not really. But it’s typical of the morbid thoughts that dance around in her head like uninvited visitors.
“Why do I do that?” she wonders. “Where does it come from?”
Spindler calls it her dark gift, and she’s channeled that bizarre gift into a successful writing career. A New York Times best-selling author, Spindler began her career writing romance novels, then shifted to psychological mystery thrillers. She has more than a million books in print and has been published in several countries, including Poland, Switzerland and Spain. In Japan, her novel Red was serialized into a successful manga (cartoon) series and converted into a daytime drama.
“I love being able to create something that’s totally my own,” she says of her career. “It’s very satisfying just knowing that people are reading and enjoying my work.”
Spindler has penned 29 books, most with ominous titles like “Blood Vines,” “Last Known Victim,” “Killer Takes All,” “See Jane Die,” “Dead Run” and “Bone Cold.” Two books – “Copycat” and “Breakneck” – were set in her hometown of Rockford.
“I think growing up in Rockford helped shape me and the stories I have to tell,” she says. “It was a very solid, family-oriented, hardworking community. Those things are embedded in me. Rockford has a serious edge and I have a serious edge when it comes to my work.”
Critics describe Spindler’s books as “gripping” and “fast-paced.” One critic described her latest work, Watch Me Die, as “Filled with more twisted, dark paths than an ancient cemetery … a thriller guaranteed to chill your blood and set your teeth on edge.”
Twisted dark paths or not, Spindler describes herself as positive and upbeat. “I’m a typical suburban mom,” she says. “I go to my son’s football games. I go to the grocery store. But I have this dark side where I write books about crime, deranged killers and the cops who are trying to catch them. In every other way I feel I’m a normal person. I’m not sullen or brooding, but I’m always taking something innocent that happens to me and spinning it out into the worst-case scenario. It happens to me all the time.”

From Artist to Writer

Spindler was born in Chicago, but moved to Rockford in the fourth grade, when her father was hired as plant manager for a local manufacturing company. She grew up in Tullocks Woods on Rockford’s northwest side and graduated from Rockford Boylan High School, before moving on to Rock Valley College, where she met her husband-to-be, Nathan Hoffman, in an art class.
Her fondest memories of life in Rockford include hanging out with close friends, driving along East State Street in her VW Beetle and playing in the snow.


“We used to ice skate on a small pond or sled down a hill near our home,” she says. “It was a fun place to live.” Spindler left Rockford for good when she moved to Cleveland, Miss., where she earned a bachelor’s degree in fine arts from Delta State University. She comes back to Rockford a couple of times each year, however, to visit family.
Following college, Spindler and Hoffman relocated to New Orleans, where she was admitted to the fine arts program at the University of New Orleans. Hoffman accepted an advertising internship at a magazine; he now owns an advertising agency.
The couple immediately fell in love with the Crescent City, a place they’ve called home for 30 years. They’ve raised two boys there, now ages 22 and 13.
“It’s a great town,” Spindler says. “I love the sense of history and the atmosphere with the old buildings, the French Quarter and the trees dripping with Spanish moss. Culturally, it’s so much different from the Midwest. It’s a big gumbo of diverse people; the food is great. A Midwest manufacturing town doesn’t have that same kind of atmosphere.”
Spindler credits her successful writing career to a nasty head cold she picked up in the summer of 1982. One day, she stopped at a drugstore to buy some cold remedies, and the cashier dropped a free romance book into her shopping bag. Spindler wasn’t a fan of romance, but plopped down on her couch and devoured the page-turner written by now-famous author Nora Roberts.
She was hooked.
Spindler began reading other books written by Roberts and other romance writers, then tried her own hand at crafting a romance novel. In time, she gave up her job teaching art at a local university, in order to concentrate on writing. “It’s all I wanted to do,” she says. “I became obsessed.”
She spent long days writing and rewriting. She attended writing conferences. She queried numerous publishing agents, only to pile up rejection letters, which she still keeps tucked in a drawer. “I made all the first-time writer mistakes, like using clichés,” she says. “I had no clue at all what I was doing.”
Finally, however, her third book, a romance novel called Heaven Sent, was published in 1987. While she enjoyed romance writing, Spindler ultimately turned to suspense, and that’s where she’s made a name for herself in the world of publishing.

Spindler is a creature of habit.
She starts her writing day every morning around 5 a.m., breaking only for lunch and exercise, before returning to work in the afternoon. She prefers writing in public places, like coffee shops, surrounded by the chatter of others.
“There’s something about being in public that works for me; I can tune people out,” she says. “If I’m home, I’m constantly jumping up to take the dog out, wash a load of clothes or look for something in the food pantry. To me, working in a coffee shop is like going to an office.”
During morning walks, Spindler conjures up many of the ideas that appear in her books.
“Writing is very much a what-if game,” she says. “What if this happened? What if that happened? Some authors are more influenced by stories they read or by people they meet. I’m influenced mostly by things that happen to me, which set off a chain reaction of what-ifs.”
That’s why many of her more recent books showcase New Orleans as a backdrop and incorporate events caused by Hurricane Katrina, which devastated the city in 2005.
It was unfortunate timing that her book, “Killer Takes All,” hit bookstores two months before Katrina terrorized New Orleans. It featured a former homicide detective who finds her friend brutally murdered in her New Orleans apartment. The detective believes the murder is related to the cultish fantasy role-playing game called the White Rabbit.
Spindler felt uneasy about having a new book out that didn’t acknowledge the real suffering that New Orleans residents were experiencing.
“It felt all wrong,” she says. “The landscape of the city had changed. Those characters were real New Orleanians. I felt this real need to pick those characters up and write their story after Katrina.” So that’s exactly what she did in her follow-up book, Last Known Victim, which features Captain Patti O’Shay. When the book opens, O’Shay is grappling with the murder of her husband (and fellow police captain), who was gunned down in the post-storm chaos. She’s working a heinous case when hurricane rescue workers make a grisly discovery – six female hands – at one of the massive “refrigerator graveyards.”
For another book, “Watch Me Die,” Spindler got an idea from a post-Katrina story in her local newspaper about stained-glass restoration. In her book, restoration artist Mira is struggling after losing her husband in Katrina. She manages to stay busy in her work – restoring a church window that depicts Mary Magdalene – until the window is vandalized and a priest is murdered. A strange man called The Preacher attacks Mira in her studio, which sets off a chain of other murders.
Spindler’s loved ones and home were unharmed during Katrina, but her husband’s business suffered extensive damage. The author remains deeply moved by all the destruction that she witnessed. “The after effects of the hurricane are still out there,” she says. “Many people are still recovering.”
Not all of her books are so gut-wrenching to research. Spindler spent considerable time in California researching wineries for her book “Blood Vines,” which involves the mystery of an infant’s remains, discovered in the tranquil wine region of Sonoma.
And she had fun coming home again to research “Breakneck” and “Copy Cat” – books featuring Rockford detectives Kitt Lundgren and Mary Catherine (M.C.) Riggio, who are assigned to track down killers terrorizing the close-knit community of Rockford.
The books offer plenty of references to familiar Rockford sights, including Rock Valley College, Aunt Mary’s restaurant, Rock River Tower and the Rockford Police Department. Spindler says the decision to write about her hometown was not a conscious one.
“I was waiting for the right story to come along,” she says. “For Breakneck, I remember getting a call from a credit card company about a security breach with my card. I started doing research and was blown away by how easy it is to have information stolen. I started thinking, ‘What if you stole the wrong person’s information and it really ticked them off?’ I decided to base the book in Rockford, but I wanted it to have a west-side feel, where I grew up. That’s what I have chiseled in my memory.”
During her research phase for Breakneck, Spindler interviewed Roscoe, Ill., Police Chief Steve Dickson about police procedures. A voracious reader of police thrillers, Dickson had never read Spindler’s work before speaking to her. After reading her work, he came away impressed.
“She has a different writing style compared to other crime writers,” he says. “I’ve read other books that are predictable, but hers aren’t like that. She makes it easy to relate to the characters.”
A typical book, which includes research, writing and editing, takes Spindler about a year from start to finish. These days, she’s busy crafting her next thriller, “Don’t Look Back,” due out in 2013.
Her dark side is undoubtedly percolating once again. ❚