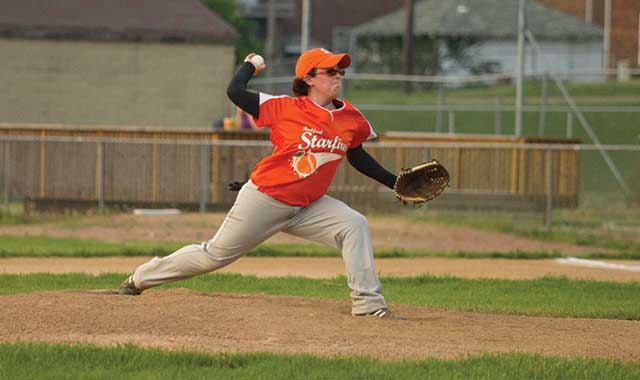 Starfires Playing for the Love of the Game

Restaurant Profile: Meet the real, low-profile personality behind this Loves Park favorite, and discover what makes his restaurant special.


Customers are often surprised to learn there really is a person named “Nunzio” behind Nunzio’s, the popular Italian restaurant located at 5800 N. 2nd St. in Loves Park.
The man is Nunzio Canale, a low-profile Rockford native who’s spent the past 30 years building his restaurant’s reputation, by dishing up good food and good service in a friendly atmosphere. “We’re not the fanciest restaurant around, but I like to think we have some of the best food and the most consistent food,” says Canale. “Our customers appreciate that.”
Canale got an early start, at age 14, when he landed a job busing tables and washing dishes at D’Augustino’s, a restaurant once located at Five Points in Rockford. A year later, he became the cook and kitchen manager at Michael’s, which opened in the D’Augustino’s location.
After graduating from high school in just three years, Canale had a decision to make: attend college or pursue a full-time restaurant career. “I’m only 17. If it doesn’t work out, I can always go to college,” Canale told his father, the late Jack Canale, who had emigrated from Sicily, bringing with him the dream of restaurant ownership.
The Canale family opened Nunzio’s in 1981, and the restaurant quickly outgrew its space along North 2nd Street. Eight years later, a few blocks north of the original location, the family built the handsome brick building that still houses the restaurant today.
Nunzio’s is a family affair that involves Canale’s sister, Jo, and her husband, Silvio, as well as Canale’s two sons, Jack and Joe, when they’re home from college. His mother, Jessie, still helps out by preparing the spices for Nunzio’s trademark meat sauce and au gratin potatoes.
In the early days, Nunzio’s was best known for serving the “cheesiest” pizza in town. While the pizza remains popular, the menu has evolved to include appetizers, salads, burgers, steaks and seafood, along with traditional Italian dishes like eggplant parmigiana and linguine with garlic butter sauce. “Whether it’s a beef sandwich or lasagna, customers always have extra food to take home,” Canale says. “It’s like two meals for the price of one.”
The most popular dish, by far, was dubbed “Steak Sinatra” by customers. It’s a 14- or 20-ounce New York strip that’s broiled, dusted with Dijon butter and bread crumbs, then oven baked. It’s served with a choice of pasta or soup of the day; salad; potatoes or other vegetables; and Italian bread.
“It’s become our trademark,” Canale says. “When I talk to people about Nunzio’s, it’s always the first thing they ask about.”
Customers appreciate the casually nice atmosphere at Nunzio’s. “You can be comfortable here after a baseball or football game, for a nice anniversary dinner, or anything in between,” Canale says. Many a family has celebrated a special occasion at Nunzio’s, from baptisms and birthdays to wedding rehearsals and engagements.
“It’s been satisfying to prepare a good meal and to hear positive feedback from our customers,” says Canale. “There are generations of people who’ve met here and brought their kids and grandkids here.”
Canale describes Nunzio’s as an American Dream come true. “It was started by a father, his son and family, and through many years of hard work, with a devoted customer base and delicious food, it has thrived as a restaurant that can be enjoyed by all. You start out with nothing, and then you nurture it and grow it. It’s been a fun ride. Hopefully, we’ll be here another 30 years.”
Lunch hours are Monday through Friday, 11 a.m. to 2 p.m. Dinner is served Monday through Thursday, starting at 4 p.m.; Friday and Saturday at 5 p.m.; and Sunday at 3 p.m. ❚
Tags: canale illinois italian loves park nunzios pasta paul anthony arco pizza restaurateur rockford
Share on
Share on Facebook Share on Twitter Share on Pinterest Share on Email
Paul Arco October 14, 2011