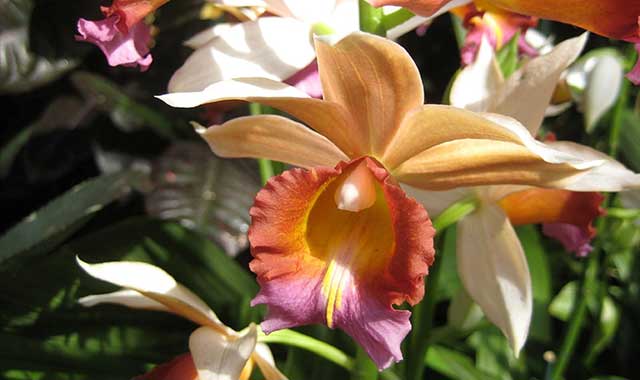 Grow Your Own Fresh Air with Houseplants

The Old Northwest Territory is graced with several groups of dedicated people who take the above quote to heart. Area residents have many opportunities to experience live performances by gifted musicians of fine classical and world music. Northwest Quarterly profiles four of these organizations.

This award-winning regional orchestra will kick off its 77th continuous season on Sept. 17.
“That longevity alone indicates that RSO is something the community values,” says Executive Director Julie McDonough.
McDonough is in charge of administrative operations, overseeing a staff of four that handles funding, public relations (PR), media communications and the box office. Four other staff members, three of them part-time, coordinate the artistic side.
“We get a lot done with a few people,” says McDonough. “Everyone here has a passion for what they do. You can’t work in a nonprofit for the arts without it.”
The orchestra was incorporated in 1943, and has evolved to its current stature under the guidance of only five music directors. For the past 20 years, Steven Larsen has created each program of 20-plus RSO performances and conducted them. McDonough works to fit his vision within the budget.
“Only a portion of our revenue comes from ticket sales,” she says. “Fully half comes from fundraising, conducted in a variety of formats. We’ve gotten a few grants in the past five years from the prestigious National Endowment for the Arts, which are very difficult to earn.”
Along with providing professional concerts to audiences, the RSO is committed to nurturing a love for music in young people. Its educational programs reach thousands of students in seven counties, via school outreach, student concerts and the Rockford Symphony Youth Orchestra (RSYO).
“The RSYO has been providing a high-quality youth orchestra program in the region for 40 years,” says McDonough. “It’s made up of high school students from around the region – Dixon, Freeport, Belvidere, Rockford, Pecatonica, Rochelle. Not all intend to become professional musicians. Through the RSYO, they gain confidence and experience and make friends, while receiving an invaluable orchestral education.”
RSO is holding its own during a challenging economy. “Other orchestras have been forced to cut back, but we’ve been able to maintain our number of performances,” says McDonough.“We want to build our audience and provide experiences that begin before the concert. We already have pre-concert lectures and SoundBites, where guest performers are available for questions. The evolution will include more multi-dimensional, visual and social media elements, the communication channels that reach younger audiences.”

In 1893, a group of Women’s Amateur Music Clubs came together in Chicago, during the World’s Columbian Exposition, to form a National Federation of Musical Clubs (NFMC). Mrs. Chandler (Blanche Ellis) Starr of Rockford was president of its first board of directors. Today, the NFMC is the world’s largest music organization, for both clubs and individuals of all ages.


Mendelssohn PAC (Mendelssohn Club) is the oldest continuous music organization in the country, begun in 1884 by Starr, who hosted evenings of live music for friends in her home on North Main Street. Today it’s in its 127th year.
“Chamber music has its roots in people’s homes,” says Andrea Gibbs, Mendelssohn PAC executive director. “The goal was to get outside the theater, to move the experience to a more intimate setting.”
Gibbs has been interim director since December 2010, having served on the Board of Directors since 2006, from 2008 as its president.
The organization hosts a full concert season, September to June, with a lineup that includes not only world-class performers but also the Mendelssohn Chamber Orchestra and the Mendelssohn Chorale, made up of performing members. Concerts are held in the Court Street United Methodist Church, 215 N. Court St., Rockford, and include one or two school outreach concerts.
“One of our main goals, absolutely, is to connect with our youth, to expand their horizons,” says Gibbs. “The most important thing about the experience is exposure. Kids get music digitally nowadays, and listen privately, even in a crowd. It’s a completely different experience live.”
Mendelssohn invites all local schools to attend, and last year drew 600 students to hear Alisdair Fraser and Natalie Haas. “They play violin and cello, but they play highland flings and jigs,” Gibbs explains. “The high school kids were clapping and jumping and dancing in the aisles. They were amazed that a fiddle and a cello – classical instruments – can rock.”
Through its Chandler Starr Miller Scholarship Competition, Mendelssohn awards scholarships in vocal, strings, piano and non-orchestral, for all ages. It also awards the High School Starr of Excellence Award, a $300 scholarship, to one senior in each Rockford public high school.
Its Music on Main series is held in the renovated Emerson House, 420 N. Main St., on the second Monday of each month, at 5:30 p.m., offering a mix of jazz, classical and world music.
Inside Mendelssohn PAC, on a recent summer day, a beautiful sonata floated through the air. Its source: the Piano Club, which meets regularly, so that members can play for one another or bring in guest performers.
“This, and Music on Main, are very much in keeping with our roots,” says Gibbs. “We’re taking the roots of our past, and branching into our future. We want to create an audience that will demand live music.”

This group was formed in 1936 by members of Mendelssohn Club and was called the Rockford Community Concert Association. It was part of a nationwide movement begun in 1930 by Columbia Artists Management Inc. (CAMI) to help smaller cities book top acts, and keep fine music alive during the Great Depression. Its slogan: “A Carnegie Hall in Every Town.”


In 1942, the venue was moved across the street, from the Shrine Temple to the Coronado Theatre, where it remains. Past performers include Van Cliburn, Beverly Sills and Itzhak Perlman. In 2003, the group broke away from CAMI and changed its name to Rockford Coronado Concert Association (RCCA).
“We made the change because it expanded our ability to contract with other artists represented by other agencies,” explains RCCA Executive Director Beth Howard. “We wanted to offer a wider variety of performances.”
RCCA presents five performances each year, a mix of classical and semi-classical, music and dance. “We bring in world-class performers and keep our prices affordable,” says Howard. “Through subscription sales and generous donors we’re able to keep prices low – just $95 for the season – and one-third donate above that.”
Each year, RCCA selects one of the season performances for its Reach for the Stars program. “We invite every fourth-grader in District 205 to attend a show that we piggyback with a public performance,” says Howard. “Everything is free, even transportation. We think it’s a special program. Even a fourth-grader knows when he or she sees something phenomenal. If we expose young people to live performance, they’ll fall in love with the experience.” This year, District 205 students will see The StepCrew, an energetic group which showcases Gaelic stepdance and tap.
RCCA also involves young local artists whenever possible. Last year, members of Rockford Music Academy attended the performance of pianist Daria Rabotkina, and Howard arranged for students to play piano in the lobby prior to curtain, during intermission and as people departed.
“The expressions on those students’ faces as people listened to them play was inspiring,” says Howard. “I was so glad that collaboration came together. I don’t want to miss one opportunity to expose children to new musical experiences.”

“This is one of the best-kept secrets in the area,” says Tim Boles, artistic director. “Once people come, they’re blown away.”
Since 1984, this Dixon, Ill., group has been providing free concerts from world-class artists like the Shanghai String Quartet and jazz pianist Judy Carmichael, and giving local artists a venue through its own ensembles.


Boles, a professional musician who worked in Chicago, moved to Dixon in 1981, and has been involved with Canterbury from its inception. Along with arranging for performers, he worked with one of its co-founders, Carol Shaw, wife of Shaw Media heir Robert Shaw, to gain nonprofit status for the Society and to form the Canterbury Foundation. “The Foundation is independent of the Society,” explains Boles. “Concerts are funded through a grant from the Foundation, along with contributions from many individual donors.”
Concerts are held in St. Luke’s Episcopal Church, 221 W. Third St., which has one of the largest pipe organs in Illinois, amazing acoustics and seating for about 200.
“Our season runs during the school year, and ranges from six to 12 performances,” says Boles. “We host organists, opera singers, visiting men’s and boys’ choruses. We also hold two orchestral performances each year by the Metropolis Symphony, which is made up of members of the Chicago Symphony Orchestra, Lyric Opera and Grant Park Symphony.”
Canterbury has three ensembles of its own. The Canterbury Singers is made up of mostly amateurs, adult and high school, who must audition. The Philander Consort is a professional singing group of 16, named after the first Episcopal bishop of Illinois. Schola is six to eight men who perform meditative, prayerful Gregorian chants on Sunday evenings.
“One of our highlight performances this year is the complete Messiah, with historic chorus and a chamber orchestra – harpsichord, organ, trumpet bassoon and timpani – following historic orchestration,” says Boles. “Part I will be in December, and Parts II and III in April 2012.” It will be sung in Baroque pitch, which is a half-tone flat, and will include different versions of the solos.
“Handel toured with this piece,” Boles explains. “It was his money-maker, and he adapted it for the region – omitted parts, changed solos. This won’t be exactly like the modern version, but closer to what Handel’s audiences heard.”
Dixon used to have a very active local theater, and Boles is working to sponsor musical community productions again. “People assume that since the concerts are in a church, and they’re free, that it’s all amateurs,” he says. “It’s not. We’ve just got to get the word out.” ❚
Tags: canterbury concerts dixon illinois mendelssohn mendelssohn performing arts center rcca rockford rockford coronado concert association rockford symphony orchestra rso
Share on
Share on Facebook Share on Twitter Share on Pinterest Share on Email
Karla Nagy July 15, 2011